Aside from encouraging modesty and religious devotion, recruitment pamphlets being handed out to maids on their days off also call for volunteers to carry out unspecified "missions" in western China's Xinjiang region. 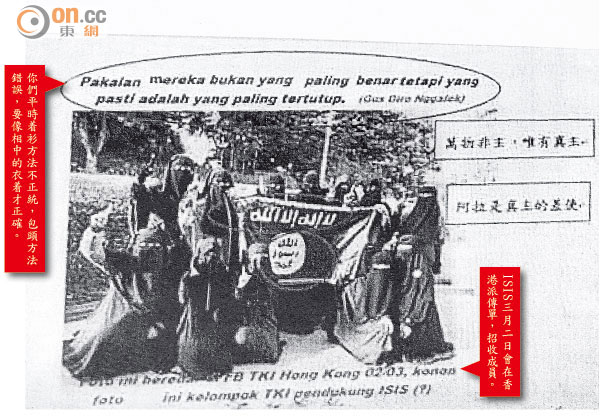 Islamic State leader Abu Bakr al-Baghdadi has previously directed his attention to the Muslim-majority autonomous region, sympathizing with the perceived oppression of the Uyghur minority and claiming, "Your brothers all over the world are waiting your rescue."

This should be decidedly concerning to people living in China, especially after the recent Uighur knife attacks in Guangzhou in the last month. One of which took place in a shopping mall less than a week ago.

Concern should be compounded by the fact Chinese authorities are not denying the issue. According to Vice News, Zhang Chunxian, the Communist Party Secretary of Xinjiang, recently stated that "around 300 Chinese extremists" had been apprehend after returning from Syria - they were apparently orchestrating an attack in Xinjiang.

Exiled Uighur leaders, who claim the links between the Islamic State and the Xinjiang region are being overstated, are refuting these claims.

On March 24, it was reportedly that one Indonesian domestic helper in Hong Kong had disappeared, leaving behind a note saying that she had left to join ISIS.