A more sinister version of the old hobo markings used by late 19th early 20th century migrating workers in the United States (watch: that Mad Men episode) has appeared in China. However, instead of useful signs to indicate whether locals are friendly or hostile to the wandering unemployed, thieves have constructed their own lexicon for tipping off other opportunists or fellow gang members on which houses to rob, with symbols that show varying degrees of difficulty. Some warn of dogs or obstacles, while others advertise empty homes.

This same tactic was noticed a while back in 2012 in Ningbo, Zhejiang when policemen translated them for citizens to be wary over the holidays. They admitted that the symbols were an evolving language, with different groups of thieves often having their own completely different 'dialects'.

A policeman has compiled some of the symbols and passed them around on WeChat. Below is the chart with the their meanings translated into Chinese and English by Lost Laowai and spread on WeChat by ChinaWire. 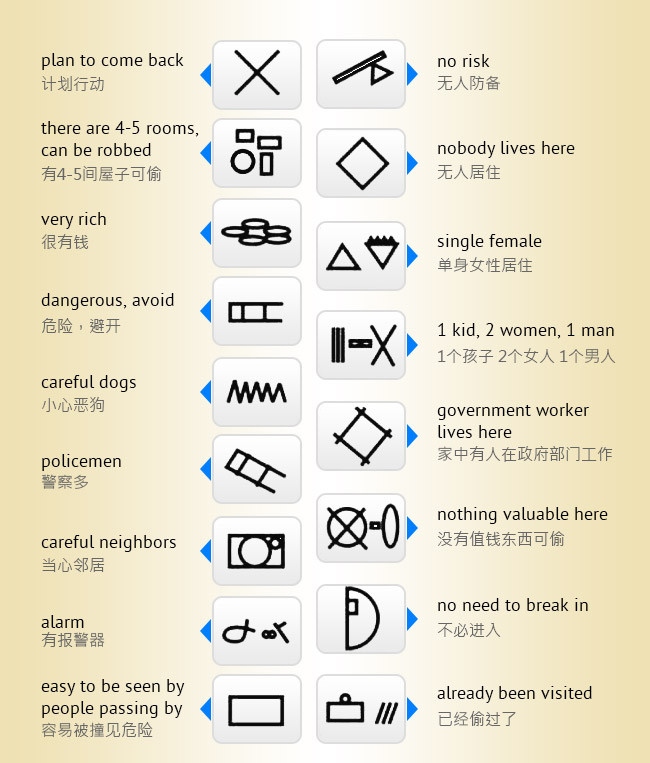 Needless to say, if you're going away this Spring Festival, make sure you lock up tight. And maybe buy a recording of a dog barking.

Or, if you've got the time, go the full Macauley Caulkin and turn your house into a thief-proof fun house as he taught us in his 90s feature documentary: Home Alone. A cleaner on a Hong Kong train made the grisly discovery of a body a newborn baby with the umbilical cord and placenta still attached yesterday morning.

Dissatisfied with her building's protection from burglars, an elderly woman in Foshan, Guangdong province, took matters upon herself and built a formidable-looking 'trash fence' around her property.