For the first time ever, adults in Shanghai are more proficient at English than adults in Hong Kong, according to the 2014 English Proficiency Index.

The data released yesterday places China 37th out of the 63 countries featured, classing it as "low proficiency." Hong Kong is ranked 31st overall, giving it the title of "moderate proficiency," though its rankings have slipped steadily since 2007. When cities are looked at instead of countries, however, Shanghai, Beijing and Tianjin all beat Hong Kong in terms of the number of adults proficient at English.

The EF EPI English Proficiency Index, however, depends on a far from representative sampling of subjects to determine its ranking.

The survey is conducted by EF Education First language training centers. No demographic information is collected from test-takers and tests are used by the company for marketing and placement purposes. According to EF, "one test is open to any internet user for free" while the second "is an online placement test used by EF during the enrollment process before students start an English course."

Test-takers, therefore, are a self-selected sampling of people who intend who enroll in an EF English course. The Shanghai residents taking the test are relatively affluent and well-educated people with a foundation in English and internet access who wish to further their studies. In other words, a small minority whose results bear no correlation to how well or how widely English is spoken by their fellow citizens.

Anyone with experience using English to navigate regionally will undoubtedly agree that the average Hongkonger has better English than the average Beijinger, and would probably also say that a greater proportion of Thais (48th place) can operate in English than Chinese (37th). Of course this is just anecdotal evidence — making it equally as scientific as the EPI. 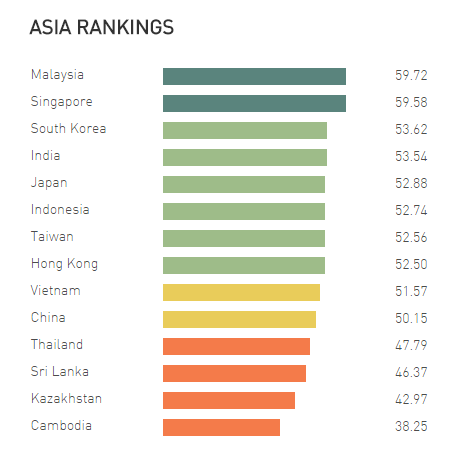 In the local Hong Kong press, the EPI findings inspired a series of grave, self-deprecating articles, bemoaning the indignity of being surpassed by upstart mainland cities.

In one way, their negativity is justified: English standards have been declining in Hong Kong ever since 1997, after which point the SAR government adopted a mother-tongue-as-teaching-medium policy in primary and high schools, and has repeatedly slashed funding for, and therefore access to, English Schools Foundation (ESF) schools.

But how far exactly have standards dropped? Without a doubt, not this far — not yet anyway. So cheer up, Hong Kong, it might never happen.