A Malaysian Airlines flight disappeared from radar at 10,000 meters last night and then crashed near the city of Shakhtarsk in Ukraine's Donetsk region near the Russian border

All 280 passengers and 15 crew members on board are reported to have been killed.

Given all that has gone before this, it is worth noting that so far no Chinese citizens have been reported to have been on board the flight. According to the latest press reports passengers include: 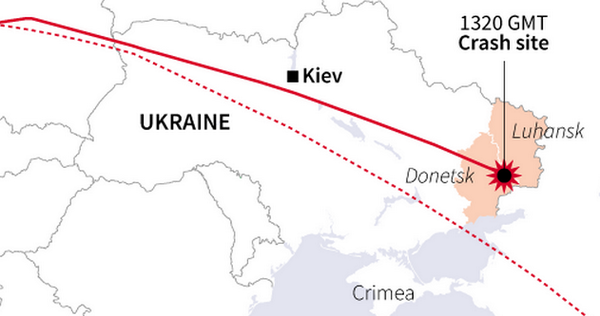 Here is what official Chinese news agency Xinhua have to say:

"A Malaysia Airlines Boeing 777, which was flying from Amsterdam to Kuala Lumpur, started descending 50 kilometers before entering Russian airspace, and was subsequently found burning on the ground in Ukrainian territory," Interfax news agency quoted an aviation source as saying.

The plane disappeared from radar at 10,000 meters and then crashed near the city of Shakhtarsk in Ukraine's Donetsk region, it said, citing Ukrainian law enforcement authorities.

An advisor to Ukrainian Interior Minister Anton Herashchenko wrote on his Facebook that "280 passengers and 15 crew members have been killed."

A group of emergencies service is on the way to the scene.

Ukrainian President Petro Poroshenko said the plane could have been shot down, but the Ukrainian Armed Forces had nothing to do with it. Prime Minister Arseny Yatsenyuk said the government has formed a special investigative commission for the incident.

The Ukrainian Prosecutor General's Office said that law enforcement authorities could not access the crash site for investigation, as it is controlled by the self-proclaimed Donetsk People's Republic (DPR).

The Donetsk People's Republic are pro-Russian militants based in Eastern Ukraine widely reported to be supported by Moscow.

BBC report that flight MH17 had been due to enter Russian airspace when contact was lost.

Ukraine's president called the loss of the plane an "act of terrorism" as the rebels denied shooting it down.

Separatists are believed to have shot down two Ukrainian military planes over the region in recent days.

Alexander Borodai, leader of the self-styled Donetsk People's Republic which is defying the Ukrainian government, has been quoted as saying a truce could be agreed for "several days" to allow investigations and recovery operations to take place.

Leading airlines have announced they are now avoiding eastern Ukraine.

Accusatons levelled at the Donesk People's Republic were immediately denied by the leadership of the DPR.

"The plane was shot down by the Ukrainian side. We simply do not have such air defense systems, our MANPADs have a firing range of only 3,000 to 4,000 meters, while passenger jets fly at a much higher altitude," Interfax quoted DPR officials as saying.

The militants said they did not rule out that the plane could have been brought down by Ukrainian servicemen.

Those denials were subsequently rejected from the Ukrainian faction.

An adviser to the Ukrainian interior minister, Anton Herashchenko, alleges that the plane was hit by a missile fired by a Buk launcher - a Russian-made, medium-range surface-to-air missile system.

Ukraine has accused Russia's military of supplying advanced missiles to the rebels.

If true it would indeed rubbish claims made by the DPR, as the Russian-made, mobile, medium range system, also known as SA-11 Gadfly (or newer SA-17 Grizzly), is equiped with four Mach 3 surface-to-air missiles with a maximum target altitude of 22,000 metres.

Ukrainian authorities insist they are in no doubt as to what has happened.

US President Barack Obama has said the crash of the airliner was a "terrible tragedy" and has already spoken to Russian President Vladimir Putin about the crash, it has been reported.

The incident is already being described as a "game changer."

As Jonathan Marcus of the BBC writes:

If it does turn out that the Boeing 777 was shot down by the separatists - with weaponry supplied by Moscow - then it could significantly alter the terms of the whole debate surrounding the Ukraine crisis.

Over the past few days there has been growing concern among Western governments that Russia was stepping up its military support for the separatists in eastern Ukraine.

Nato spokesmen insist that more and more heavy military equipment has moved from Russian stockpiles to the separatists across the border.

In response, the United States has strengthened its economic sanctions against Moscow - it is threatening even stronger action - though the European Union has so far failed to follow Washington's lead.

But if Russia in any way had a hand in this tragedy then the pressure - especially on the Europeans - for much tougher sanctions will only grow. Here is the full transcript from missing Malaysia Airlines flight 370

On Tuesday, Malaysian authorities released the complete transcript of the conversation between missing flight MH370's crew and air traffic controllers.

In the wake of the disappearance of flight MH370, China’s travel agencies have reported a sharp drop in interest for its trips to Malaysia, with some travellers even cancelling already booked tours to the country.

It's starting to become clear that God has beef with Malaysia Airlines: two flights had to make emergency landings in Hong Kong and Nepal Monday.

The sad saga of missing flight MH370 took a turn for the ridiculous this week when Malaysian authorities hired a bomoh, or shaman, to help find the plane.

Missing flight MH370 flew off course for an hour at low altitude, before vanishing from radar screens at around 2.40 am local time Saturday, Malaysian military sources said Tuesday night.

Hijacking, mid-air disintegration ruled out as cause of missing Malaysia Airlines flight

The Chinese Embassy in Malaysia has told Xinhua on Monday said the Malaysia has dismissed media reports that hijacking, mid-air disintegration and radar malfunction led to the disappearance of MH 370 flight.