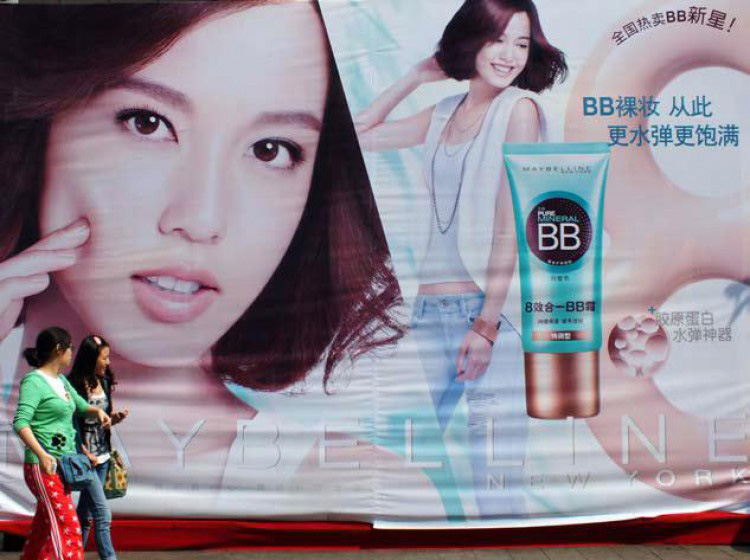 Every morning, 24-year-old Beijing office worker Wang Yan wakes up at 5.30am to give herself enough time to complete her daily beauty regime before her journey to work three hours later. Like many young women her age in China, Wang invests a significant amount of time and money in cosmetics. It’s a trend that has helped propel the country’s beauty industry to record profits. Last year, Chinese consumers spent USD25.9 billion on beauty products, making it the country’s fourth largest sector for discretionary expenditure. Only houses, cars and travel rank higher.

“In China, your face really is your card to the world,” says Joanna Hutchins, former Unilever Global Brand Director for Skin Care at Pond’s and current Managing Director of Dragon Rouge, a global brand consultancy that counts almost 30 beauty brands among its global clientele. “And that’s the case for both men and women.

The way you look, the quality of your skin, whether you appear tired or stressed – those have all become concerns of paramount importance to the Chinese middle class.” This concept of mianzi (face), a social construct that runs deep within Chinese culture and relies on a person’s surface appearances to reflect his or her status, is an important industry driver. White-collar women alone spend an average of 30 percent of their total income on cosmetic treatments and products. 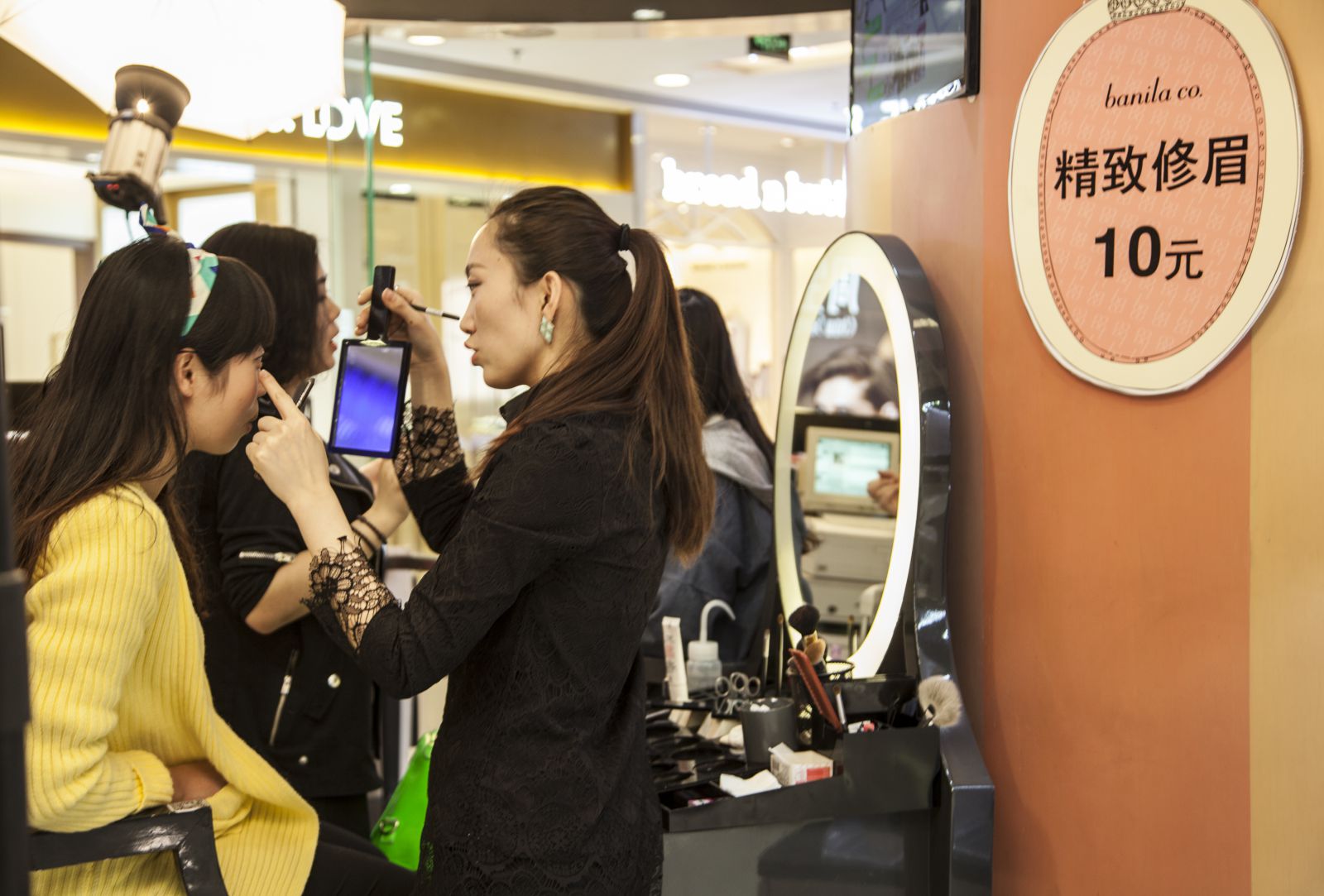 Men are not far behind. According to research firm Euromonitor, the grooming sector – the second largest worldwide after South Korea – has seen an annual growth of 29 percent between 2009 and 2014, compared to 5.7 percent in North America and 7.9 percent in Europe. In a recent survey by consumer research firm Kantar Worldpanel, a whopping 73 percent of Chinese men in China’s leading cities believe that looking good is essential for success with both women and work.

As Chinese GDP continues to grow, so does the local appetite for skin care products, fragrances and men’s cosmetics. “You don’t see anything like that anywhere else in the world,” says Hutchins. “Consumers perceive beauty purchases as investments in their career, private life and social success. They consider appearances a major asset to their persona. Women want to transform, while men are not as interested in looking different as they are in looking perfect.” 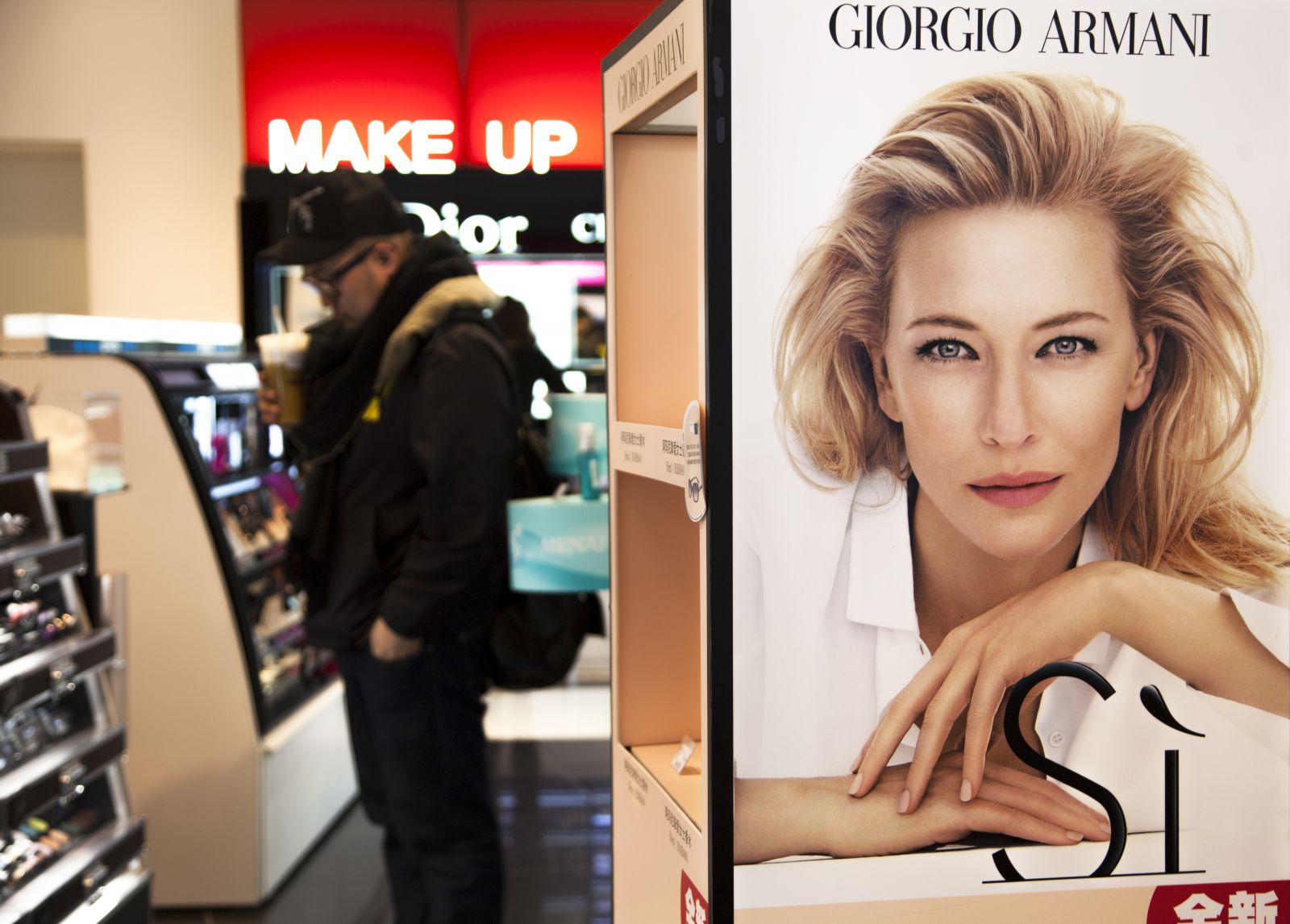 Interestingly, such obsession for a flawless and healthy image often only extends from the neck up. Chinese shoppers aren’t as interested in body products – preserving one’s pale skin by layering on clothes, even in summertime, is still common.

Facial skin care forms the most popular sector among the local market. Whitening products are the nation’s highest sellers, followed closely by new-fangled, China-centric hydration products – which now represent almost one-third of all facial moisturizer sales in China. It is, quite literally, all about face.

“You don’t see anything like this anywhere else in the world. Consumers perceive beauty purchases as investments in their career, private life and social success”

“Protecting my skin from the sun is quite important to me,” says 25-year-old Li Haitong, as she browses the store’s selection of pricey, colorfully-packaged balms. “I like to keep it hydrated and natural-looking. Hanskin BB Cream is great for that, but I also use a lot of Laneige products.” Cost, she says, is not an issue. “As long as I can be assured of the quality of the brand, then I’m happy to spend the money.”

Both Laneige and BB Cream are Korean companies. In China, they are household names – no doubt due to their connection to South Korea’s hugely successful pop culture wave, the so-called hallyu, which drives Seoul's growing influence across Asia. 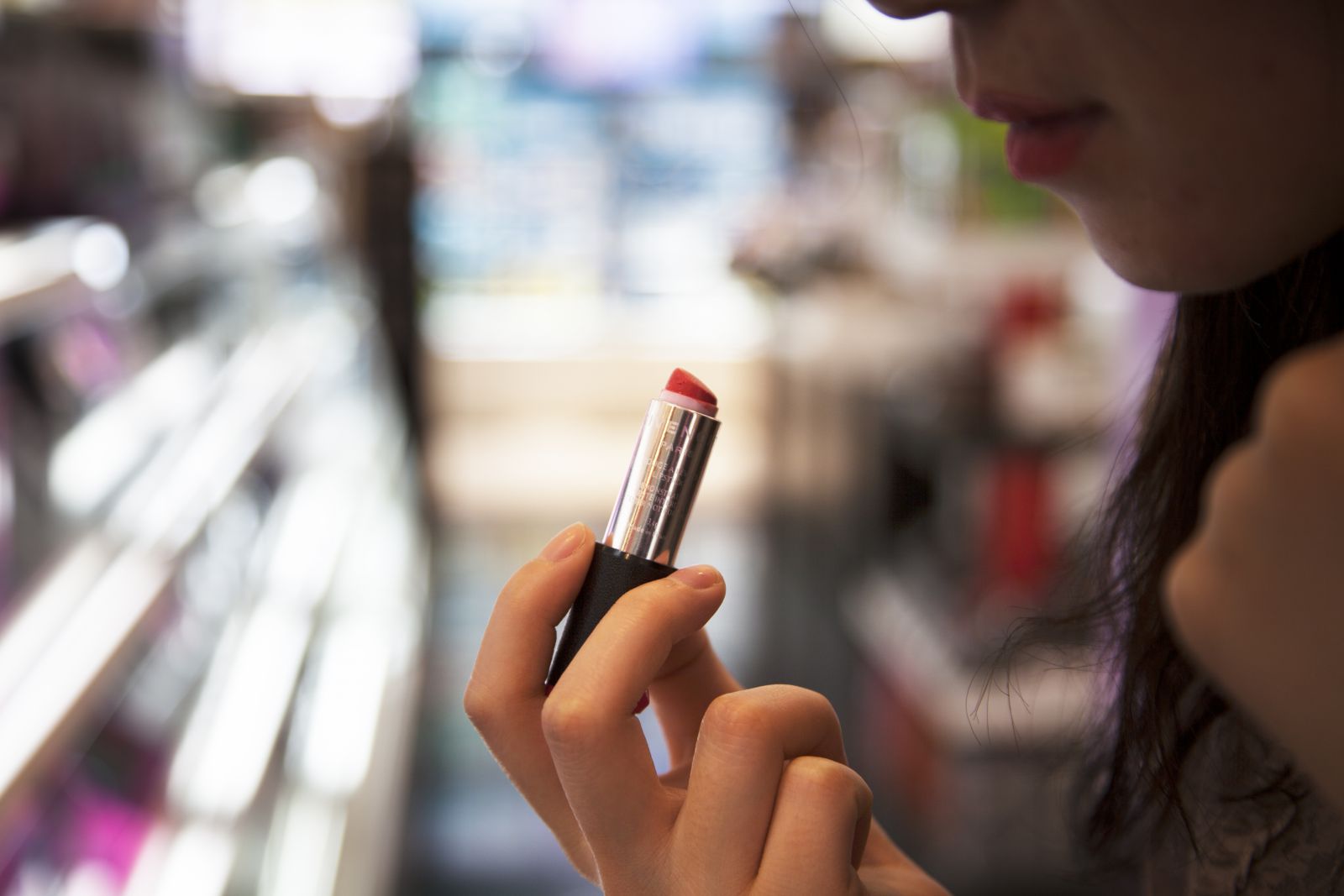 Riding on the Korean soap opera and K-pop crazes, these beauty brands from the Land of the Morning Calm and further afield, have adopted perfectly-groomed Korean celebrity ambassadors such as actress Song Hye-kyo, singer Yoona and male entertainer Kim Hyun-joong to advertise products in China. In the process, they have also taken market share away from established western players.

“Korean cosmetic companies are shaping an aspirational idea of beauty through clever, celeb-centered advertising that really resonates with the local market,” says Hutchins. “If you had walked into any department store just a few years ago, you would have seen lower-end brands like Olay, Lancôme, Nivea or Pond’s filling up the shelves. Now, they are all being pushed out to make space for high-end Korean products. The whole retail scene is changing.”
At the end of December, US beauty firm Revlon announced it would pull out of China. One week later, French giant L’Oréal, the world’s largest cosmetics company and China market leader, joined its rival by halting sales of its Garnier beauty and hair products in the PRC. According to Euromonitor, both Procter & Gamble and Avon have also lost market share in the skin care business in the six years leading up to 2012.

Most importantly, as product ranges expand, shoppers are no longer interested in paying premium prices for brands that are not necessarily the very best in terms of quality. And while many western companies have missed this shift, Korean firms have been quick to keep up. “I prefer Korean brands,” says recent graduate Wang Yan. “They are ahead of the trends and use better technology. Whereas western brands are developed for western faces, Korean products are developed especially for Asian skin tones.”

Showing sensitivity to Asian beauty habits and an understanding of Mainland consumers’ concerns, Chinese companies like Herborist and Inoherb have also found increasing popularity within the sector – the two firms are the first and second largest domestic brands in the skin care sector – often opting for a more expansive approach to beauty that integrates TCM principles or natural therapies. According to market research company Mintel, this addresses the wishes of 37 percent of the market. It’s no surprise that home players are doing so well.

"In Asia, for the first time, Europe and America have had very little influence on beauty"

In addition to the cultural and historical ties binding Chinese consumers to TCM-based remedies, natural alternatives are seen as less toxic than their chemically-inclined cousins, a selling point for savvy consumers who have grown up confronted by a barrage of product safety scandals.

“There’s been a tremendous change over the last three years,” notes Hutchins. “In Asia, for the first time, Europe and America have had very little influence on beauty. It used to be all about the West influencing the East… now the East is looking up to itself and its own culture, as there’s a fundamental belief that Asian skin is different from western skin. Next, the continent will be telling the rest of the world about beauty trends.”

China’s beauty market is also molding its very own traits and identity via online retailers. E-platforms account for 20 percent of all sales in the country, often offering a wide range of brands at big discounts – which, again, takes a toll on foreign rivals. 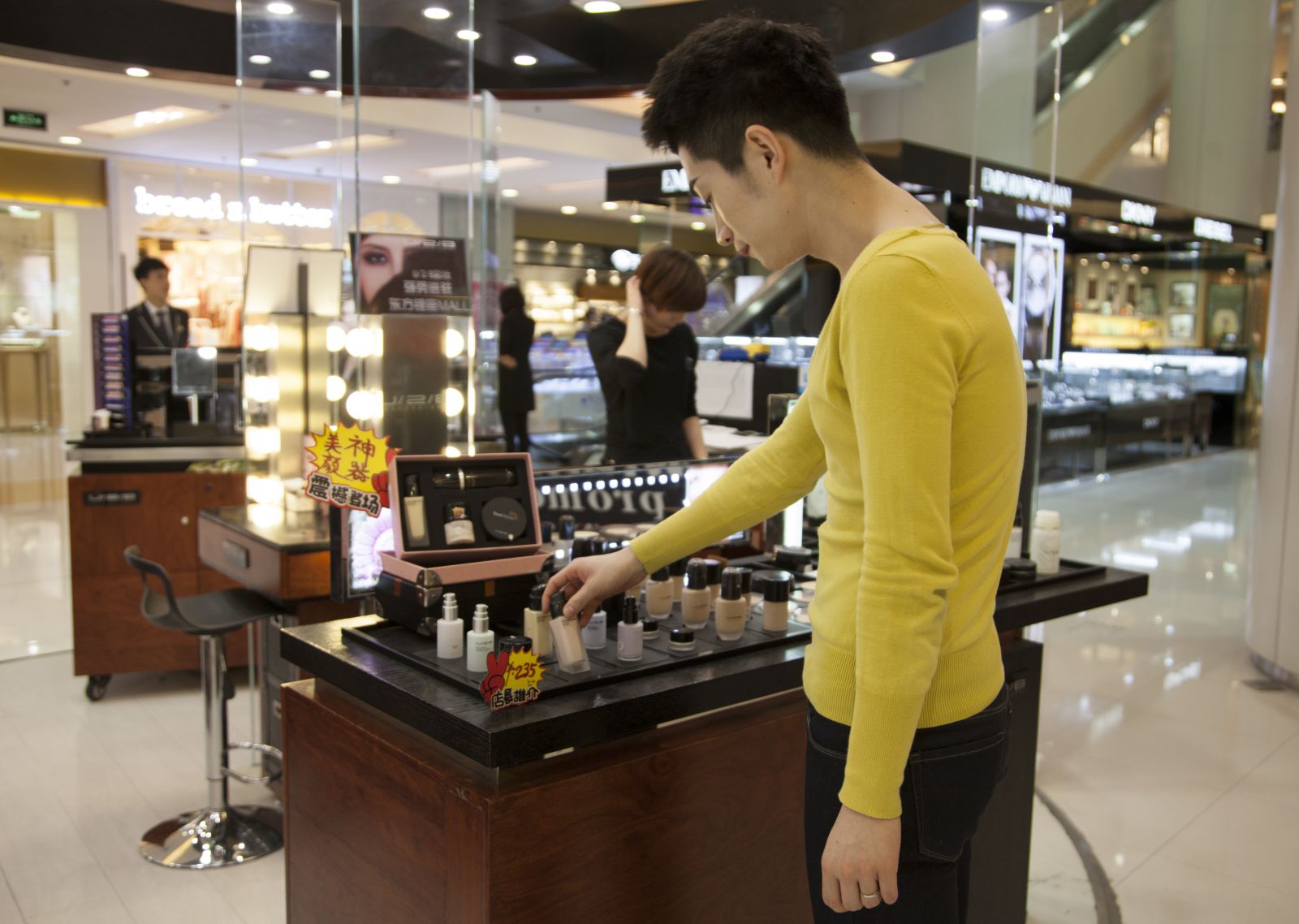 According to Mintel analyst Chen Wenwen, the key to long-lasting success lies in the right balance of online and offline branding.

“The beauty retailing market continues to perform strongly, but in order to increase expansion, integrating both online and offline channels becomes a must,” she says. “Affluent consumers are still longing for memorable in-store shopping experiences, and that remains essential in the long-run.”

Meanwhile, there are even some Asian products that have been making headway in the western beauty world. Having debuted in both the US and Europe in 2011, BB creams have seen growth rates of around 30 percent in the West according to Euromonitor, becoming cult beauty products in the global market.

At the same time, recent news that the China Food and Drug Administration will loosen its regulations surrounding animal testing for cosmetics from June 2014 is likely to stir new interest among a number of beauty brands previously blocked from the Chinese market entirely, pushing the sector to increasingly competitive levels.
“Every major player in the industry is looking to win a bigger slice of China’s beauty market pie,” says Hutchins. “The country may not be the most trend-setting in terms of products yet, but it’s definitely leading when it comes to customer needs and development.

“The Chinese want better products and that’s driving new retail strategies and marketing messages from all companies involved – both western and Asian. If someone is shaping the sector in that respect, that’s the Chinese consumer.” 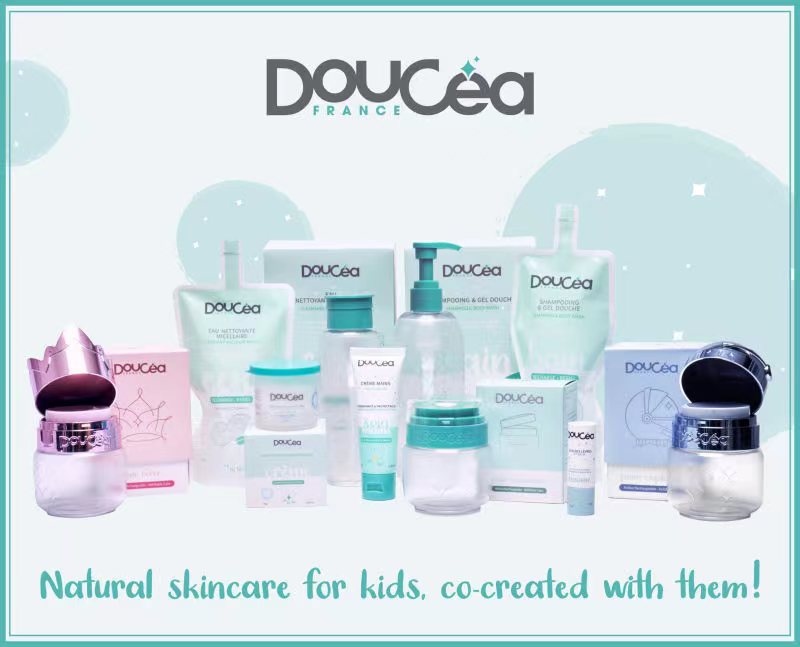 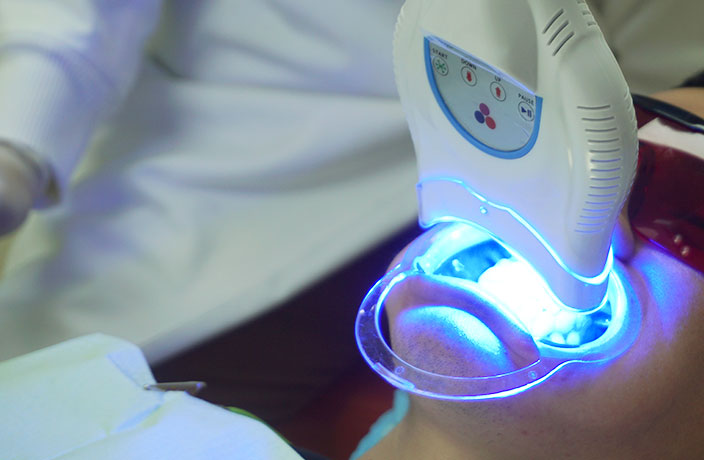 We Tried Professionally Whitening Our Teeth in China, Here Are the Results

On a quest for pearly whites...

Meet the Man Who Brought Harley-Davidson to China

Born to be wild.

Another Controversy Sparks Debate on Beauty Among Chinese Netizens

Model Gao Qizhen was likened to the characters from Avatar by some mean-hearted commenters.

Are freckles pretty or ugly? Netizens weigh in.