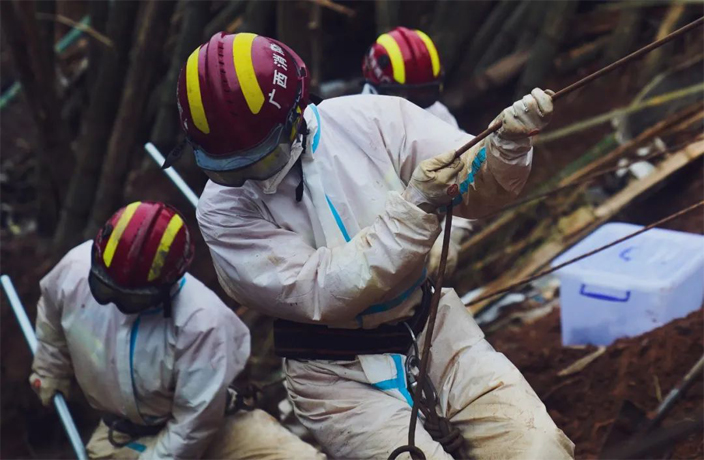 On March 21, China Eastern Airlines Flight MU5735 rapidly descended and crashed into the mountains of Guangxi Zhuang Autonomous Region. Seven days later, after both of the aircraft’s black boxes had been discovered, all 132 passengers and crew were confirmed dead.

Teng Xingwen was born in 1994. In 2019, he was recruited by the National Fire and Rescue Team and joined Nanning Fire and Rescue as a first response firefighter. On the day of the fatal plane crash, he was selected as a member of the first response team to reinforce rescue efforts in Wuzhou. During his time stationed at the crash site, Teng recorded his journey on the search for clues and survivors.

The below text has been translated from the personal diary Teng wrote during the days he spent at the Flight MU5735 crash site, as reported by China News.

I Encountered Something Terrible Today

That afternoon, I was in the study room of Special Duty Station 2, copying my reading notes. Suddenly, the bell rang and I dropped my pen and ran to the fire engine, ready to go as normal. Captain Wang Jiangang pulled me aside and said, "Count the number of people and equipment, we’re sending reinforcements to Wuzhou."

Before I knew it, Captain Wang had already taken out a list of firefighters and was choosing the reinforcements, one by one.

"The reinforcements must have experience with such missions, we need highly skilled staff of sound body and mind in order to be able to keep up with the rescue efforts," Captain Wang said. Captain Wang quickly confirmed the list of reinforcements, and my name was on the list.

With no time to collect personal belongings, my teammates and I hurried to Wuzhou. On the way, I saw the news about the accident on my phone. I knew right then that I was about to encounter a terrible situation.

At that point, there was only one thought in my mind: as long as there is a glimmer of hope, I will work 100 times harder.

At 9pm, reinforcements arrived at the assembly point. The situation was complex; headquarters were discussing how to approach the search and experts were formulating the corresponding rescue countermeasures. We set up a makeshift tent and awaited orders.

Close to midnight, we set up our temporary shelter. The weather in Wuzhou was hot and stuffy and we were so desperate to help that we could hardly sleep.

At night, I called my mother and told her that I was at the scene of the plane crash. She said: “Keep safe. If you can even save one of them, it will be a good thing.” I touched my face and realized I was crying, I said: "Mom, life is really precious and I want to hug you."

Before dawn, the team began mission training. Experts explained the procedures of air crash rescue and work discipline. Search and rescue was our main priority, while the remains of the excavation were to be collected and handed over to the Public Security Criminal Technical Department. Airframe wreckage was to be analyzed by the Civil Aviation Expert Group.

We then received orders from Forward Command to prepare to enter the mountain. My teammates and I stood against the wind, feeling the weight of the world on our shoulders.

A Race Against Time

When I arrived at the scene, I saw that the plane debris was like snowflakes all over the mountains. The road around the crash site was busy with traffic. Several large construction machines were densely distributed in the small working area for the search and rescue.

Epidemic prevention and control was not neglected. We were disinfected before entering the mountain and had to wear full PPE, including hats, masks, hazmat suits, gloves, masks and shoe covers. Every inch of bare skin was covered.

We weren't allowed to remove the protective clothing, so going to the toilet was not convenient. The captain prepared adult diapers for us in advance. I was a little shy about wearing them for the first time in my life.

The team leader divided the search and rescue area into grids and we took turns searching the area. A group of six of us were organized into a specialist team, focusing on tackling steep and difficult slopes.

We turned over the mountain looking for survivors, the hillside was dangerously steep, overgrown with weeds and part of the slope was at a 70 degree angle. It was difficult to climb, but my teammates and I never gave up. We attached a fulcrum to a nearby tree trunk and used rope to lower ourselves down, inch by inch.

When night came, all the search and rescue team members took out their torches and we lit up the mountain together.

The next day, the weather suddenly turned cold. The logistics support group sent thermal underwear. We began to dig and search the core area.

Combined with the aircraft landing gear we found earlier, the emergency positioning launcher and other physical evidence, experts were comprehensively studying possible clues to the locations of the aircraft’s two black boxes, constantly revising the direction of digging and gradually narrowing the search area.

One task was to transport a group of large wing parts from the hillside. The wing was heavy and the soil was soft, so it was deeply embedded in the ground from the fall and it was difficult to ensure its integrity during transportation.

The rescue team tied a rope around a tree to lever the wing from the ground. The tail of the wing was still attached and the dirt was removed by hand.

On the night of March 23 there was heavy rain and thunder. The follwing day, we received orders that the search area was to be expanded by 1.5 times its original size, in order to find the black boxes. Mud was flowing all around us and our feet kept sinking deep into the sludge.

I thought that because the plane had flown directly down to the ground, the black box could be at the bottom of the mountain, so I went to look. After finding a firm place to stand I began to dig.

As I was digging, my feet became covered in mud and I was getting colder and colder. After a while, I was up to my thighs in mud and no matter how I much moved or pulled, I couldn’t get out. I used my hoe to dig around my leg but the deeper and deeper I went, the more the area around me began to fill with water.

When the captain saw my situation, he immediately grabbed my safety rope and pulled me out. Looking back into the hole I could see I’d lost a shoe. The captain quickly issued a reminder to the search and rescue personnel at the scene, “the soil is soft because of the rain, pay attention to your footing and safety.”

A Test of Sweat

Temperatures were gradually rising and several teammates developed symptoms of heatstroke during the search and rescue. The captain divided the personnel into several formations, taking turns to ensure we didn’t burn out.

At the end of a busy day at work, my goggles were so full of condensation that it felt like the bridge of my nose would collapse. My ears were badly cramped and burning from the string on my mask.

You know what the happiest moment on-site is? Seeing a large two-liter bottle of mineral water.

In order to prevent injury, we wore emergency suits on the inside and hazmat suits on the outside. When I would raise my hand, a stream of water would run down my arm.

When teammates took off their boots, sweat came streaming out like rainwater. "Wearing these shoes is like wading through a river," one teammate said.

Every day back at the resting station, we were too exhausted to feel hungry, but we forced ourselves to eat. We knew we had to hold on, work faster and keep hanging in there. We needed to find the black boxes.

There was a psychologist on the team who would do psychological assessments on the team members. After the end of each search and rescue session, the team held a review and commendation meeting. The captain read letters sent to us from the public, which greatly boosted the morale of the team.

I am the Blue Flame

We met the victims' families at the entrance of the rescue site. We stood at attention, took off our hats and bowed in silence for the victims. The sound of sirens began to blare from the hall. That night, I prayed.

Although this world doesn’t have superheroes, every person is a ray of light in the dark night.

On March 27, I received orders to return to the station with some of my team, while others continued with the search.

During my seven days at the crash site, I worked with thousands of workers from all over the country to respond to the disaster.

Together, we found the black boxes and recovered over 30,000 pieces of wreckage and debris, covering an area of over 9 million square meters. I'm proud that I was part of this search and rescue team. 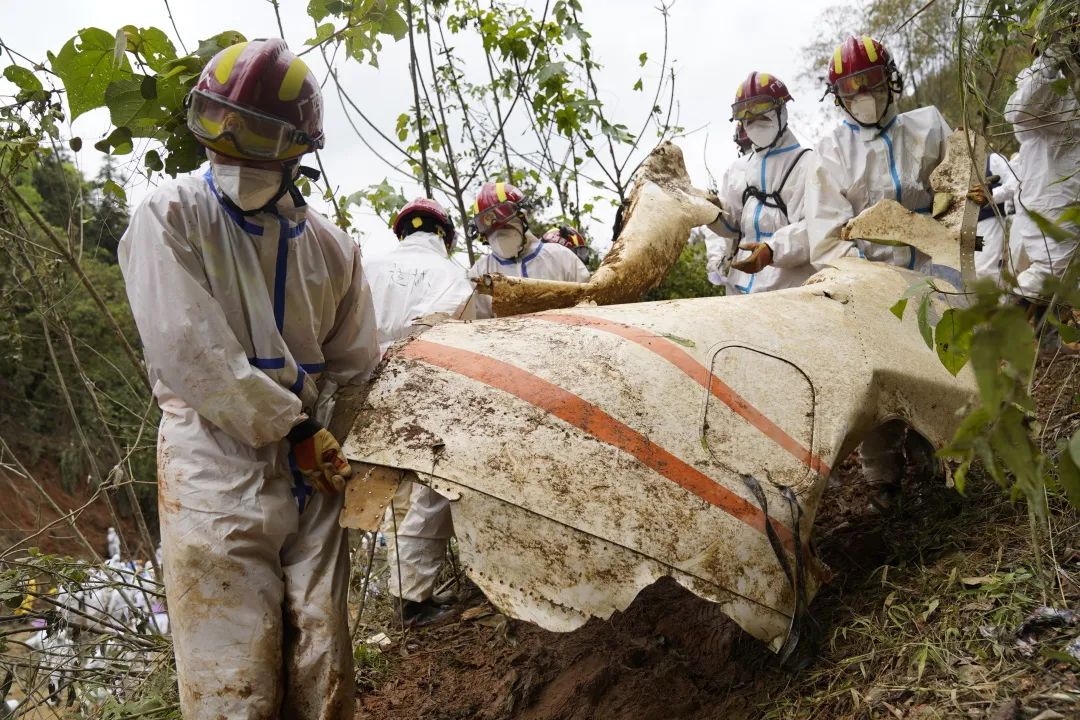