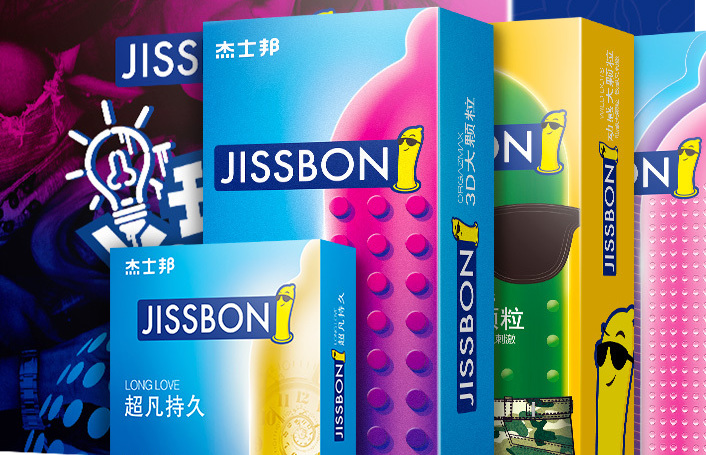 Chinese domestic condom brand Jissbon has been caught with its pants down over a sexist and degrading ad campaign.

The advertisement, posted on Taobao over the weekend, suggested that the level of happiness that a women felt in her marriage was measurable by six drawings of vaginas featured in the post.

The implication that a vagina loosens over time as a result of sexual activity was immediately met with a barrage of bewildered criticism, and the post was removed after just 70 minutes, according to Sixth Tone. 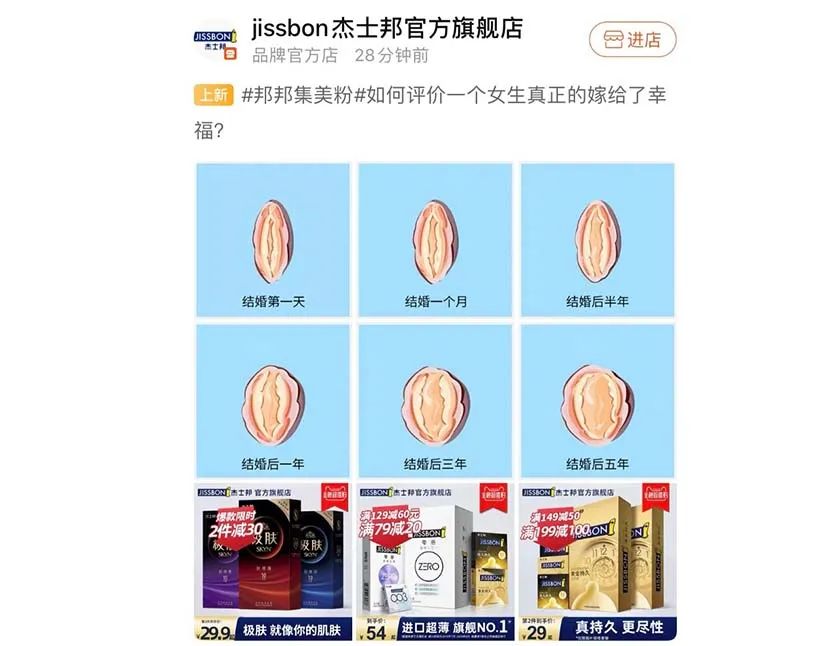 The original ad which was promptly deleted. Image via 扒圈老鬼/Weibo

Nonetheless, the ad had been captured and continued to garner insults and frustration from Chinese netizens on social media.

Firstly, people called out the physiological inaccuracy of the ad. Health-focused anti-misinformation platform Dr. Dingxiang refuted the implication in a Weibo post on Sunday.

In addition, Chinese netizens expressed revulsion at the notion that this was the only standard for a woman’s happiness, and that Jissbon should be ashamed of allowing such a misguided advertisement to go public. One user suggested that the “greasy hate[ful] pseudo-scientific advertisement” was designed by a lonely male with a negative view towards women.

The company released an apology on Sunday, promising to tighten oversight on content review. Ironically, the apology also encouraged the public to continue “monitoring and reminding them in real time.” Whether this was a genuine oversight by Jissbon or an elaborate low-brow publicity stunt will remain to be seen.

This is not the first incident with contraception advertising in China.

Despite sexuality becoming a much more approachable subject among China’s younger generations, some brands have crossed the line with inappropriate marketing campaigns.

In April 2019, Durex and cheese-foam tea brand Heytea engaged in a sexually explicit discourse on Weibo which involved an innuendo about ‘not wasting a drop of Heytea’s cheese topping’ and the audible interpretation that 4/19 sounds like ‘for one night’ when said aloud in English. According to the Global Times, Chinese netizens dubbed the exchange vulgar and pornographic.

On the other hand, Chinese netizens were quick to denounce the removal of a series of murals by Japanese condom brand Okamoto from a Shenzhen subway in 2019. The murals did not feature any sexually explicit imagery or language with perhaps the exception of a train speeding into the center of the number zero. Progressive netizens commended the campaign for being tasteful, SUPChina reported.

Durex, which holds triple the market share of condoms than Jissbon domestically, is well-known in and out of China for clever advertising campaigns that use social media and play on current events.

In June 2011, Durex took advantage of the torrential downpours in Beijing and began a campaign on Weibo of reposting pictures of people wearing condoms on their sneakers to keep them dry. The campaign went viral and garnered 500 million hits over the next two years, according to Vox. 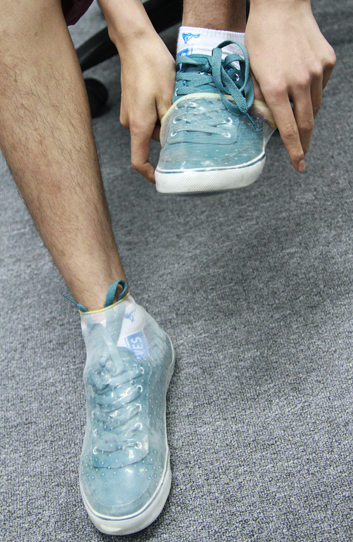 A Chinese netizen puts condoms over shoes to keep them dry. Image via @路易微顿/Weibo

Netizens have reacted to the incident by calling into question the female driver’s footwear.

A trio of poorly behaved foreigners in Foshan have found themselves in the crosshairs of Chinese social media users.