To celebrate Children’s Day, shopping malls might usually call in clowns or giant mascots. This year in Guangzhou, though, shoppers were treated to an impromptu walrus show inside a mall. A netizen posted a photo of the shocking scene on Weibo yesterday, which shows the walrus surrounded by spectators on the second floor of Grandview Mall, in the city’s Tianhe district, which is home to the controversial Grandview Aquarium. 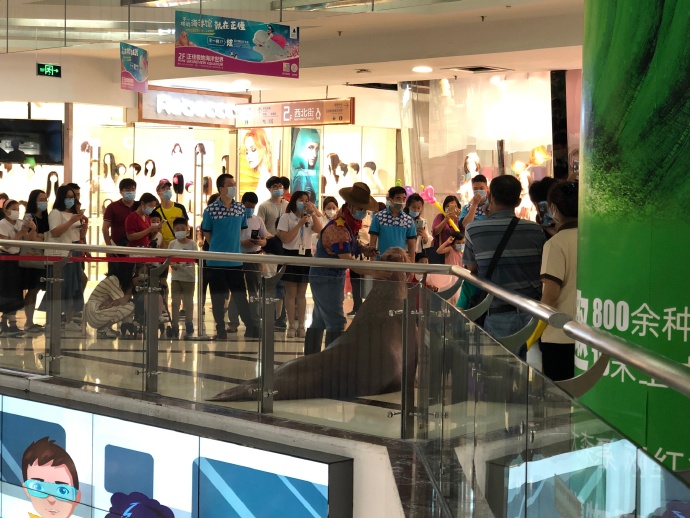 The mall has a score of 2.2/5 on Google reviews, with many netizens calling to boycott the shopping center over inhumane practices and conditions at the aquarium. A top commenter on Weibo wrote, “Grandview Aquarium is really disgusting, there have been reports of abuse of polar bears before.” Another netizen added, “A place famous for animal cruelty.”

The original Weibo poster was outraged by the scene and has already filed a complaint via the Guangzhou public service hotline (12345). That’s contacted Grandview Aquarium twice to inquire about why the walrus was outside of its enclosure, and a staffer told us, “that doesn’t happen … [the walruses] are always inside the aquarium.”

The mall’s animal attractions first made headlines back in February of 2016, when the aquarium was criticized for the beluga exhibit’s dirty water, a dead grouper floating in a tank and the tiny whale shark enclosure. Animals Asia, a Hong Kong-based animal welfare organization, stated at the time that the conditions at Grandview Aquarium were “horrifying” and described the attraction as a “prison for animals.”

The zoo’s polar bear exhibit drew international outcry the same year. Dubbed the “world’s saddest polar bear” by numerous media outlets and animal rights groups, ‘Pizza’ the bear made headlines in June 2016 when video footage surfaced showing the large Arctic animal living in appalling conditions. The video stirred calls for a boycott of the facility and led to the creation of an online petition demanding the aquarium’s closure.

Walruses are blubbery mammals, often found near the Arctic Circle and usually spend two thirds of their lives in the water. According to the China Cetacean Alliance, which also commented on the post, the walruses in China are “wild-caught in Russia.” Living in an aquarium, let alone waddling around a shopping mall in Canton, is far from their ideal natural habitat.