Given the rising number of coronavirus cases in other parts of the world, sentiment towards non-Chinese nationals in the PRC has taken a hit.

Recent measures implemented by the Chinese government to prevent imported COVID-19 cases have included mandatory testing and quarantining either at home or in a centralized facility for all international arrivals. And starting midnight on March 28, foreigners with valid visas and work permits will be temporarily barred from entering the country, according to China’s Ministry of Foreign Affairs.

The recent announcement suspending most foreign passport holders from entering the country has been a trending topic on Weibo, with more than 27 million users tuning in and commenting on the matter. “Commendable, it’s a sensible act given the current circumstances,” posted one netizen in response to the news. The announcement came on the same day that Vice Foreign Minister Luo Zhaohui revealed that 90% of the country’s imported COVID-19 cases are Chinese passport holders returning from overseas.

But despite the much lower percentage of foreign nationals infected with COVID-19 entering China, attitudes toward foreigners in the PRC have worsened to some degree.

We’ve been in touch with foreign nationals that have experienced it firsthand, including an Australian national named Ben who was recently refused entry into his local gym in Guangzhou because of new rules from the facility’s property management.

“The person [at] the door was polite to me. I was told that foreigners were not permitted to enter the gym due to the virus situation. I insisted that I’ve been in Guangzhou since before the outbreak began and that I can use the SuiKang app to show my green status. He told me it’s due to the building management’s policy,” Ben tells us, adding that he’s been a regular member at the gym for around two years. Ben goes on to mention that he’s had no other negative experiences in Guangzhou, and that most people in the city treat foreigners very warmly.

Another Guangzhou resident and business owner, Mahesh, is a member at the same gym and paid a visit on Friday, March 27. “They said temporarily foreigners are not allowed,” Mahesh tells That’s. When he responded that he’d like to file a complaint, staff told him “you do what you have to do, there’s no way we can allow foreigners at the moment,” before adding that he was “breaking the law.” 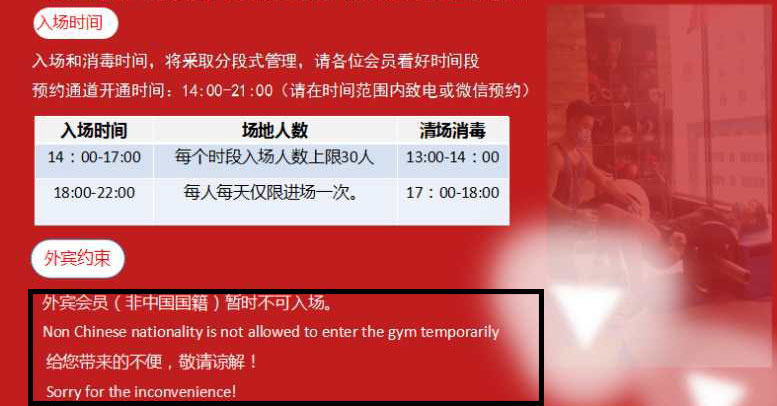 According to Ben, the gym staff told him that foreigners would be allowed to come back in May.

The temporary ban on foreign nationals extends beyond fitness centers. In mid-March, a coach station in Zhuhai refused to sell a bus ticket to a British man named Tom due to his nationality. After handing his passport to the staff member at the bus station, she said that “the company isn’t selling tickets to people from the UK.” Despite the fact that Tom had traveled to Zhuhai via the same bus company three days prior, the staffer maintained that “the company policy is that they aren't allowing UK citizens to buy tickets.”

Additionally, residents in Shenzhen have said that Huaqiangbei market, a well-known shopping destination for electronics and other gadgets in Futian district, recently barred foreigners from entering.

FeelMore Coffee&Bagels, a Guangzhou eatery popular among expats and locals alike, recently sent out a notice on WeChat informing customers that foreign nationals would not be allowed to enter the community where the shop is located. A staff member told us over the phone that the community’s property management were temporarily barring foreigners from entering in light of the coronavirus situation outside of China. On Thursday, the shop wrote to us via WeChat, saying “We are currently working closely with the community management and security team attempting to establish some grounds for them to allow foreigners to enter.”

Fortunately, FeelMore announced on Friday that “after constant discussion with the property management, all people can now enter and leave the community normally” as long as they can provide their passport, a personal travel record from their mobile operator and their Sui Kang health code. 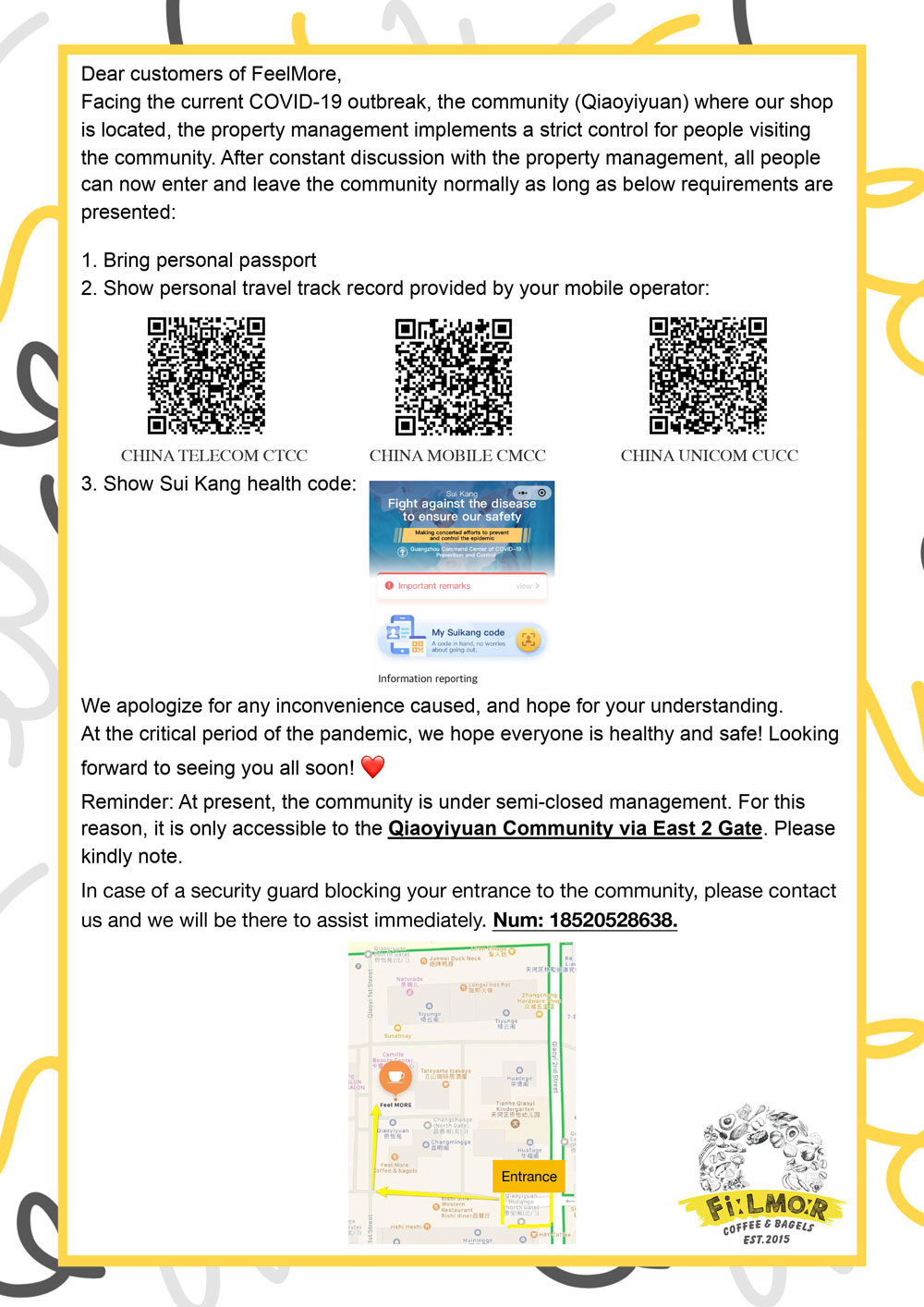 A notice to FeelMore customers on new requirements to enter the community in which the shop is located. Image provided by FeelMore Coffee&Bagels

While health and safety are certainly a top priority during this pandemic, this shows there are better alternatives than simply refusing service to non-Chinese nationals in the PRC.

In Western countries, anti-Asian sentiment has also been dialed up since COVID-19 began to spread overseas. People of various Asian backgrounds have been ostracized and harassed, in addition to being verbally and physically abused in some cases, due to the virus’ link to China. Julie Kang, an Asian American in San Diego, shared her experiences with Vox about anti-Asian xenophobia amid the COVID-19 pandemic. On the day the first confirmed COVID-19 case in her city was reported, a women threatened her by yelling, “Go back to China or I’ll shoot you myself,” as cited by Vox.

Anti-Asian sentiment in the US has been fueled by the government’s top brass. Despite the WHO officially dubbing the coronavirus disease ‘COVID-19,’ President Donald Trump, Secretary of State Mike Pompeo and other US lawmakers have continually referred to the virus as the ‘Chinese virus’ or ‘Wuhan virus,’ further increasing tensions between the two global powers.

On Wednesday, US Representative Grace Meng introduced a resolution to denounce anti-Asian sentiment caused by the coronavirus, according to a press release on the US House of Representatives official website. In a statement, Meng says, “During this time of heightened anxiety and fear surrounding COVID-19, we cannot lose sight of protecting the health and safety of every single person – no matter their race, ethnicity, or background.”

Looking to share your experience in China in the aftermath of the COVID-19 outbreak? Contact me via email at ryangandolfo@thatsmags.com