With many of China’s factories still closed or operating at a limited capacity as a result of the epidemic, the country’s skies, well, have never looked bluer.

Satellite images from NASA and European Space Agency (ESA) show that pollution has cleared over China due to the stringent measures put into place to curb the virus.

The data from pollution monitoring satellites show that nitrogen dioxide (NO2) levels have significantly decreased and have not returned to pre-Chinese New Year levels as seen in 2019. Nitrogen dioxide is a harmful gas emitted by motor vehicles, power plants and industrial facilities.

Scientists at NASA first noticed the reduction of the noxious gases starting with Wuhan in January. As the virus progressed, pollution levels decreased across the country. 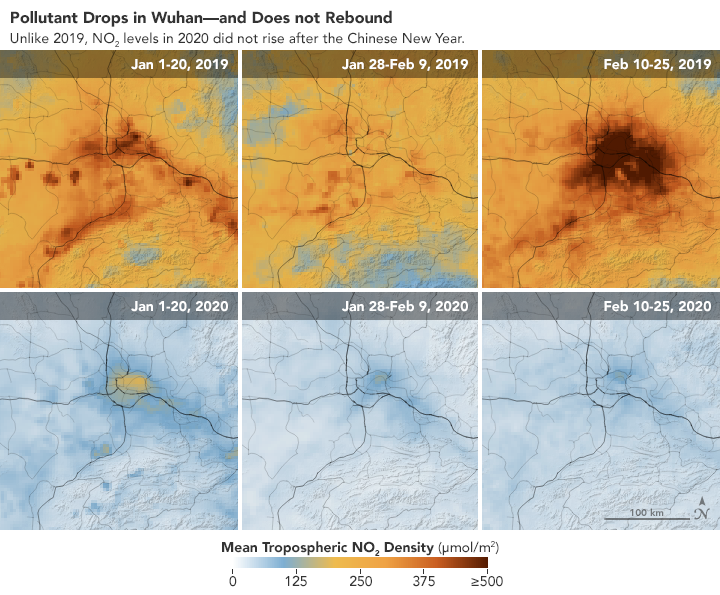 Wuhan, the believed epicenter of the outbreak and a city of 11 million, has been in lockdown since January 23. The lockdown resulted in the suspension of all public transport, including buses, railways, flights and ferry services. Hubei, which shut down the province’s businesses to prevent the spread of the virus, is expected to restart business on March 10.

The province’s capital city is a prominent manufacturing and logistics hub for the automotive industry, hosting “production facilities for seven major domestic and foreign manufacturers,” including Honda Motor, Nissan Motor and General Motors.