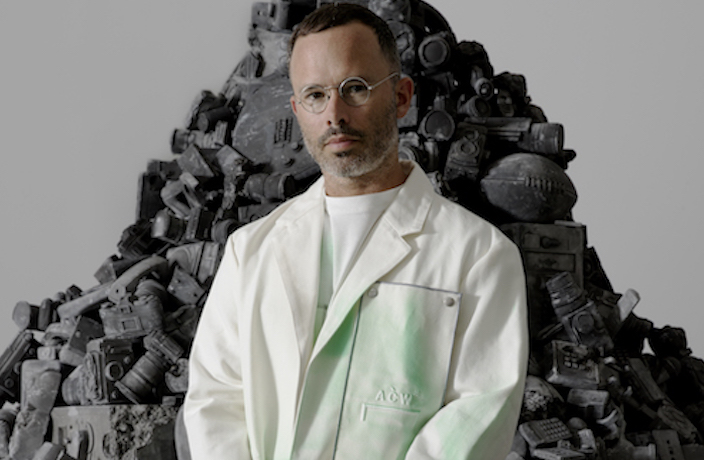 As one of the most culturally influential artists in the Western world at the moment, Daniel Arsham’s fame has spread like wildfire. Earlier this year it was announced that the Florida-born, New York-based artist would team up with Dior to help create products based around his signature sculptural style, which incorporates calcification processes, as well as materials such as volcanic ash, obsidian and other geological materials. His method of taking everyday, mundane objects and calcifying them has established his idea of future archaelogy.

In June, HOW Art Museum opened Arsham’s first-ever solo exhibition on the Chinese mainland, Perpetual Present. The exhibition, made up of recent works, was set up specifically for HOW Art Museum, with almost 100 skilled workers bringing the Arsham’s work to live in Shanghai. The artist also has plans to put on another exhibition at Perrotin, the space that represents him, in Shanghai next year.

We spoke with Arsham about his connection to Asian culture, the ideas behind his use of zany geological materials and the impact that his architectural work has on his exhibitions. 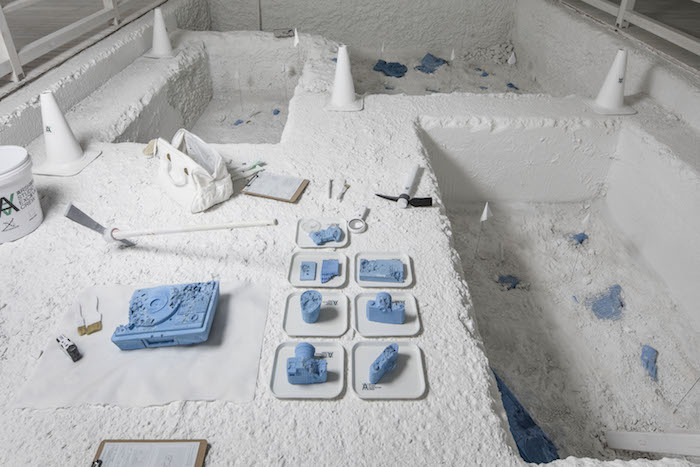 This is your first solo exhibition in China, have you travelled within China before? What is your opinion on the current state of art and the art market in China?
I’ve been in a couple places in China. I was in Beijing about 10 years ago, which was my first experience in mainland China, and Shanghai more recently. I’ve been in Hong Kong a number of items in the past 10 years as I’ve worked with Emmanuel Perrotin and his gallery there. I see a lot of art happening in China, a lot of new museums opening up and also the idea of a museum for art in China is somewhat new and different and interesting in comparison with the way that things are approached in other places in the world. And I think that comparing China to other places in Asia, obviously they’re all different.

I think that one of the things I notice most about working in China is that in much of my work I rely on other tradespeople and crafts in order to execute an exhibition. My show at HOW Art Museum relied on nearly 100 skilled workers to help produce the exhibition. China is one of the places where I can sort of count on things getting done. It’s often a bit crazy in the days before an exhibition, but the skill and commitment of a lot of tradespeople in China is pretty impressive.

So, in regard to this exhibition and to the idea of future archaeology, is there a process whereby you decide what items you feel will be obsolete and what items may stand the test of time?
In terms of deciding on the actual artworks that I wanna cast, I’m looking for things that are recognizable across many different cultures. Things like a basketball, a camera, a vintage computer I know are going to be recognized in the US and in Europe and in China as well. So these kind of items identify less in terms of geography and more in that they’re linked with a particular moment in time. 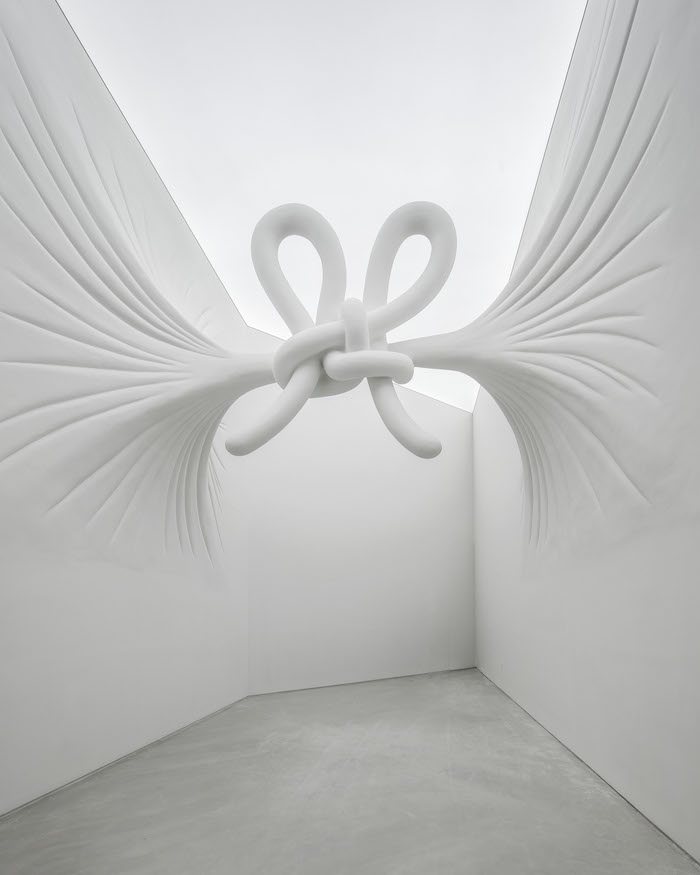 Your use of materials like volcanic ash, rose quartz, obsidian and glacial rock has set you apart. What excites you about the use of these various materials?
The use of the geological materials for me has always been about creating something that has a kind of truth behind it. Let me dive into that a little bit more.

When I’m creating an object to look old, I’m not painting it to look old, I’m actually reframing it in an alchemical way, as if the object has been transformed over millennia. And when we think about materials that are associated with that geological time-frame, crystal volcanic ash, these kinds of elemental materials from the earth are often things that are very relevant to us.

As someone who is heavily involved in architecture, with your collaboration Snarkitecture, can you speak to how much freedom you like to have to transform walls, ceilings, floors or whatever is already present within a particular exhibition space?
In each exhibition I'm looking for ways of guiding somebody through the experience, so you don’t walk into a room and see everything at once. You’re guided. I think that architecture and spatial design has played a big part in a lot of my exhibitions. In some senses the way that you move through a space can be as meaningful as the things that you see inside of it. 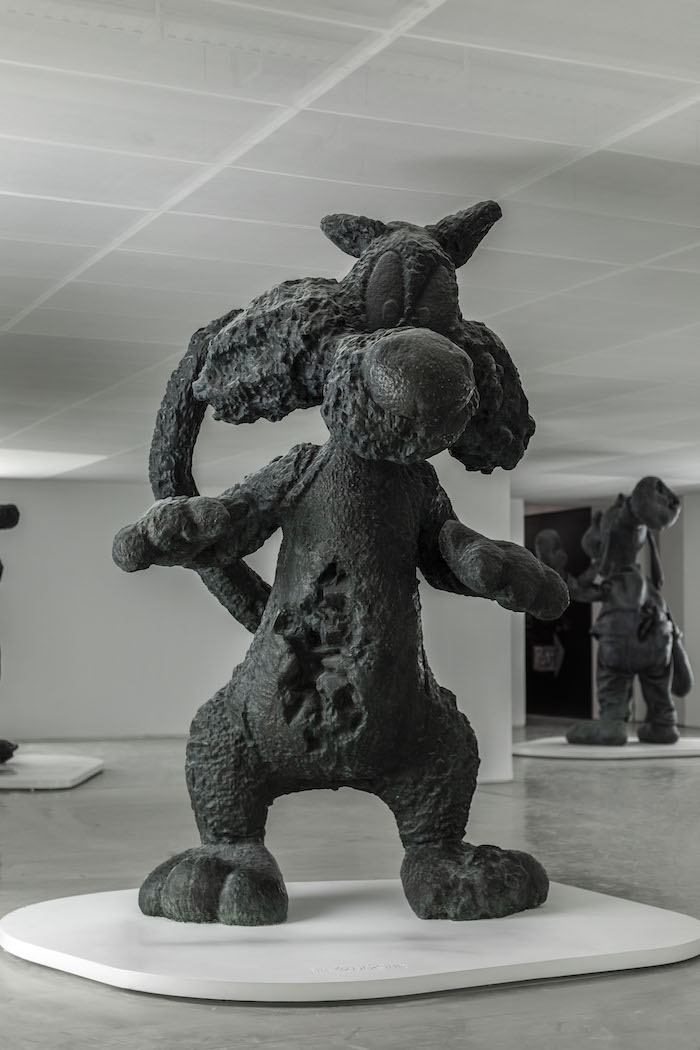 You also brought your calcification to Amsterdam recently as part of a retrospective of your works at Moco Museum, where attendees can see the statement, “Make things you need to see in the world.” Given that your work moves beyond the world as we currently know it and explores possible futures, alternative visions of places that exist in the present and past, is it important for us to ensure that we are guided by imagination as we consider what may come to pass in the coming years?
This idea of making things that you need to see exist in the world for me has always been... I may have a lot of different ideas, as many creators do, but not everything feels as if it needs to exist. I’m trying to create new forms and experiences for my audience and given that we have a limited time on this planet, limited resources for creation of objects i’m trying to refine down the type of things that I make.

In 2017, you re-imagined a Japanese rock garden for Cadillac House in New York. For a project like this that crosses cultures, do you feel you need to ask permission to create this work? What kind of feedback did you get from Japanese observers of that particular work?
I had spent a lot of time in Japan, obviously, my wife is Japanese, and I had been going to Japan for 10 or 15 years and had become fascinated by the rock gardens, the Japanese dry rock gardens such as you can find in Kyoto. I had the idea to transform the materials, such as the sand and rocks and trees. I wanted to make sure my work, when using things that belong to another culture, was respectful. So, certainly I talked to not only my wife, but my friends in Japan. A lot of their sense was that I was taking something that was part of their universe, but recreating it in a new futuristic way. 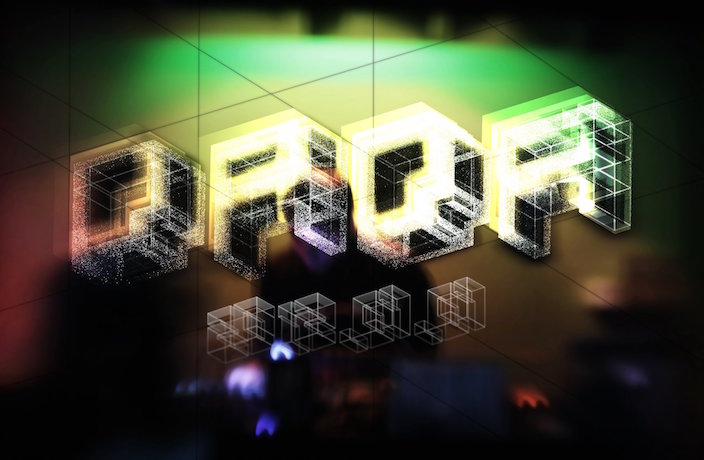 Founder Michael Ohlsson took to Facebook to confirm the news, rumors of which we'd heard over the past few days.