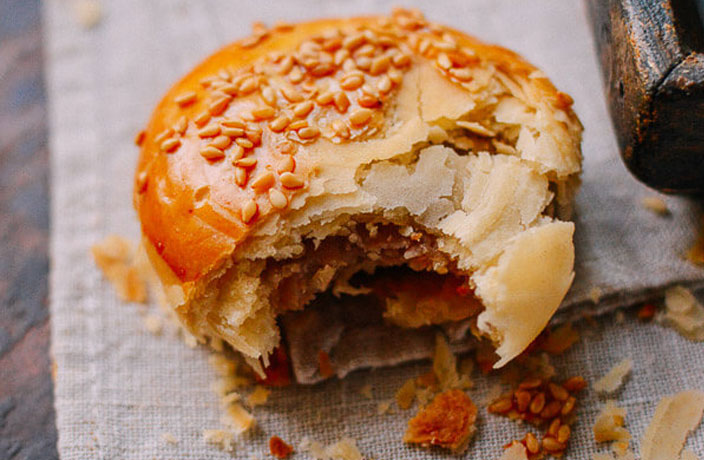 The plant-based meat movement is picking up steam in China. Li Jian, an associate professor of the School of Food and Health at the Beijing Technology and Business University has been developing the “first generation” of artificial meat products with plant-based meat brand Starfield. The company is looking to launch its plant-based meat moon cakes in September, just in time for Mid-Autumn Festival.

Savory moon cakes can be found all across China, and are quite popular in places like Shanghai and Suzhou. You’re probably familiar with the sweet version of these delectable little pastries, filled with lotus seed and salted duck egg. The meat version, however, is noted for its crisp, flaky exterior and savory minced meat filling.

Starfield founder, Wu Yanzi, explained that they currently have a vegetarian restaurant in Shenzhen which is being tested by consumers. Wu stated that their “artificial meat prices are not only cheaper than beef, but also cheaper than pork prices.” The price of their plant-based meat burgers is RMB28, which fares well compared to burgers of the meat variety around Shenzhen.

Of course, another positive that plant-based meat options bring is better nutritional value. Plant-based meat made from vegetable protein such as soybean is close in taste to that of normal meat and contains zero cholesterol. High cholesterol can often be linked to a diet filled with red meat and eggs.

Netizens who weighed in on the new product seemed to be divided into three camps. The first camp did not see any reason for change, “Why do I have to eat artificial meat when meat is available? I personally will not eat it.”

Others focused on issues of regulation, writing “Safety can’t be guaranteed for real meat, what steps are being taken to ensure safety of artificial meat?”

And lastly, those in favor of plant-based meat have chimed in with “If the taste is the same, there is no adverse effect and it can also prevent getting fat, why not buy it?”

Will you be ready to swap your protein source come Mid-Autumn Festival?

China Has Found Something Weird on the Moon’s Far Side

The PRC's Chang'e-4 lunar rover has discovered a strangely colored, "gel-like" material in a small crater on the far side of the moon.

There is now known life elsewhere in our solar system, thanks to the China National Space Administration’s Chang’e-4 moon rover.