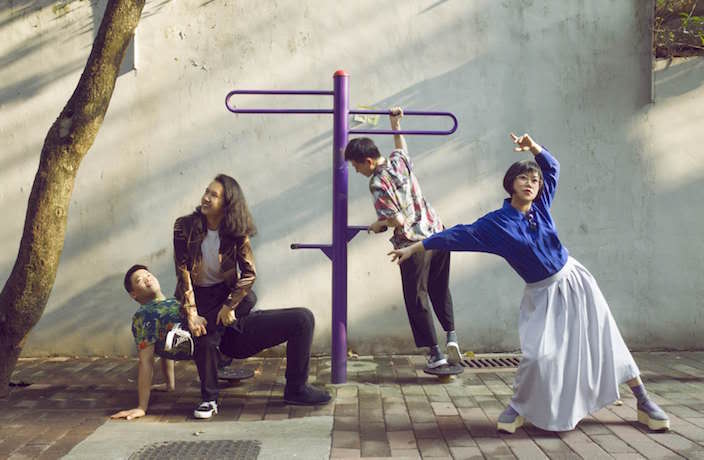 Is it still Tuesday?

If you’re like us and the midweek working grind is getting you down, we have the perfect cure. A pair of our favorite Cantonese indie bands have teamed up for a split lathe-cut 7-inch record on Guangzhou label, Qiii Snacks Records (the label’s 25th release by the way!)

Funk soul brothers and sisters Power Milk kick things off with the bouncy, danceable ‘先返去瞌阵’ (Go Back to Sleep).

While we are hard-pressed to stop our toes tapping a steady beat to this tune beneath our desks as we type this article, according to the band’s singer Gulico, the song’s lyrics revolve around “the suffering of office workers.” Power Milk also accompany this track with a fun cartoon video in which the unfortunate hero can be seen crawling out of bed in the morning, throwing her phone in the toilet and typing at her computer like a maniac.

Another prominent Guangzhou-based indie musician, smellyhoover, closes out the short lathe-cut vinyl with his ‘收工喇喂’ (Get Off Work).

smellyhoover’s effort uses characteristically complex rhythms on guitar, bass and drum. His beautiful layered vocals and manipulation of atmosphere make this a much mellower affair than Power Milk’s track.

While these two acts have wildly different musical styles, we’re told that the long-time friends wanted to work together because the topic of each of their songs is so similar. “We all love vinyl records,” Power Milk’s Gulico says.

The lathe cut vinyl was run on a very, very limited release, with just 30 copies made. Head over to Qiii Snacks Records Bandcamp page to snag yourself a copy before it’s tooooo late!

'Art rock' outfit The Peppercorns speak about music and more prior to their upcoming Beijing show on May 22.