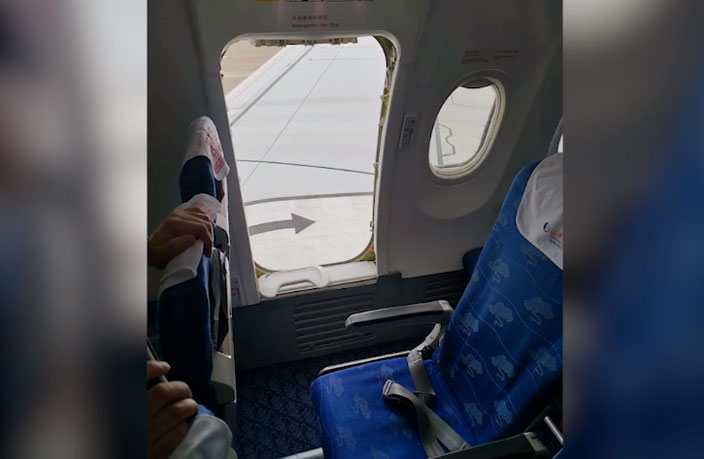 In late April, an elderly man was arrested for opening the emergency exit on a plane after it landed on the tarmac. The incident occurred on a Shandong Airlines flight from Jinan to Zhoushan. The man, surnamed Song, was said to be a first-time flyer, who just so happened to be sitting in the emergency exit row.

According to a video post by the Paper, after seeing a long queue of people preparing to depart the aircraft, the rogue passenger decided to leave of his own accord, busting open the emergency exit door near his seat in an attempt to forgo lining up.

But once Song opened the door, he quickly realized there was no ladder for his descent (surprise, surprise).

Fortunately, the incident didn’t bring about any major damage or delays. Song was promptly taken away by airport security and detained for 10 days for his ignorant stunt. (Given the amount of warnings typically on an emergency exit door, we’re inclined to think Song blatantly disregarded the word ‘emergency’).

Think that’s bad? In 2016, a first-time passenger on a plane from Chongqing to Shenzhen mistook the emergency exit for a bathroom before takeoff. She reportedly told crewmembers that the first lavatory had a long line, and took the emergency exit for a toilet break with a view. An evacuation slide was deployed, delaying the flight for several hours.

READ MORE: Woman Throws 6 Coins at Plane for Good Luck, Gets 10 Days in the Slammer

[Cover image: screengrab via The Paper]