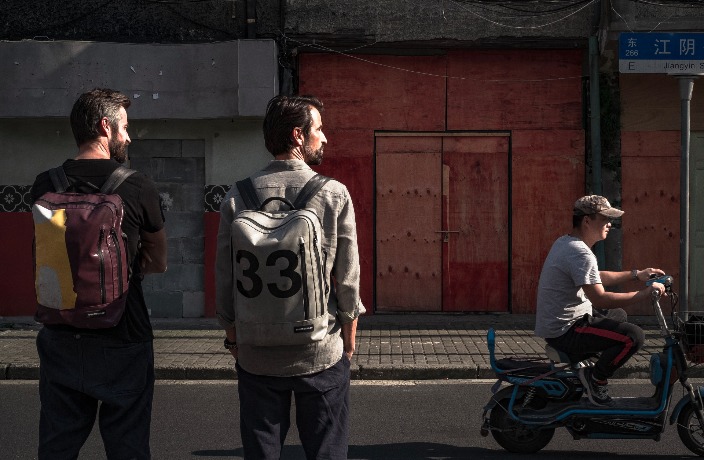 With a devoted fan base around the world, Freitag, a Zurich-based company that has been producing one-of-a-kind messenger bags, backpacks and accessories from old truck tarpaulin, seatbelts and bicycle inner tubes since 1993, is considered by many to be a cult brand. Search for its name or the ‘#frtg’ hashtag on Instagram and you’ll find hundreds of accounts, as well as tens of thousands of posts where fans all over the world show off the latest addition to their colorful and unique collections.

And if Freitag is a cult brand, then founders Markus and Daniel Freitag would be considered cult leaders. Both designers by training, the two brothers created their very first messenger bag out of recycled material some 25 years ago when they needed a water-repellant bag to transport their design drafts while cycling through their hometown’s notorious wet weather.

Today, the brand produces 450,000 bags and accessories a year from their factory in northern Zurich, selling them through their website, 24 Freitag stores in Europe and Asia, as well as hundreds of dealers and partner stores across the globe. 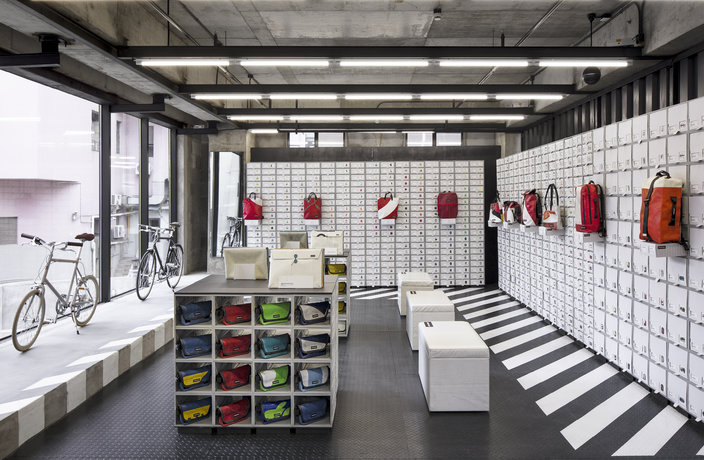 Over a period of 10 days in September, the brothers roamed through Hong Kong, Shenzhen, Beijing and Shanghai to participate in a series of design talks at various universities, bookstores and art museums, in addition to attending the opening of their first store on the Chinese mainland in partnership with local reseller Harbook+ on Julu Lu. During their whirlwind tour, I sat down with Markus and Daniel to discuss their brand philosophy, Freitag’s popularity in Asia, and what it’s like to build a business as brothers.

The official opening party of Freitag Store Shanghai is still a couple of hours away, but a group of diehard fans from Beijing are already patiently waiting in line outside the cordoned off complex. Armed with their favorite Freitag bags and accessories, they’re determined to be the first to see the inside of the brand’s 23rd branded outlet around the world, and to have Markus and Daniel Freitag sign their bags. This is a scene that the brothers are familiar with, as it is something that they’ve done many times at previous store openings, or at brand events in anywhere from Tokyo and Bangkok to New York and Berlin.

Throughout history, design has always reflected the cultural and economic realities in which an idea is conceived. And for Freitag, the ‘terroir’ that gave birth to the bread and butter of the brand was a busy freeway outside the brothers’ window where hoards of colorful trucks pass by on a daily basis. The brothers’ resourcefulness allowed them to become one of the pioneers of upcycling, and many of their loyal fans are initially drawn to the brand because of its sustainable nature.

“In the beginning we just called it recycling, but over the years, we’ve become much better at articulating what we do”

“This is something that has remained the same over the past 25 years, which I think is quite special for a fashion brand,” says Marcus of Freitag’s main offerings. “And no matter if they’re young or old, male or female, or where they’re from, many of our customers all share the same mindset and values of the brand.”

Even with their success and recognition worldwide, the Freitag brothers still remain the company’s creative directors, acting as central figures of the brand’s internal and external storytelling process. “In the beginning we just called it recycling,” Daniel says. “But over the years, we’ve become much better at articulating what we do in a more precise manner – dissecting the issue of sustainability down to finer points with a term that we’ve come to love: ‘recontextualization.’” 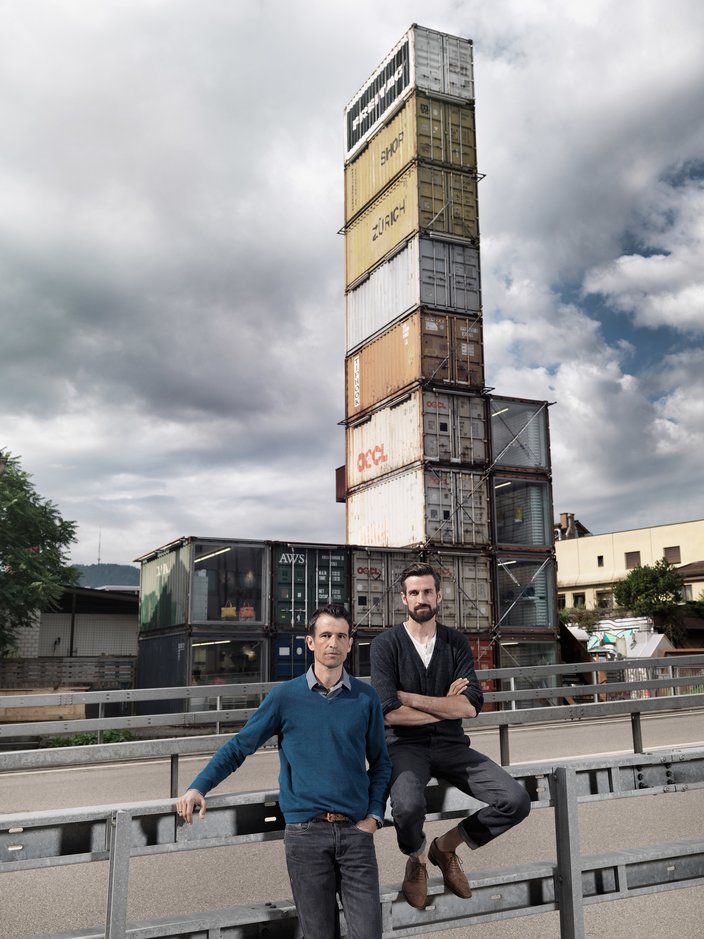 The brothers at the Freitag Flagship Store in Zurich. Image by Oliver Nanzig via Freitag.

It is indeed one of their most frequently used buzzwords in different public speaking engagements and interviews. Recontextualization, or taking something out of its original context and putting it into a new one, makes one stop and raise questions: Why do Freitag bags look so dirty? (Because they’re made with used truck tarps.) Why are there 19 rusty freight containers stacked on top of each other in the center of Zurich? (That’s Freitag’s Flagship Store.) From that point on, a dialogue is established, and the conversion process is initiated.

“You can’t really narrow [our target audience] down to a specific demographic or style,” Daniel tells me. “But we know that Freitag is popular among the ‘creators’ in various fields – music, arts, journalism… This is an advantage for us as they’re good storytellers and love to spread the word out, and the rise of social media has really helped in that regard.”

One example of a devout disciple of Freitag in China is Darou, who is better known as his Instagram handle @freitagstranger. A longtime follower of the brand, the Shanghainese designer and art teacher has been taking snapshots of Freitag bags he sees on the streets of the city since 2015.

“These days, I run into three to seven people wearing Freitag bags in my neighborhood of the former French Concession on a daily basis,” Darou tells me. “But in terms of the hardcore collectors, I think those in Japan and Thailand are much ‘crazier’ than the ones in China. In particular, I think Japanese pop culture has had quite a lot of influence on the brand’s popularity in China.”

From fans who specifically seek out rare all-black items to those who go out of their way to find all products cut out of the same piece of tarp to reconstruct an entire truck, Freitag has established a loyal fan base in the two aforementioned Asian countries since the late 1990s and early 2000s. 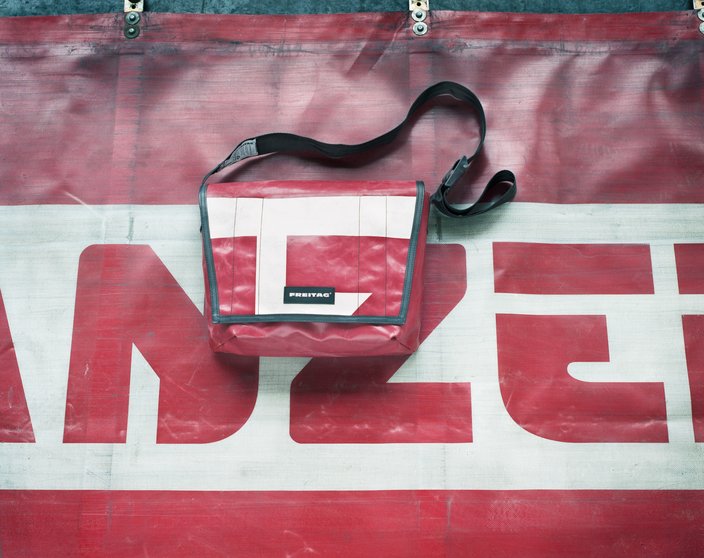 From truck to bag. Image by Noe Flum via Freitag.

In the book Freitag – Out of the Bag, a brand biography published by the Museum fur Gestaltung Zurich, Ken Jungnickel, former director of JykK Japan Inc (Freitag’s local reseller), attributes the brand’s popularity among the Japanese to the society’s preference for collectivism over individualism, a notion that also rings true for other East Asian countries like China.

“The individuality that is part of the philosophy behind the brand also gives customers the chance to be unique and to show it, to be proud of their choice of bag. That’s what makes Freitag so special here,” Jungnickel said to the interviewer.

Besides the desire to rebel against the collective social norm, however, Freitag fans in Asia are actually not all that different from their Western counterparts. “We see Asian male customers prefer smaller bags, something that isn’t very common for Europeans; that’s the most obvious difference,” explains Daniel. “Color-wise, it’s as diverse as other markets. But generally speaking, newer markets go for more colorful bags with interesting patterns or designs, while more mature ones favor more laidback, darker colors and monochromatic designs.”

Working as brothers, according to both Markus and Daniel, comes with its pros and cons. While the duo often can agree quickly on ‘what’ initiatives to take on and ‘why’ they’re doing it, there’s often a debate in ‘how’ to reach these goals. “I think one of the good things about working as brothers is that you can challenge each other in a tough way, but in the end, you know you’re still family,” Marcus says, adding that disagreements between business partners is common regardless if they’re brothers or not.

“Since we’ve been working together for 25 years, and have known each other for our entire lives,” Daniel continues, “we’ve developed a slang where we’re able to communicate with just a few spoken words – that’s both good and bad because we run into the danger of staying in the same pattern, and breaking them is a constant challenge that we have to work on.” 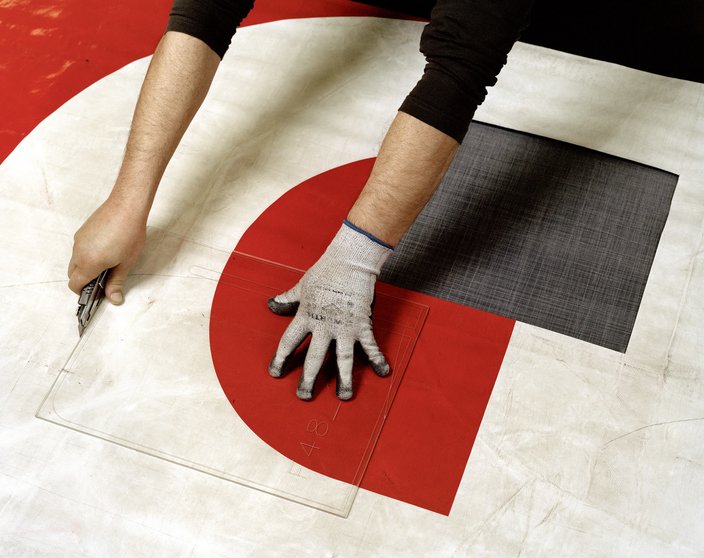 Tarp cutting at the Zurich factory. Image by Joel Tettamanti via Freitag.

While their company has grown from a two-person team to 200 employees since 1993, Markus and Daniel still very much consider Freitag to be a family business. “We’ve been known as a Zurich brand, a Swiss brand and a European brand, but I think it’s time to become a multi-domestic brand. Having established local teams with local colors of the brand in different countries has really enriched our perspective,” says Daniel of Freitag’s growing global presence.

“Living in Europe, China’s portrayal in mainstream media is always related to its politics, its rapidly growing economy and changing society,” he adds. “What’s interesting for us on this trip is to see that the awareness for sustainability is also growing here. Freitag may still be speaking to a niche audience here today, but hopefully this niche will become the future of the market.”