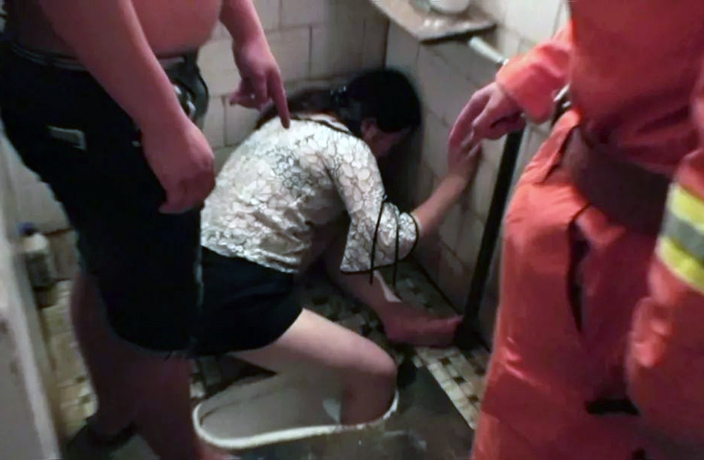 In what can only be described as the crappiest of circumstances, a woman in Yulin, Guangxi province had to be freed by firefighters after she got her leg stuck inside a squat toilet.

According to Daily Mail, the fire department arrived on scene to relieve the distressed woman just six minutes after her family made the call at 3.38am.

She can be seen in the video sobbing heavily, and appears to be quite inebriated as she fumbles with shampoo bottles and slumps against the tiled wall.

The firemen used tools to break up the toilet in order to free the unnamed woman before loading her onto a stretcher – a piece of the faeces-covered toilet drain still wrapped around her leg.

READ MORE: Stomach-Churning Photos Remind People of Wuhan to Stop Dropping Their Phones in the Toilet

The remaining piece was removed en route to the hospital, and she managed to walk away from the incident having sustained only minor injuries (sense of pride notwithstanding).

After publically confirming the dirty details, Yulin Fire Department took the opportunity to caution residents to drink responsibly, adding that personal safety should be a top priority.

You’d be forgiven for assuming that incidents like these are few and far between. On the contrary, in Huizhou alone, at least five incidents of people getting stuck in squat toilets were recorded in 2017, including a woman who attempted to retrieve her phone battery from the toilet drain.