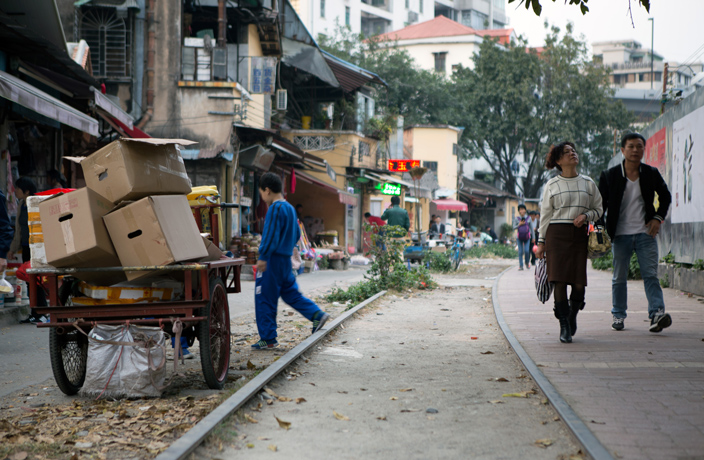 In this major hub of manufacturing and trade, railways have played an integral role in Guangzhou’s development. If you have spent any amount of time living in the city or the region at large, chances are you have ridden at least one train, probably to Hong Kong for a weekend of boozy, unhinged fun and unhindered Internet access.

Canton’s first railway, the Yuehan Railroad, was built in 1900, although it would not go into service until 1936. The route connected Guangzhou to Wuchang, in Hubei province.

The city’s first active rail line, the Guangsan Railway, broke ground in November of 1901 and its construction was led by an American company. The route, which connected Guangzhou to nearby Foshan, went into operation in September of 1903 – roughly eight years before the Canton-Kowloon track linked Guangzhou and Hong Kong by rail. 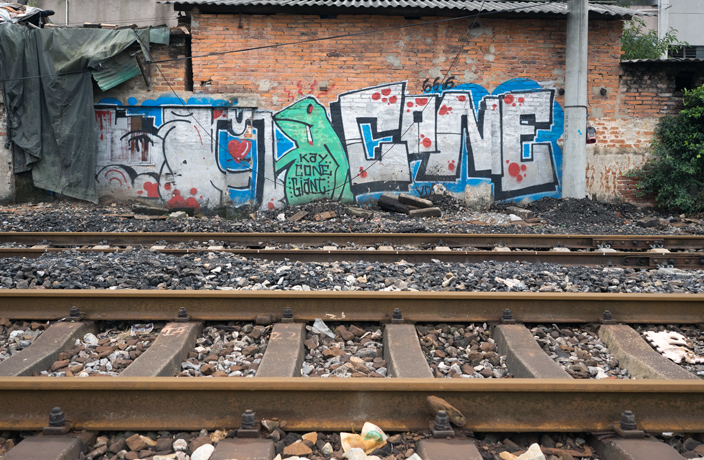 The starting point of the Guangsan Railway in Guangzhou was Shiweitang Station, which was built on the site of a former Fang village on the right bank of the Pearl River, in Guangzhou’s Liwan District.

In the early days, Shiweitang Station only provided passenger transport and did not handle the consignment of cargo. During China's War of Resistance Against Japanese Aggression, workers on the train route demolished one stretch of railroad from Shiweitang Station to Foshan Station, lest the Japanese army make use of it. The track was rebuilt after the war and operated until March 1992, when passenger service was halted.

Today, the metal tracks at Shiweitang Station are covered in an orangey-gold layer of rust. Passengers no longer crowd the station platform and the blaring whistles of departing trains have been replaced with the hum of nearby industry. 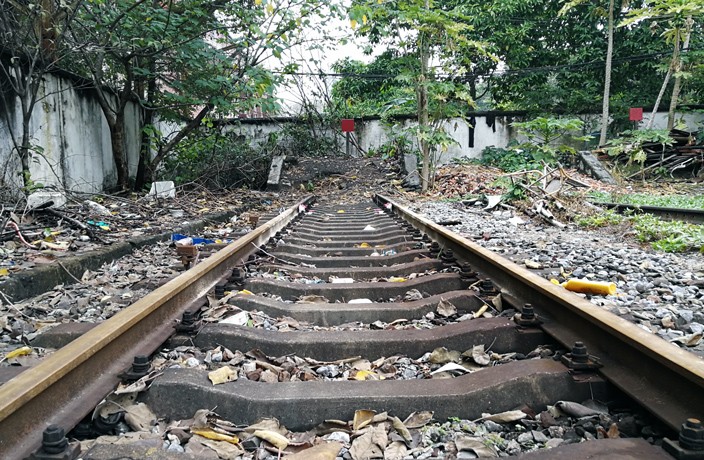 While the station building is no more, the boarding platform and abandoned tracks are still very much intact, albeit weathered. The area has been largely reclaimed by nearby residents and serves as a kind of community garden.

By all accounts, the only folks that are going out of their way to visit Shiweitang Station now are selfie-hunting teens. (Fun fact: the station, after its closure, was regularly used as a filming location for Chinese TV series and movies. This helped the site gain fame with Guangzhou’s amateur photographers). 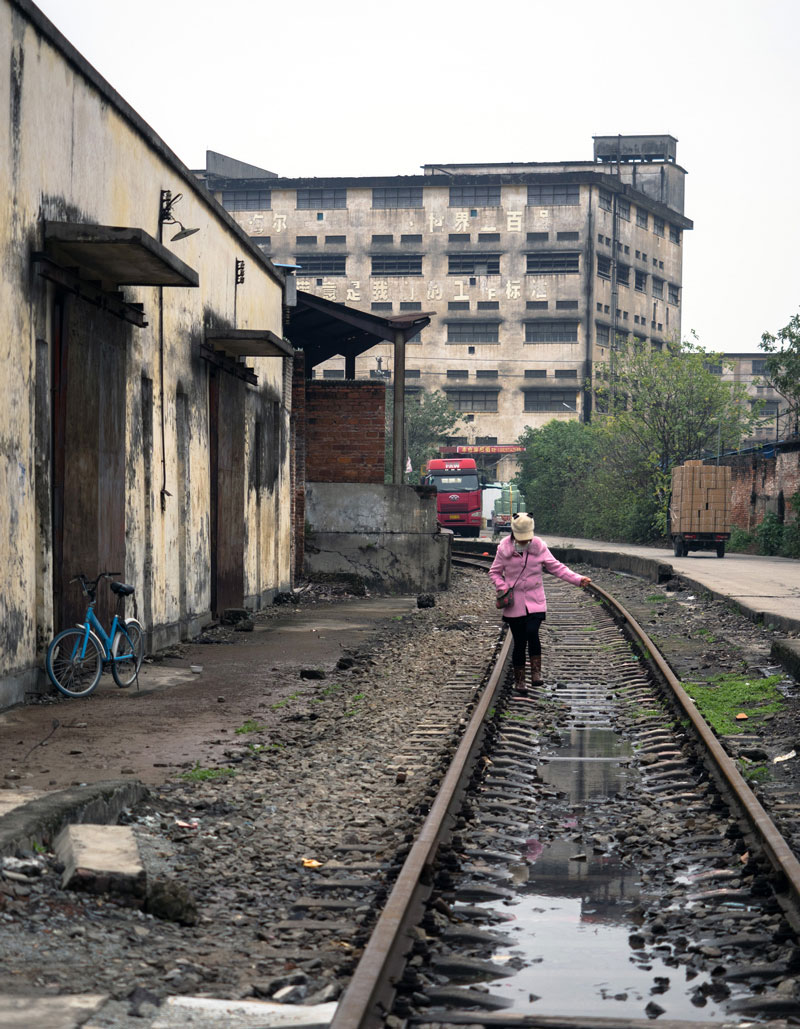 In death, Shiweitang Station has found some semblance of peace, but not all of Guangzhou’s derelict railways have received such a quiet end.

An abandoned stretch of railway near Guangzhou Metro Line 5’s Xichang Station, also in Liwan, has been swallowed up by a vibrant array of clothing and food stalls. The forgotten track, which can be accessed via Huanshi Xilu, came to our attention via a report by Guangzhou Radio and Television, which profiled the area’s upcoming redevelopment — part of the local government’s ‘chengshi man xing xitong’ scheme. (Chengshi man xing xitong roughly translates to ‘slow city system’). 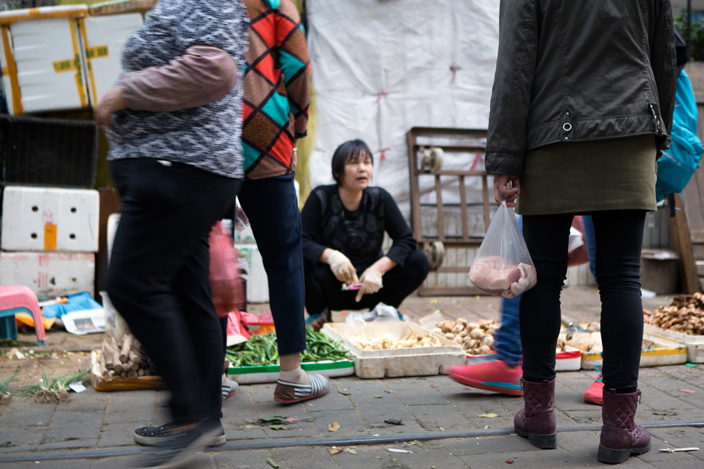 The plan aims to transform a portion of Guangzhou’s abandoned railways into parks and pedestrian lanes, much in the spirit of New York City’s High Line Park. According to Guangzhou Radio and Television, 35 kilometers of unused railway have been earmarked for overhaul during the chengshi man xing xitong project, although specifics on which deserted lines will be included in the development are presently hard to come by. 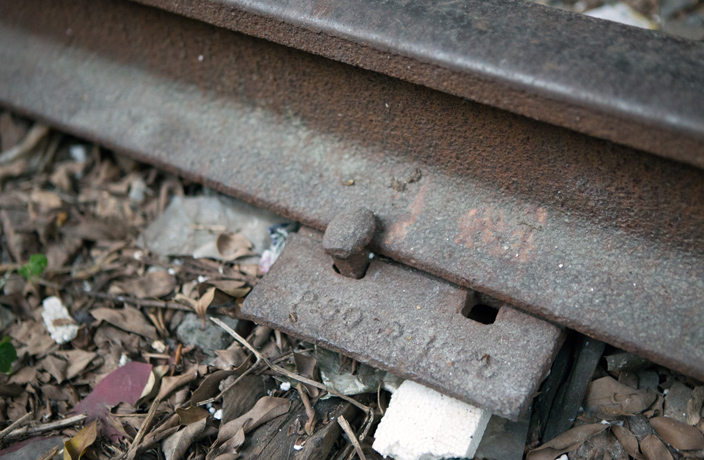 What we do know, from local media reports, is this: the old tracks near Xichang Station, which were originally connected to factories used by Guanghong Food Corporation, will be developed as a demonstration section; the tracks will be retained in some manner; and disused structures near the railway will likely “be transformed into cafes, stadiums and gymnasiums,” aka recreation and entertainment facilities.

"The market has been here for six or seven years. I don’t know if the revitalization measures are a good thing."

A taro saleswoman from Guangxi, surnamed Wu, spoke with us when we visited last month and stated she was aware of the renewal project but that she “had heard nothing about having to leave, just yet.”

“The market has been here for six or seven years,” says Wu, “I don’t know if the revitalization measures are a good thing.”

She adds that once the ‘slow city’ measures begin, she will pack up and leave her hawker post. 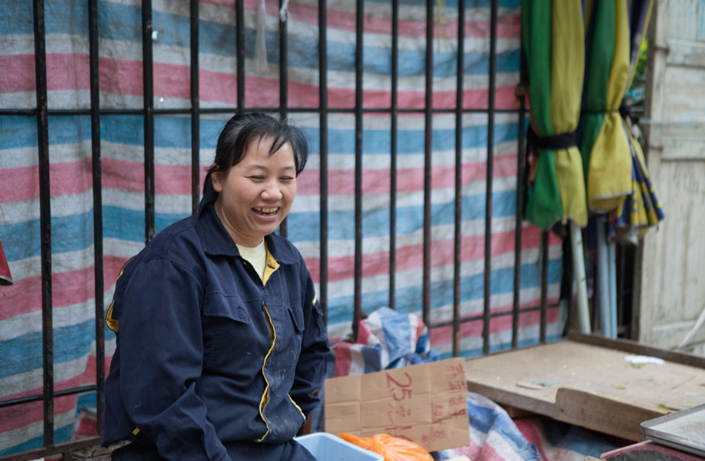 According to Wang Zechu with the city’s Urban Construction Committee, the most urgent job is to improve the city’s ‘slow traffic’ facilities, a task that includes adding more pedestrian walkways and bicycle lanes in residential areas that connect with nearby metro stations, hospitals and schools.

While some may mourn the loss of cheap (and in some cases, free) open-air retail space, the project boasts great potential.

A section of railway originally utilized by the Yingjinqian Canned Food Factory survives in Redtory today and, much like Shiweitang Station’s forsaken tracks, has become a photo hot spot for young urbanites looking to capture a unique shot.