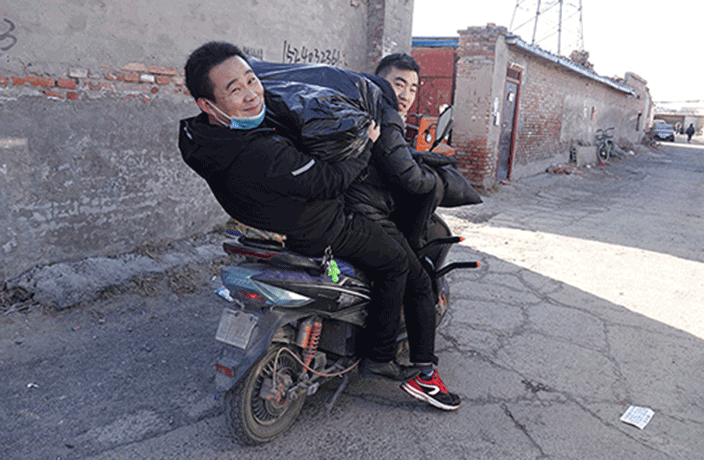 On November 22, an electrical fault caused a fire to tear through a two-story residential building in Daxing district, Beijing, leaving 19 people dead. In the immediate aftermath, the municipal government began a 40-day eviction and demolition campaign, targeting ‘illegal structures’ that were deemed fire hazards.

Villages in Daxing were the first to be razed. Areas in Shunyi, Haidian and Xicheng districts soon followed. Heat maps showed wide swaths of areas being cleared out with tens of thousands of people reportedly left homeless in freezing temperatures – some with only a few days’ notice.

The majority of the evictees appear to be migrants, faced with the option of finding new, more expensive housing or moving back to their rural hometowns. Some residents had lived in the city for decades.

The 40-day eviction campaign coincides with a plan released by the municipal government in September that put a cap on the urban population at 23 million , starting from 2020. According to the Communist Party Chief of Beijing Cai Qi, the cap would be achieved by reducing the size of the inner-city population.

We visited three of the areas affected in early December. Here’s what it was like, in residents’ own words. 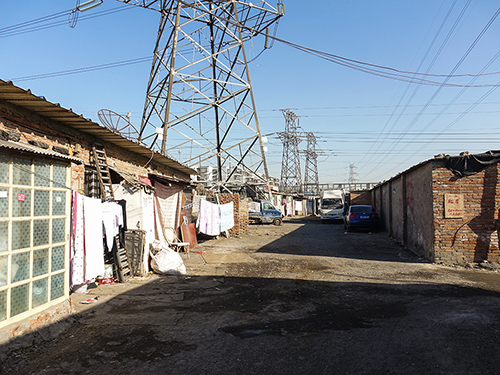 In this urban village, we found the phone numbers of moving companies scrawled on building walls alongside eviction notices. 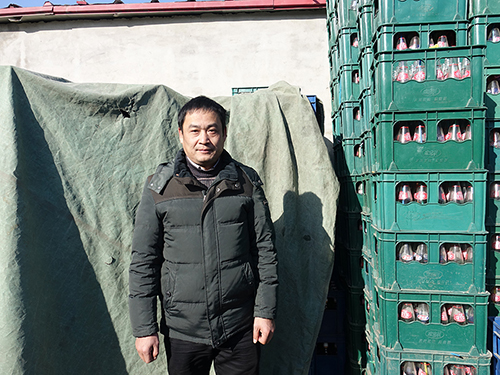 “I’ve been in Beijing since 2006. What can we do? I haven’t gone home because I want to stay in Beijing. It’s just hard finding an apartment. The price is high and sometimes finding work is tough. My wife recently left for Guangdong to find work. She left about 10 days ago. I have a daughter who is back home studying.

I’m a manual laborer and work a few days a week. It’s not easy. We still need to eat and drink. In the past, rent was only a few hundred kuai, but now it’s 2,000 at least.

I’ve already got my things ready for when I move, so that when I find a placeI can move straightaway. I think if you haven’t moved by [December 15] they’d take your things and throw them away, no matter how old you are. All these dogs around here will be left behind and will probably die. 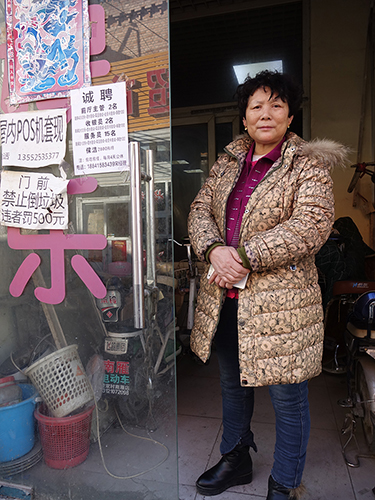 “[My restaurant is] OK here. We don’t have to move because our landlord has the right permits. Of course, if you don’t have these permits then you need to move. My friend just down the street is moving tomorrow. If everybody around here leaves, business will take a downturn. It already has a little. So, in the future, if I really can’t make enough money to afford rent, I’ll move back home too. I’ve been in Beijing for 20 years.”

“The authorities told us on November 21 that we had to move out by December 15. A lot of my neighbors have already found new apartments and moved on. We haven’t found a new place yet because they’re all too expensive. We aren’t sure if this village is going to be demolished after everyone leaves – the authorities haven’t told us. But first, they just want the whole area cleared out. We were given more time to move out [compared to Daxing] because we don’t live close to where the accident occurred. I’m unemployed. Of course, we don’t want to move, but we don't have a choice.” 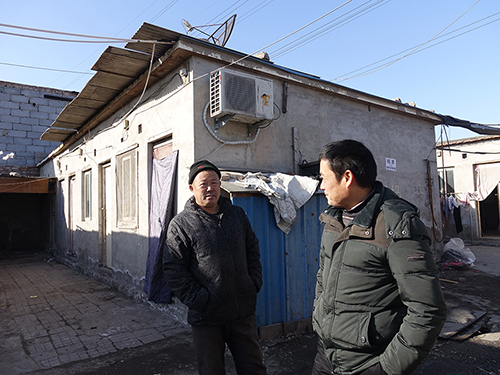 Cao (left) and Liu (right) show us around abandoned homes in Feijiacun.

“People who really have money don’t live here – it’s mainly manual laborers. Who would live here if they had money? And now, where do they go?” 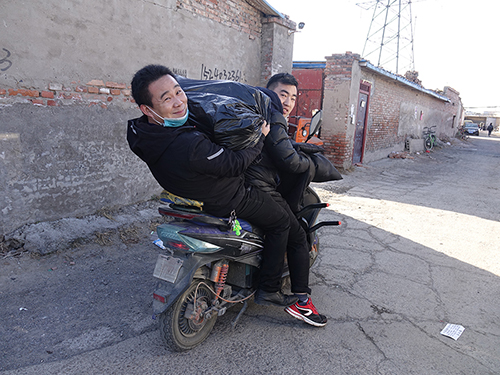 Song (motorcycle rear) prepares to move houses with his belongings in a trash bag.

“I’ve been in Beijing for seven or eight years. Beijing welcomes you and then it doesn’t. I’m 30 and I work at a hospital. Because I have a job in Beijing, I don’t have a choice but to stay here and try to find a new apartment. First I’ll stay at a friend’s place until I can find a suitable home.” 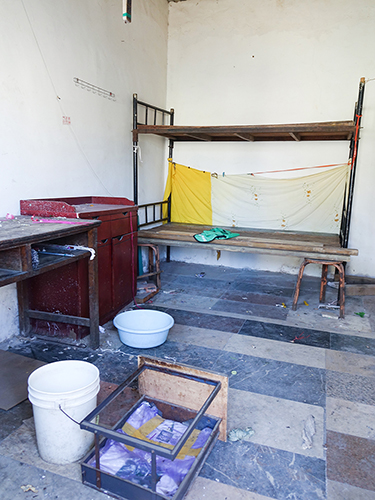 A dwelling in Feijiacun lies abandoned.

“I'm from Beijing, so I'm fine. Our [logistics] company is helping our employees affected by the campaign by providing short-term places to stay. In terms of whether the process authorities followed was appropriate, it depends on how you look at it. Those looking at it from a safety perspective view the authorities' prompt action as necessary. From migrants' perspective, they see it as a wrongdoing. I personally see the authorities as acting correctly. If it's about making places safer, then OK." 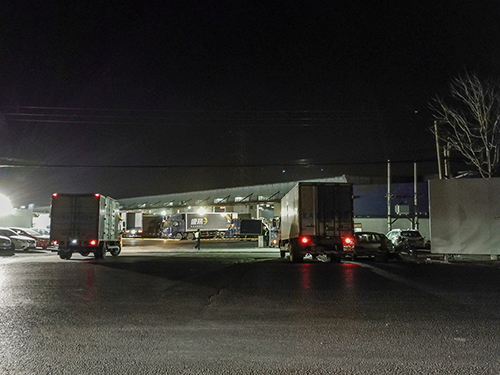 Before the evictions, this industrial area was a bustling logistics hub.

“I’ve lived in Beijing for four years, and I’ve been working in the logistics industry for two. I’m a bit ruffled about the situation. There’s just one capital in China and it needs to have logistics. In the future, the industry will become very specialized and professional, and smaller companies will have more opportunities to grow. We can discover new ways of working. It’s a bad situation now, but we still have hope.”

The local government wants the logistics industry to operate outside the Sixth Ring Road because they’re concerned about pollution from the trucks. Our plan is to find a good place and then move.

The thing is, the authorities have never told us where we can move to exactly. They’ve never told the logistics industry where we can do our business. It seems they just don’t want logistics in Beijing and don’t care how impractical this is. Like, they think Beijing is already a very rich city. They want Beijing people to be able to buy a bottle of water for 50 kuai in the future.

Logistics includes essential services like kuaidi, but the authorities don’t seem to have considered that. Kuaidi will go from being a cheap service to a really expensive one. It also affects our customers because they need to move their warehouses, which are full of their goods.” 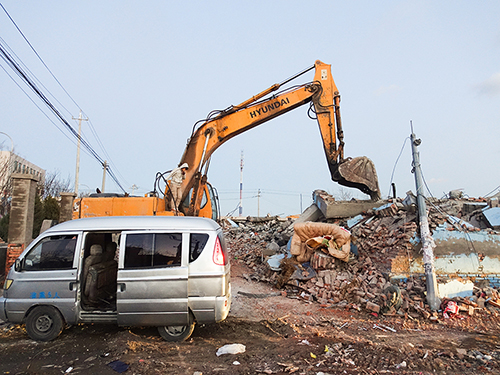 On the day of our visit, the village where the deadly fire occurred looked like a veritable disaster zone.

“You’re too late – the migrants have already gone home. They left late at night on the 24th. They have nowhere else to live so what else could they do? Their houses were demolished. It’s not the local government that made them leave but the residents themselves who chose to leave. If I hadn’t stayed to give you a [taxi] ride back to the city, you wouldn’t have been able to get back by yourselves. It’s in the middle of nowhere. Before the fire happened, who’d even heard of Xinjiancun?”

“This is where people lived – the fire happened just over there. You can't enter now though. It’s shut off so you won’t be able to see anything. We demolished the village after the fire, but didn’t see the residents leave because they’d already gone – the first day after the fire, they were made to leave.”