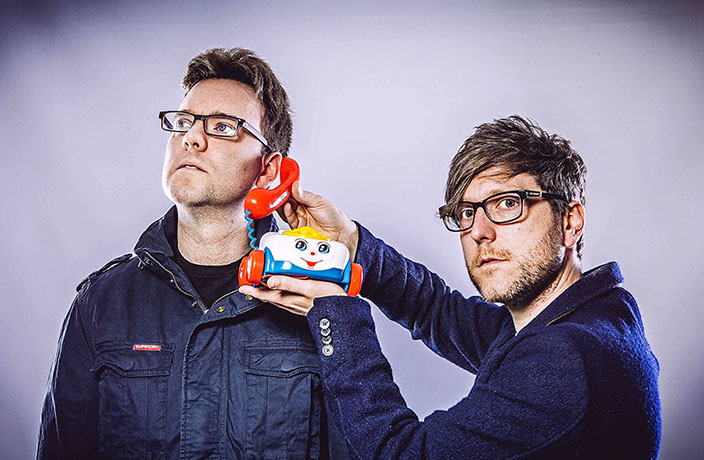 The Candle Thieves, a UK-based duo comprised of songwriters Scott McEwan and The Glock (seriously, that’s what he goes by), make sunny pop that belies darker, contemplative lyrics about life and its foibles. We caught up with The Glock ahead of The Candle Thieves’ extensive China tour.

What is the story behind your band’s name?
I used to play piano at wedding receptions. Toward the end of the night, there would always be half-burned candles lying around. I’d sneak one or two into my bag each week when it was time to go. This went on for a while. One day, [my bandmate] Scott came to my house and asked why there were 50 candles in my lounge… It was a fair question. I said, “Oh yeah, I’m a bit of a candle thief.”

What’s the inspiration behind your new album, Details?
I lost my father last year. A lot of the songs are about how we choose to live our lives in the world, trying to keep our minds safe when things get hard, and letting go. We also had very little money when we started Details, so the whole album was made in four days. We found this time constraint exciting, as it gave the record some urgency. Most of the recording was made live and in one take. We had to plan, practice and work hard.

What songs from Details are most meaningful to you?
‘Carry On, Farewell’ is the most meaningful, as it's the closest thing I had to saying goodbye to my father. It’s just saying that you don’t have to forget, but it’s OK to move on.

Could you tell us about your song ‘China on My Mind’? Is it based on your past experiences touring here?
Absolutely! But it’s more than that, too. We agreed not to make any more music after our third album. Shortly after, we were invited to perform in China. We had such an amazing time that we couldn’t give up on the band. China is the reason The Candle Thieves still exist.

Your music is known for being winsome, yet with darker undertones. Which musicians influence you the most?
Yes, we do write about some dark things, but life is about all the different shades of color. However tough things get, there is always a light. We have lots of inspirations. In the early days we used to love a band called Eels. The singer had a hard life, but managed to write about it in a positive way. We also love The Beatles and classic pop music. These days, we’re largely inspired by the things we see. The world is in a very weird place.

You have performed in unusual locations – in a fan’s kitchen, on a boat and in someone’s back garden. What’s the oddest situation you’ve found yourselves in?
[Laughs.] Yes, we have performed in some strange settings. The weirdest was probably a ‘Wild West’ cowboy-themed party. Everybody had their shirts off and was dancing around. That was interesting. The wildest experience was probably coming to China for the first time. We had no idea what to expect. But to travel the other side of the world to people that care about us was amazing, and something we’re incredibly grateful for.