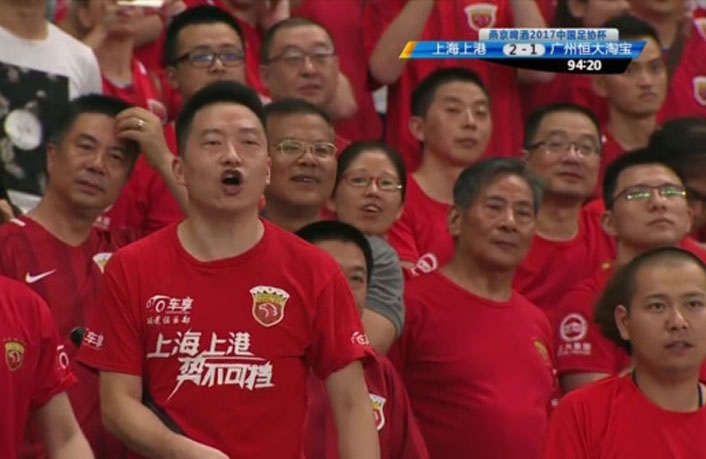 On August 16, the Chinese FA Cup semi-final match between Shanghai SIPG and Guangzhou Evergrande was held at Shanghai Stadium. At the end of 90 minutes, Shanghai emerged victorious, defeating Guangzhou by a score of 2-1 – the club’s first-ever win against Evergrande.

Although most of Evergrande’s key players from last year were absent on the field, it was considered a historic moment for SIPG. Unfortunately, it wasn’t the club’s win but the unruly behavior of its manic fans that ended up in the media spotlight.

During the match, fans in SIPG jerseys were filmed singing Queen’s stadium anthem ‘We Will Rock You,’ albeit with a minor change, instead chanting “We will, we will f**k you.”

Evergrande fans mocked their classy display on social media, with one commenting: “The English level in this international metropolis is rather high.”

Watch the spectacle below (VPN off):

After the match, the two parties were seen swearing at each other outside of the stadium, although, thanks to security staff, the banter didn’t develop into a physical conflict.

The bitter rivals meet again on Tuesday night at Shanghai Stadium in the AFC Champions League quarter final, in what is sure to be a civil encounter. Kick off for that is at 8pm. The second leg of the FA Cup semi final is on September 30 at 7.35pm, in Guangzhou Evergrande's Tianhe Stadium