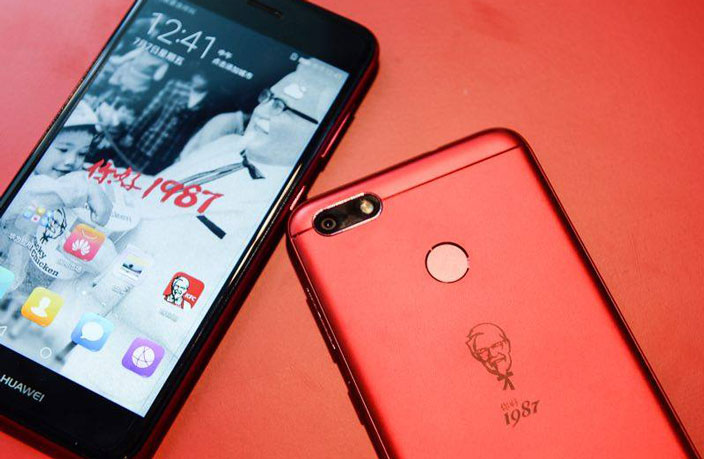 For those of you who just can’t get enough of the Colonel, KFC and Huawei have partnered up to release what we assume is the first-ever fried chicken inspired phone: the Huawei 7 Plus – KFC edition.

That’s right, KFC fanatics can now own a sleek red Huawei 7 Plus, adorned with the face of Sanders himself on the back.

According to CNBC, the new phone will be limited to a release of 5,000 units. Each phone will retail for RMB1,099, and will be available for purchase July 13 on Tmall.

The joint venture comes as KFC and Huawei both celebrate 30 years of business in China.

KFC has consistently been the undisputed champion of fast food in the Middle Kingdom. They were the first brand from the West to set up shop in the country, and they hold a larger share in the market than fast food powerhouse McDonalds, according to Branding In Asia.

As an added bonus, the phone will come preinstalled with the KFC app, along with 'K-music,' a new jukebox feature that allows customers to personally select the tunes that play while eating in any KFC restaurant throughout the country.

KFC recently caught our attention with the announcement of a new 'healthy restaurant' in Hangzhou. But for diehard fans of the finger-lickin’-good chicken, we'll bet even a tacky phone is more appealing than dining at a health-conscious establishment.