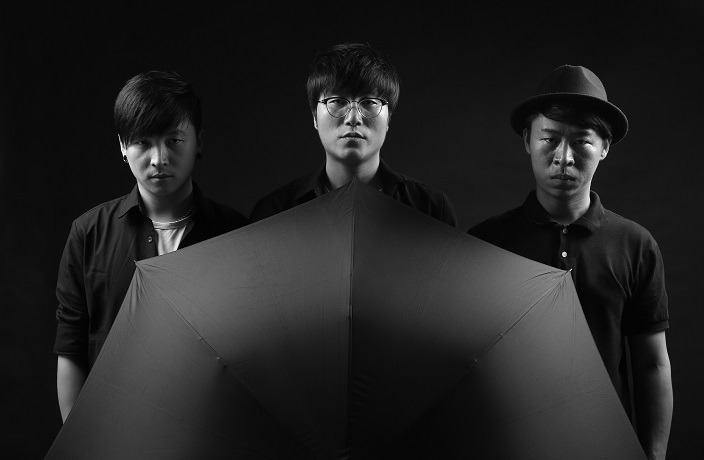 Over two albums of menacing post punk, The Fallacy has established themselves as one of the standouts in China’s next generation of indie acts. However, on their latest disc, Above the Neck, Below the Bridge, they’ve expanded their terrorizing sound.

“This album was recorded in different ways,” says frontman and guitarist Wang Xubo. “Compared to our first two albums, it sounds cleaner and clearer. There’s more of an emphasis on rhythm.”

Formed in 2008 in the Henan suburb of Xinxiang, The Fallacy has racked up some impressive bonafides. Discovered during a Modern Sky organized House Party - a concert series of unsigned indie bands across China – the group has since become one of the label’s young stalwarts.

Early mentor, P.K. 14 frontman Yang Haisong, produced the group’s first two discs. However, if the trio’s past work were defined by its harsh guitar riffs and post-punk rhythms, Above the Neck, Below the Bridge is full of collaborations that has opened new sonic avenues for them to explore.

“Li Jian from The Big Wave played synthesizer on some songs, so there’s a little new wave component. On others, the Beijing experimental saxophonist Wang Ziheng joined us and it sounds very no wave,” says Wang.

“It was also produced by Chen Cheng who did the last album from (rockabilly trio) Rolling Bowling.”

Despite tinkering with their sound, Above the Neck, Below the Bridge retains the core elements that have made The Fallacy so acclaimed. Songs like ‘Uneasiness’ rides on the interplay of its aggressive bassline and its unhinged guitar, while opener ‘Hush-A-Bye’ is filled with Wang’s urgent vocals and the trio’s dramatic dynamic shifts. However, others like ‘Lights of Xinxiang’ with its squalling sax hint at the band’s bright future.

Wang credits the group’s willingness to experiment with their sound to their 2014 national tour, which took them across 21 cities. He laughs at memories of “drinking too much and nearly missing trains,” but also says The Fallacy’s first tour was very educational for the group.

“The stage experience gave us a higher degree of understanding of our music,” he says. “It was a great help in creating this album.”

He’s eager to return to the road. The Fallacy’s 25-city national tour to support the album stops off in Shanghai (Mar 24 @ Yuyintang), Shenzhen (Apr 1 @ B10) and Guangzhou (Apr 2 @ T:Union). Wang beams with excitement of performing in cities like Wuxi, Quanzhou, Chongqing and Ji’nan for the first time.

Despite their ascending status, the group continues to resist the pull of big cities like Beijing and Shanghai. Wang praises life in Xinxiang noting “there’s an advantage to life in small cities as there’s less pressure on life. It’s given us more time to devote to creating music.”

While Above the Neck, Below the Bridge was just released last month and their national tour will continue into late April, Wang is already thinking about The Fallacy’s next move.

“We’re going to do some music festivals and start preparing for our fourth album.”