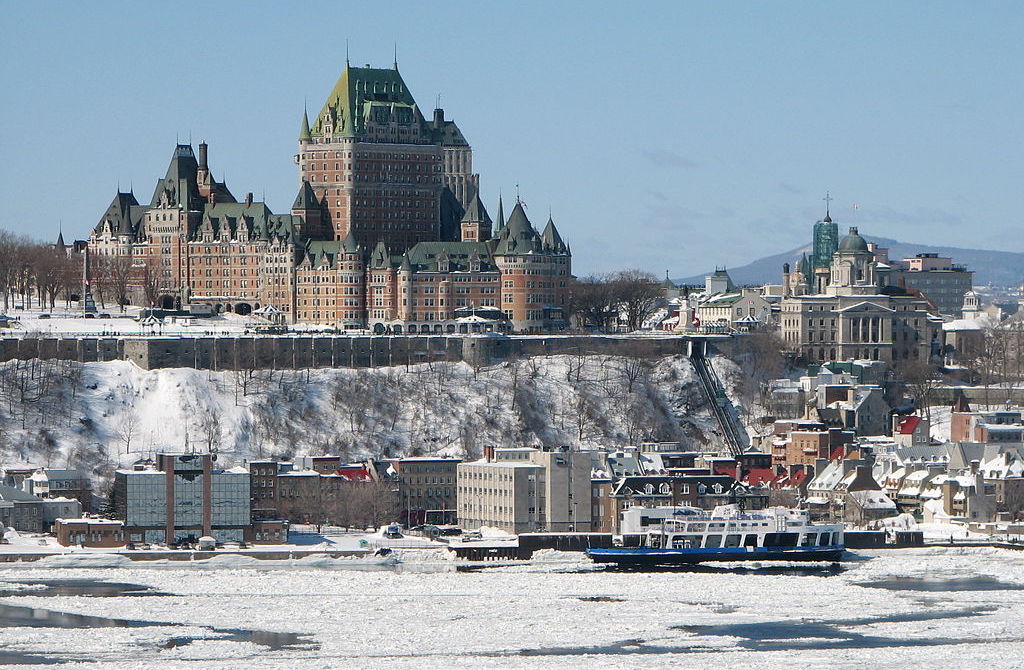 Two weeks before Christmas Day, I emerge from the airport into freezing -10-degree Celsius weather. There was a snowstorm earlier today, and another one the day before. Everything is shrouded in a thick layer of soft, white powder.

It’s unusually cold in Quebec for this time of year, I’m told. During my visit, the temperature will drop as low as negative 25, then inch up to a bearable five below zero. Equipped in heavy winter gear, we explore Quebec City in fits and spurts. We walk past rows of small shops on rue Saint Jean until the cold is almost unbearable, then dart inside the nearest cafe or gourmet food store for refuge. The warmth kindles first in fingertips and noses, gradually enveloping us until we’re toasty all over. We take our time arranging scarves and hoods and gloves before plunging outside again.

As we make our erratic way along the street, we also get a feel for this neighborhood bordering the historic quarter of Old Quebec. One thing’s for sure: it’s eclectic. One place specializes in imported European foods, while another one has the feel of an old-timey general store. At least two stores on the street sell clothes made from alpaca wool. The daily influx of foreign tourists and local youth in this part of town seems to sustain a whole economy of niche products.

One of the highlights of our stops is Erico, a small chocolate store that doubles as a museum. One half of the small space is dedicated to educating the public on the art and history of the sweet treat, while the other half serves up the thickest, creamiest mug of hot chocolate I’ve ever tasted. 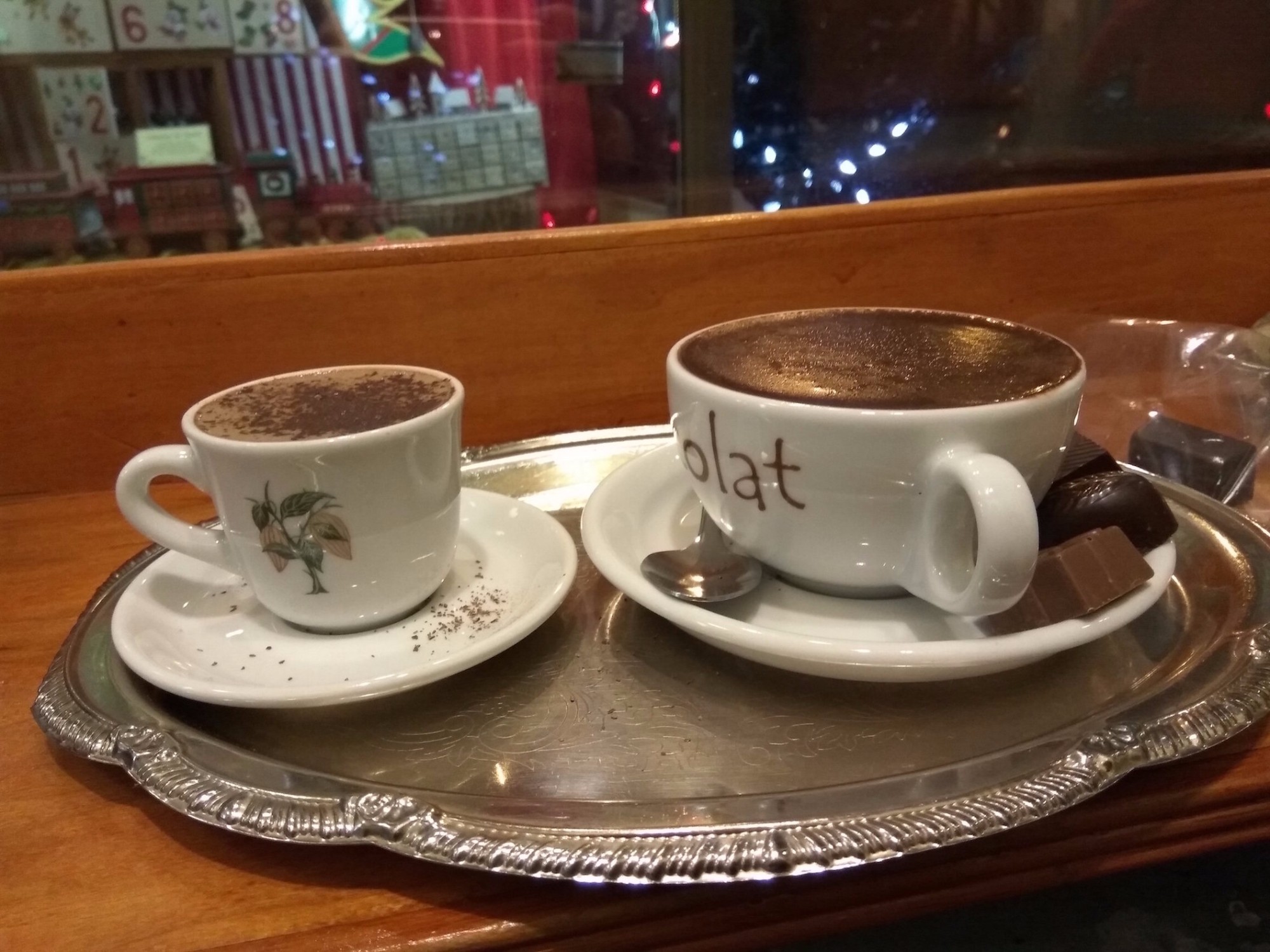 Like many shops here, service is offered in both French and English. The displays in the small museum have descriptions in both languages, and the staff member behind the counter readily offers me an English menu when asked. Quebec, after all, is largely bilingual; although not everyone is fluent in English, most understand the basics of the language.

It’s a reflection of the Canadian province’s unique position, culturally speaking. It’s a bastion of native French speakers surrounded by Anglophone territory on all sides. The inhabitants of Quebec learn English out of necessity, but most are raised speaking the province’s own particular patois, passed down from early French colonizers who arrived on the continent several centuries ago.

With the British takeover in 1763 and subsequent waves of international immigration, cultural adjustment was inevitable. But despite the odds, Quebecers have managed to hang on to a distinct language and culture throughout the centuries, drawing strength from their own tenacity. As their license plate motto declares, “Je me souviens.” I remember.

Even within Quebec Province, whose towns are littered with old trading ports and historic architecture, Quebec City carries a special cultural cachet. It was here that the explorer Samuel Champlain laid the first foundations for the colony of New France. On the grounds of Quebec City’s Plains of Abraham, the British won a brief, pivotal battle that helped them take control over the whole French possession. 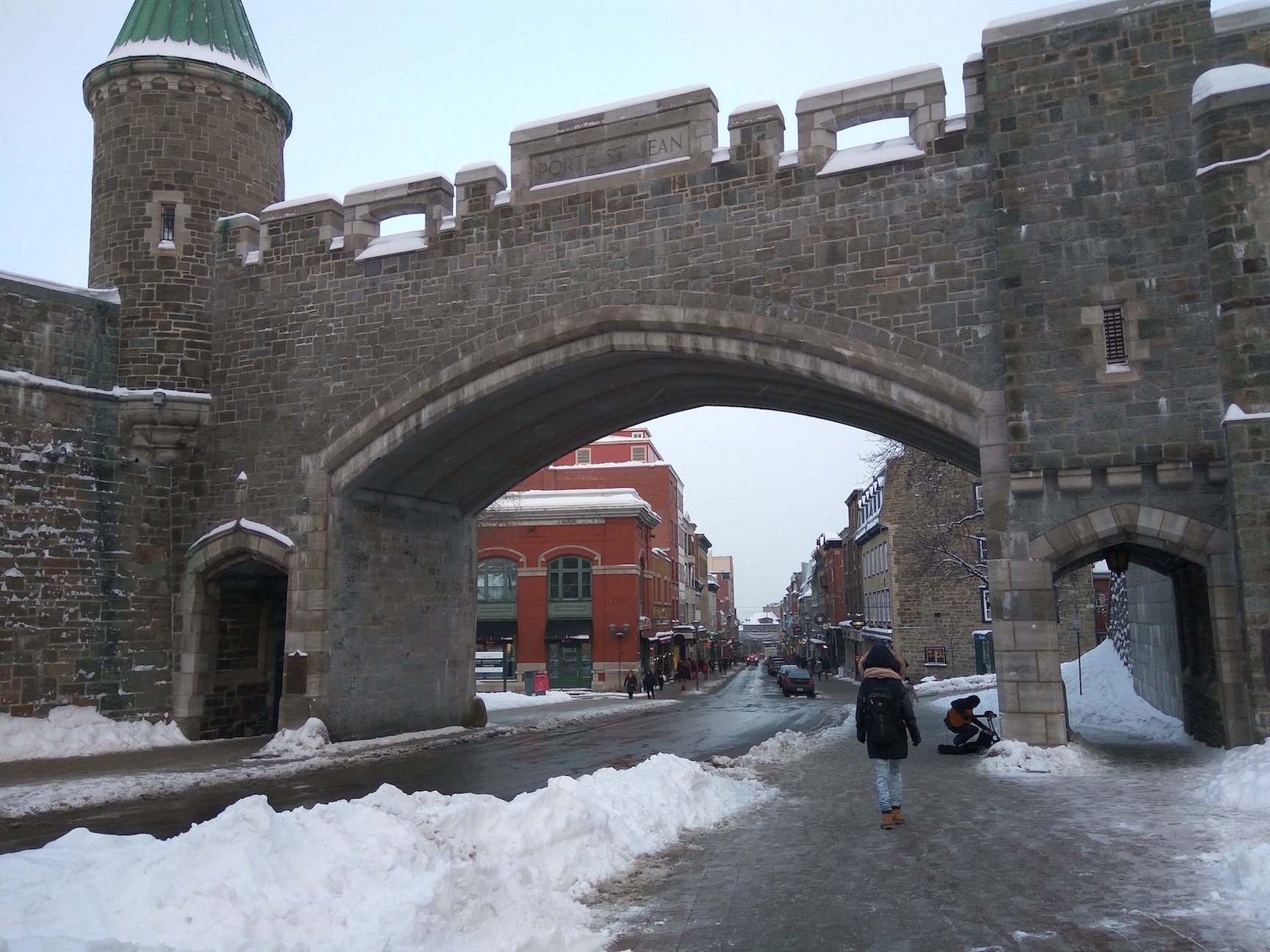 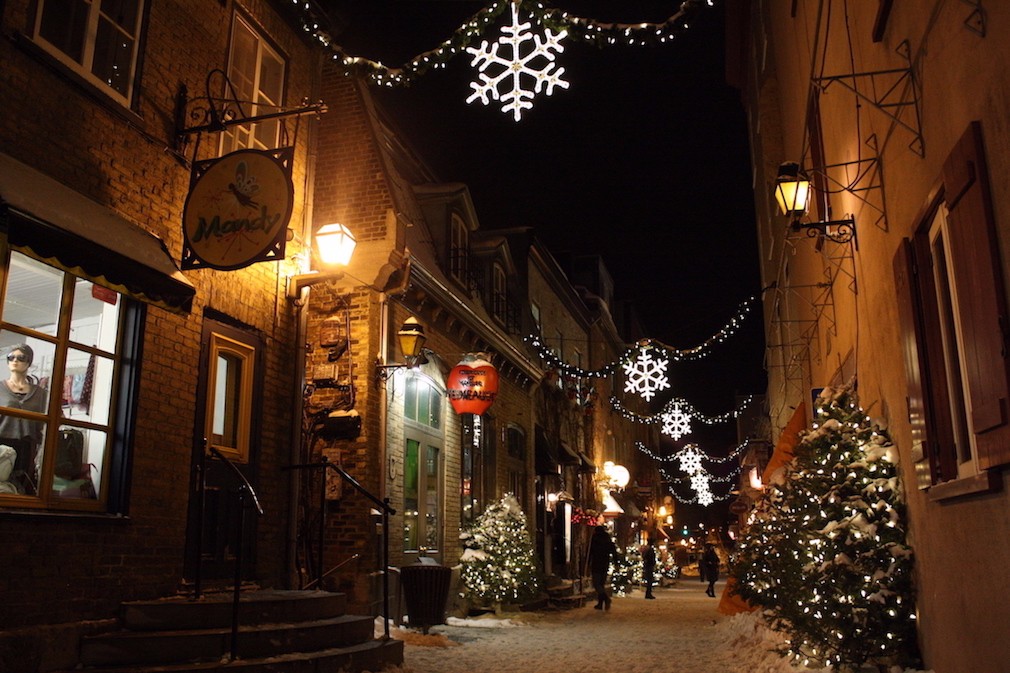 Visitors interested in local history can learn these facts and more with a visit to the local Musée de la civilisation, which offers an informative if dated exhibit entitled Quebec People…Then and Now. Conveniently, the museum is located within walking distance of some other similarly educational options.

Le Monastère des Augustines, for example, houses a museum with beautifully curated displays on the lives of the nuns who have lived there for almost four centuries. The Morrin Centre, by contrast, is home to a well-preserved 1800s prison in addition to a historic English-language library, the city’s only one.

There’s also the city’s landmark art museum, the Musée National des Beaux-Arts du Québec, which offers representative exhibitions on local artists as well as an interesting glimpse into a less visible culture within Canada. The Brosseau Inuit Art collection features about 100 sculptures of various styles, sizes, and materials. They range from tiny ivory miniatures of seal hunters to a hefty whale vertebrae covered in carven faces, both animal and human. 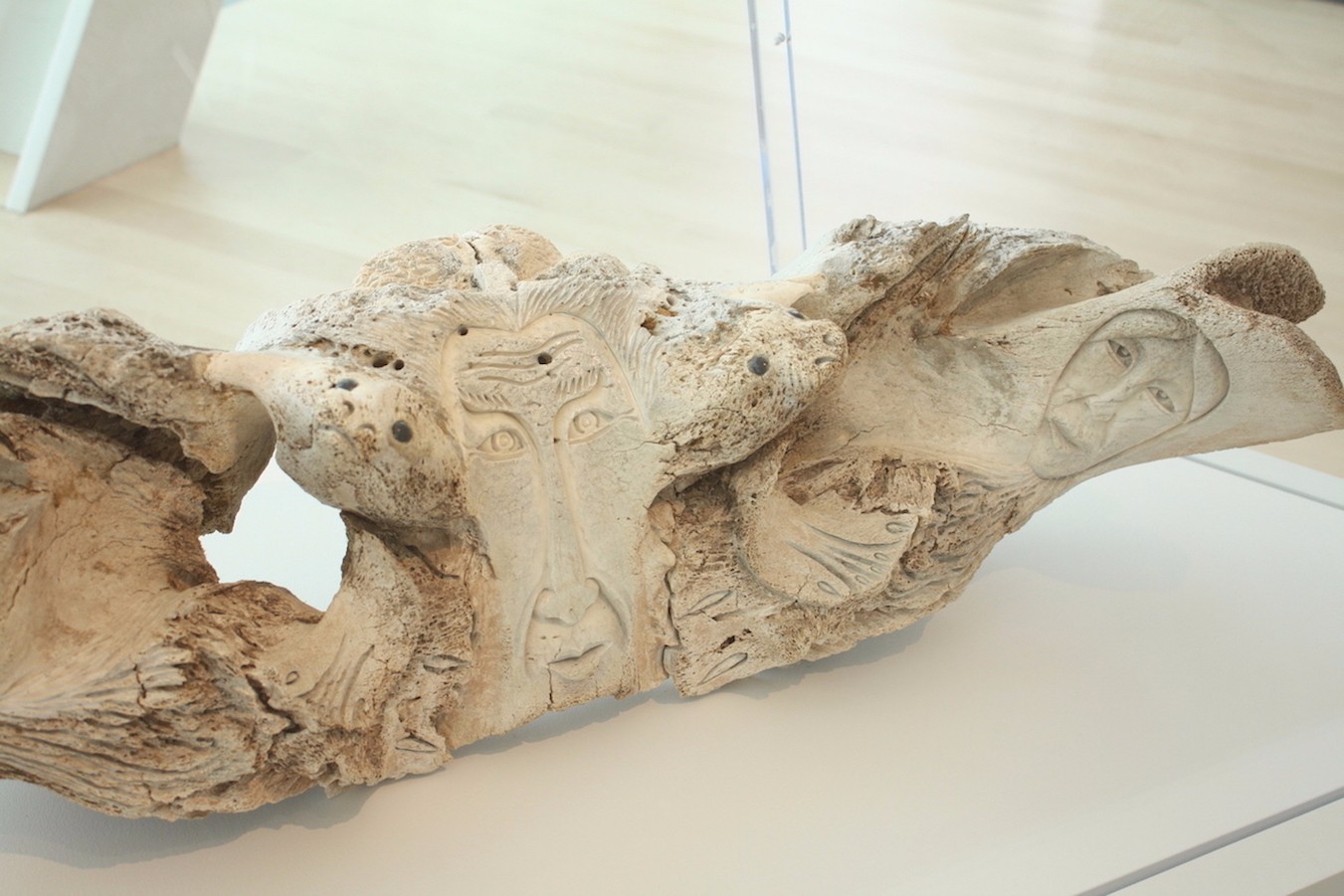 On an especially blustery day, it’s tempting to browse the galleries for hours. More adventurous visitors can also try trekking or skiing around the snow-covered park that surrounds the museum, or skating on the nearby outdoor rink.

For a change of pace, they can also make a trip up the steep stairs of Old Quebec to the city’s most iconic hotel, the Chateau Frontenac. It may not be the flashiest establishment around, but with its pedigree, it doesn’t have to be: over the last century it’s seen visits from royalty as well as historical heavyweights like Chiang Kai-Shek and Churchill.

Around the chateau, overpriced boutiques and other attractions may give the area the look of a well-designed tourist trap, but that doesn’t mean it can’t be fun.

On the day we visit, we join the group of people lining up to ride the long slide on the Dufferin Terrace, which overlooks a broad expanse of the St. Lawrence River. It’s a breathtaking view, and a thrilling ride. As we speed down the icy chute on our narrow toboggan, the Chinese couple to the left of us is busy snapping selfies, a testament to their camera skills as well as the international crowd this area attracts. 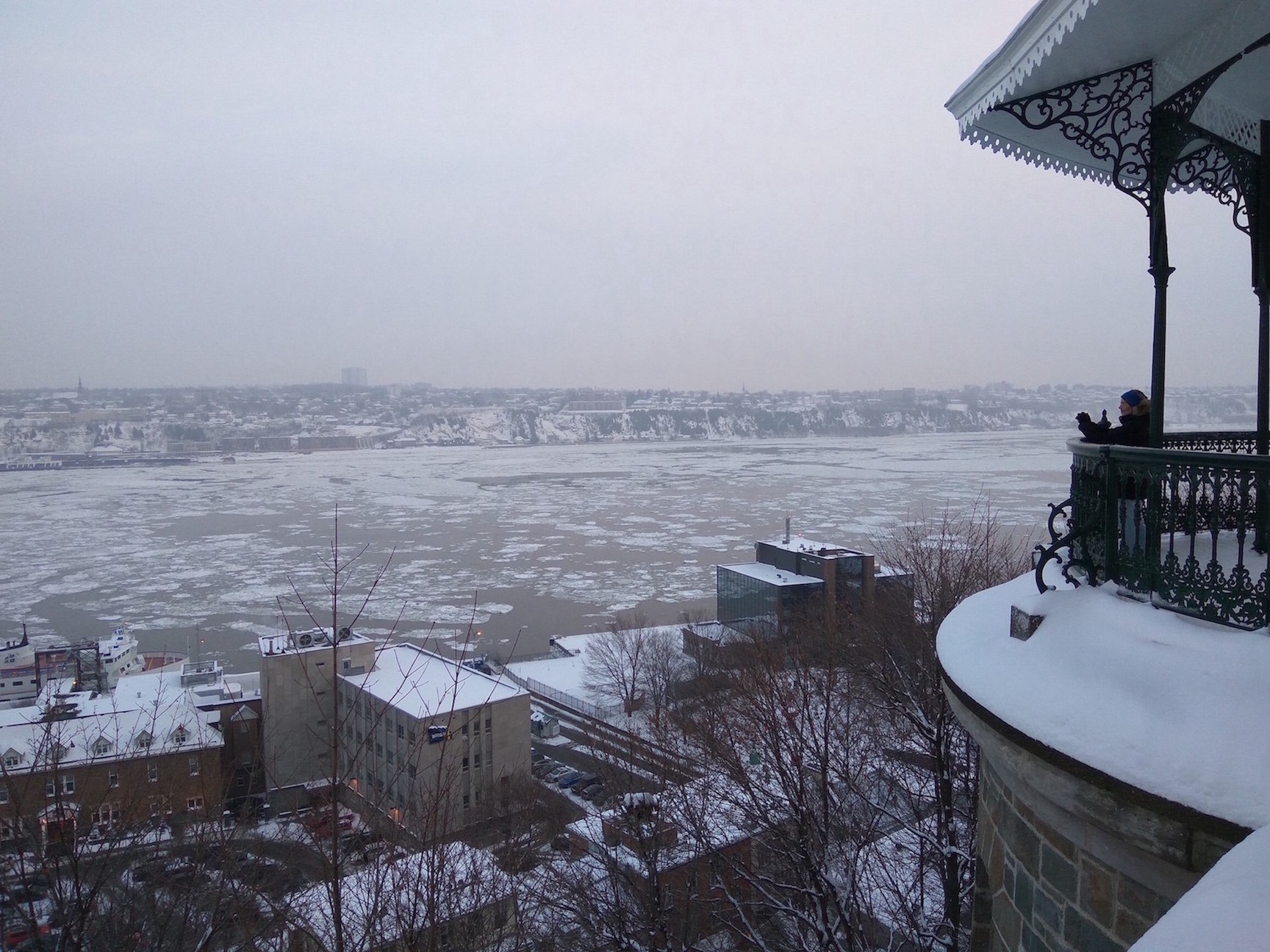 Later, we venture back for a closer look at the river. Well below the elevated views of the terrace, a ferry runs between Quebec City and the nearby town of Levis every thirty minutes. As the boat glides towards the opposite bank, we can hear the faint crackle of ice breaking up beneath the ponderous prow. From the front of the ship, the view is even better than it was from above. In either direction, there’s a sparkling skyline foregrounded by flotillas of pale ice. 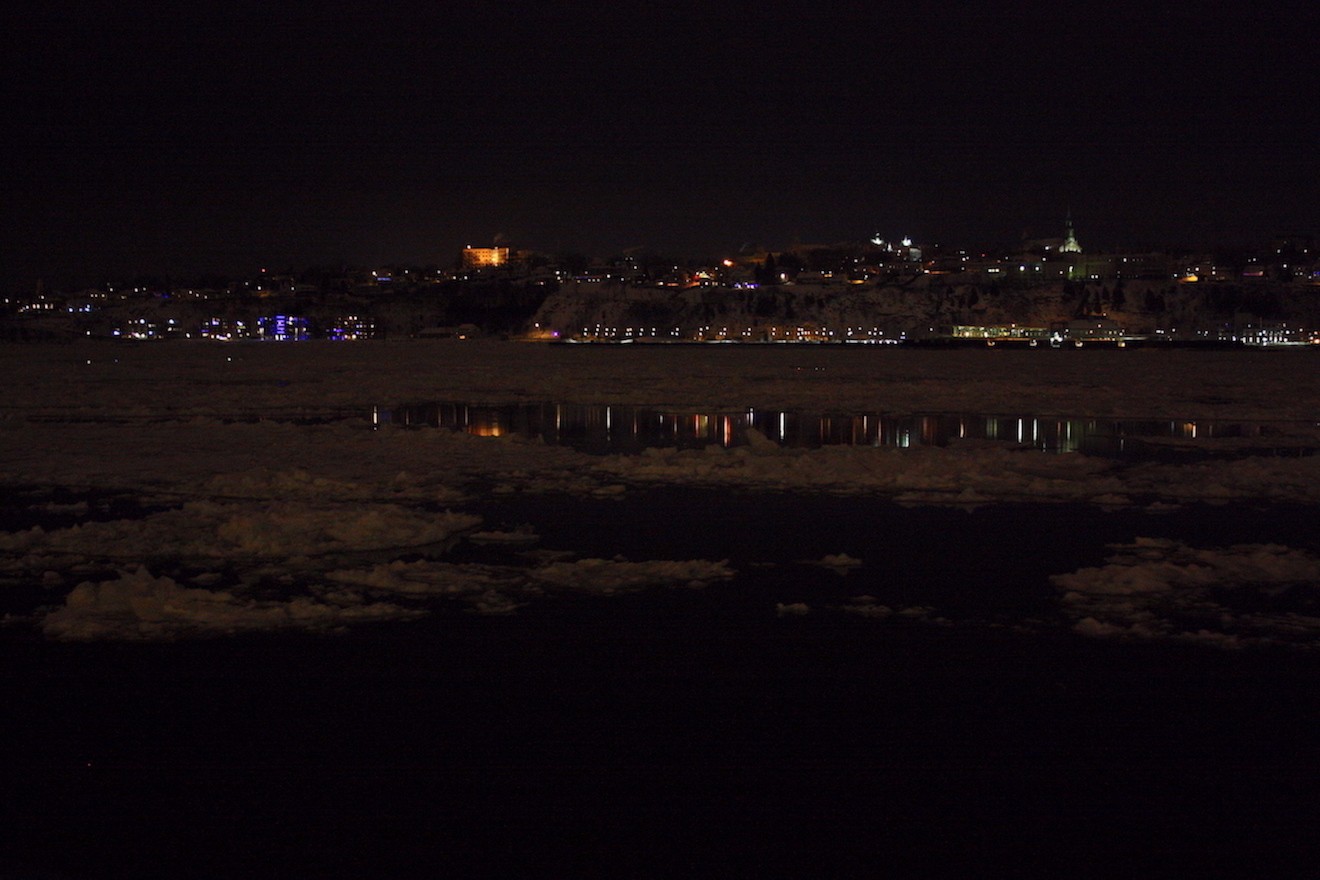 For a taste of local eats and drinks it’s back to Old Quebec again. CAD10.25 at a laidback diner, Snack Bar St.-Jean, buys us a heaping mound of the local specialty, poutine. This particular variety, poutine galvaude, comes topped with shreds of turkey and green peas along with the requisite fries, cheese curds, and gravy. It’s hearty and satisfyingly fatty, which seems to be a trend in local food. 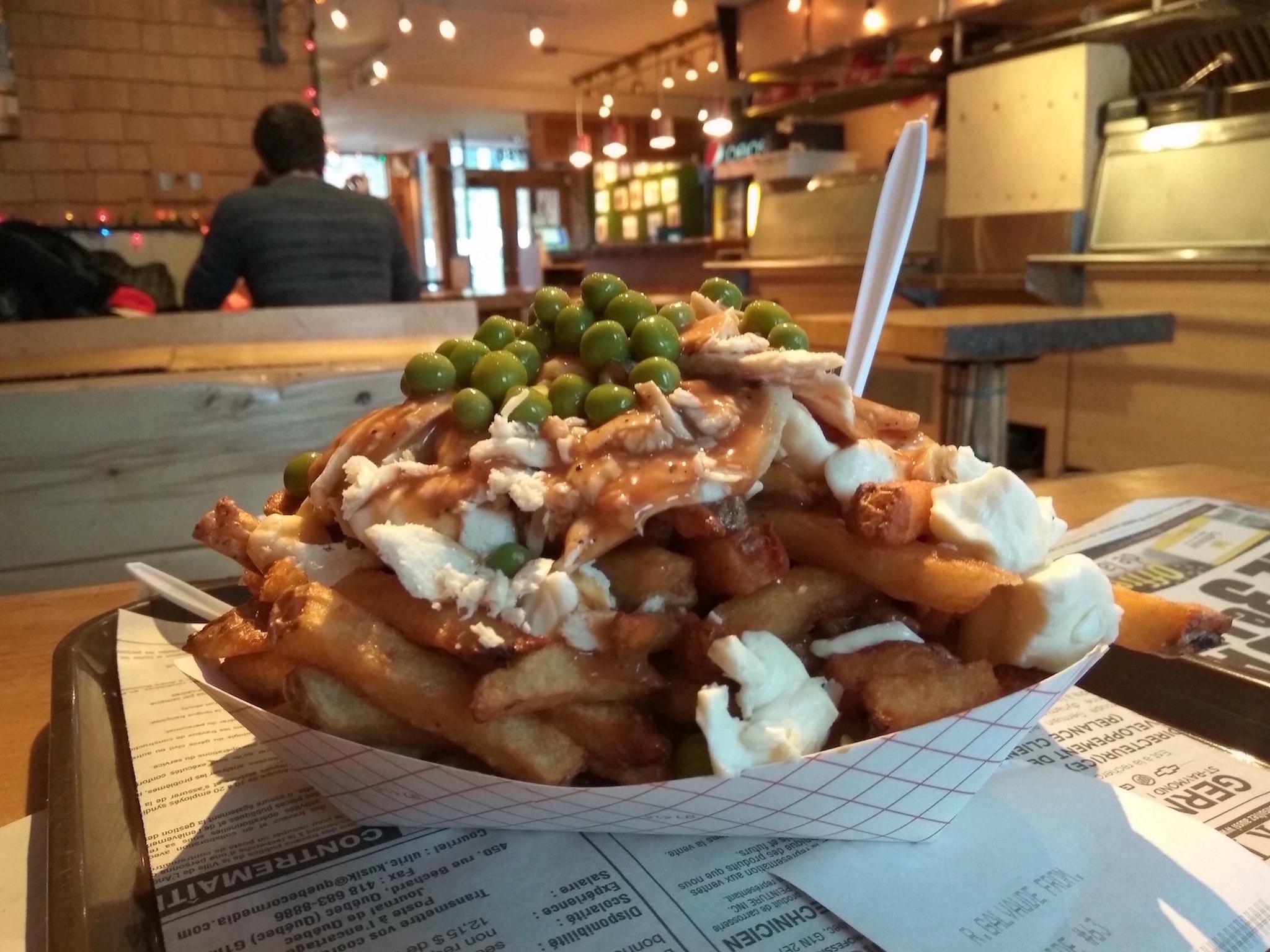 For entertainment we move to a prominent bar, St. Alexandre, where jazz, pop, or folk acts take the stage almost every night. The music scene here may not be as well known as that of the more cosmopolitan Montreal, but it’s clearly still thriving. The local beers, another Quebec specialty, don’t disappoint either.

For some real food we go downtown to a quirky pub that serves up meals for only CAD4.95 each. Le Bureau de Poste, named after the former post office building that houses it, is a favorite haunt of students and the general alternative crowd. It’s no gastropub, but what it lacks in pretension it makes up for in solid, well-executed sandwiches and snacks.

Finally we end the night in another hidden gem, a bar on rue Saint Jean that has only a single front door and no sign. It’s a local spot that flies under the radar of most passersby, and appropriately enough it’s called Le Bateau de Nuit, which translates to “The Night Boat.” 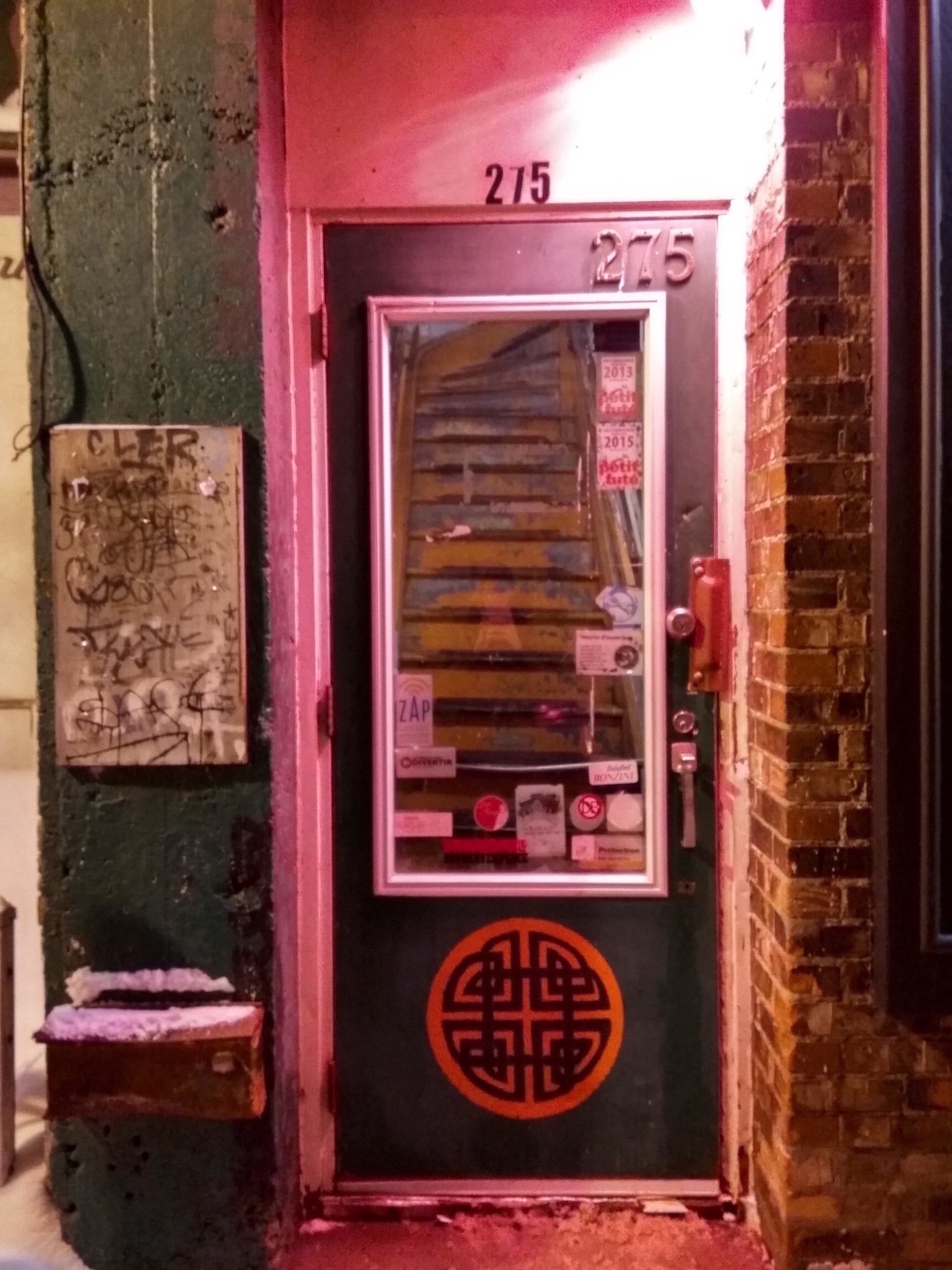 After climbing a flight of stairs we emerge into a dark space that, with its brick-red walls and red-tinted lighting, looks vaguely hellish. The decor is nautical, of course, and the man behind the bar has a beard that would make a buccaneer proud. In the background, the dull roar of heavy metal meshes with the noise of half a dozen animated conversations.

The atmosphere couldn’t be more different from the many polished touristic sites we’ve visited so far, but it’s comforting in its own grungy way. It’s also our last planned stop of the night, a respite after a long day of trudging through subzero temperatures. We sip on our glasses of craft brews, talk, play a game on the bar’s antique foosball table. Then we slip on our thick coats and gloves again. It’s getting late, after all, and there’s still so much to experience tomorrow.