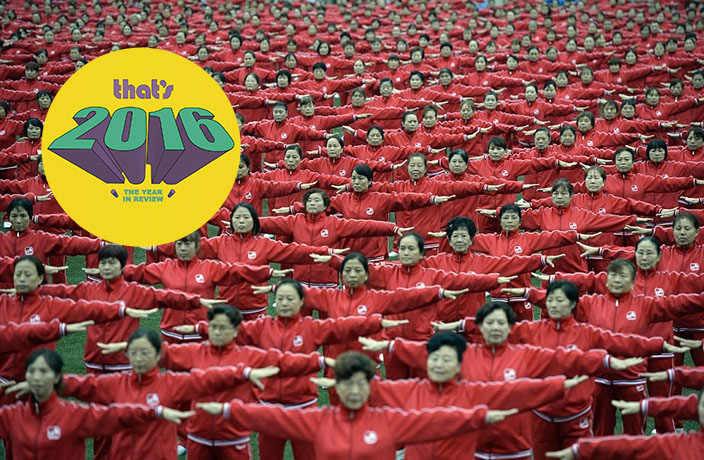 China seems to have a knack for breaking records, whether they're of the Guinness variety or just your run-of-the-mill historically superlative feats. We've counted down some of the more impressive and downright bizarre records set in the Middle Kingdom in 2016. Thousands of people — 1,731, to be exact — with questionable music taste overcame the limitations of the human condition by reaching under their seats and putting luminous antlers on their heads at popstar Luhan's concert in Beijing this March. The incredible accomplishment that has never been attempted and will probably never be attempted again was the largest gathering of people wearing antlers. (The 'Lu' in Luhan (鹿) means ‘deer’). A Hunan woman reportedly set a Guinness World Record for her 17-month-long pregnancy in August. State media said that Wang's pregnancy set a Guinness World Record, however that record doesn't actually appear anywhere on their website, nor has an official announcement been made on their Twitter feed.  Prior to Wang's case, the longest pregnancy on record most commonly cited appears to be that of Los Angeles resident Beulah Hunter, who in 1945 gave birth to her healthy daughter Penny Diana after 375 days. China's annual "Largest Melon" competition was held in Beijing back in May. This year’s winner was a 46-year-old farmer named Li Fengchun, who somehow managed to grow an astounding 176-pound watermelon. According to Li, he spent the past 30 years cultivating this prized melon. Did you know planking competitions are a thing? Neither did we. But apparently Beijing hosted the 2016 Plank World Cup in May. Yes, the Plank World Cup is actually a thing! Wait, it gets better. Beijing’s own Mao Weidong, a super-buff police officer, beat the world record with his mind-boggling time of eight hours, one minute and one second. Stylution International Corp. and Ayd Group, both of which are bedding brands in China, organized the world’s largest human mattress domino fall in Wuhan. The domino fall involved a whopping 2,016 people, each holding onto a mattress to fall back on. The entire domino effect took 14 minutes and 47 seconds. In June, 735 people gathered to set a Guinness World Record for the largest cream tea party at the Intercontinental Ruijin, shattering the previous record of 691 participants set in Swindon, UK. The affair was packed with guests sipping on cups of tea, accompanied by scones complete with clotted cream and jam. Glass-bottomed bridges seemed to be having a moment in China this year, but none made quite as many headlines as Zhangjiajie Grand Canyon's new glass bridge, heralded as the tallest and longest in the world. The bridge, which temporarily closed, had been subjected to 10 times the level of demand in its first two weeks of opening. (It has a capacity of 8,000 people). Maybe 2017 will be the year of the glass-bottom toilet? Square dancing, that classic phenomenon of grannies getting together to dance in parks and squares throughout the country, has been in the headlines a lot recently. In May, 31,697 grannies from Beijing, Shanghai, Guangzhou, Chengdu, Xi'an and Shenyang, along with square dance fans at all ages, took the tradition to a whole new level by simultaneously dancing to the same song, setting a world record. In November, aunties across China came together to create an epic synchronized square dancing routine featuring more than 50,000 participants. In total, 50,0085 people in 14 Chinese cities — including Chongqing, Shenyang and Nanjing — performed the same routine simultaneously, setting a new Guinness World Record for the largest synchronized square dance. (That record is not to be confused with the world record for largest choreographed square dance at #3). Tech giant Alibaba broke Singles Day sales records yet again in November, earning a whopping RMB35.3 billion (USD5 billion) in one hour, RMB10 billion within seven minutes and RMB1 billion in just 52 seconds. It went on to earn RMB121 billion in total, an increase of last year's totals (the previous record) by 32 percent. Among the models appearing on the catwalk at the 2016 Victoria's Secret Fashion show in Paris last month were four Chinese nationals, a record number. The first Chinese model didn't appear in the show until 2009, when Liu Wen made her Victoria's Secret runway debut.

The world's tallest air purifier* (*later proved to be a dud) The world’s tallest air purifying tower was tested in Beijing in October. Sadly, this device hasn't been able to go beyond headline-making after failing a series of air-cleaning tests. An environmental NGO also said that the device hasn't done its job “effectively.” Ouch. China completed the world's largest amphibious aircraft in July. The aircraft, which can take off and land on both land and in water, replaces previous record holder the H-4 Hercules (otherwise known as the "Spruce Goose"), which debuted in the 1940s and was intended to transport Allied troops during World War II.