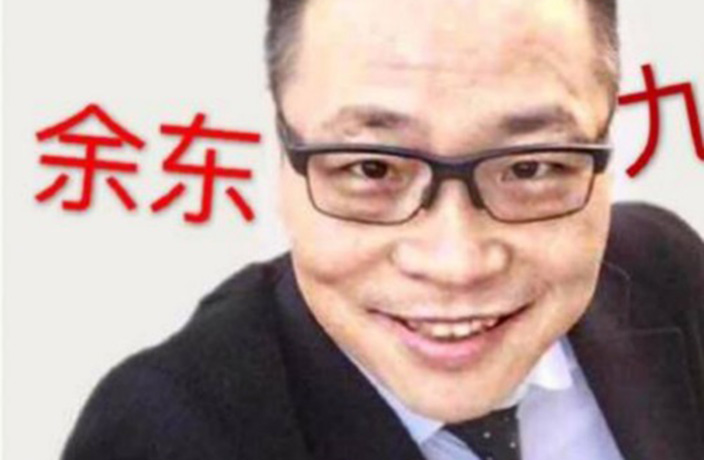 A plastic surgeon in Shanghai is accused of sexually abusing patients, in a story that is going viral on Chinese social media.

According to What's On Weibo, the story began making waves after a woman using the pseudonym "Tutu" shared her nightmare experience as a patient of Dr. Yu Dong at the Ninth People’s Hospital in Shanghai.

In the post, which racked up millions of views before being removed, Tutu explained that she was 19-year-old woman who wanted surgery to fix her lower jaw. She saved up money for the procedure by working on holidays and finding part-time jobs. She says she found Dr. Yu by searching online. 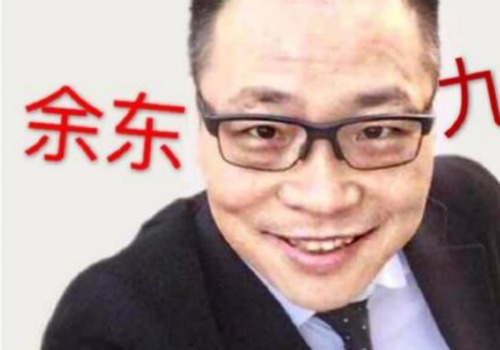 When Tutu finally got an appointment with Dr. Yu, he told her it was not possible to operate on her lower jaw without also performing surgery on her chin. So she agreed to do the procedure because she "trusted in his expertise."

The first major red flag came on the day of her operation, when she met another patient in the waiting area who told Tutu that she was getting a second surgery to fix a procedure on her cheekbones because it "did not come out right."

Then, after she was admitted into the hospital, Tutu claims she was molested by Dr. Yu (translation via What's On Weibo):

“Right before I would go on the operating table, I met Dr. Yu Dong in his office together with two other girls to briefly discuss our surgeries... One of the girls named Hu then told the doctor that he had also had a breast surgery. The doctor then suddenly reached out, put his hand inside her hospital gown... and touched [her breasts]. When I asked Dr. Yu Dong about my own surgery, he just quickly withdrew his hand from Hu’s hospital gown and suddenly touched my breasts. He smiled and half-jokingly told me 'they definitely are not fake.'"

Right before the surgery, Yu allegedly called the girl into his office via text message. It was there that she was first raped:

“My mind was muddled, and before I could respond he had already locked the office, pinned me to the bed and had sex with me. It all happened within seconds and afterward Dr. Yu Dong quickly got up, pulled up his pants and told me he was being too crazy and begged me not to say, that he had never done this before and just really liked me."

After the surgery, Tutu had a horrible recovery. Despite swelling and pain in her face, the hospital encouraged her to discharge due to a lack of beds.

A week later, the pain and swelling didn't subside and Tutu began to suffer from a fever, requiring a second hospitalization. The pain was so bad that it caused her to cry, and she became weakened and dizzy due to the fact that she hadn't eaten properly in two weeks.

Though Tutu didn't want to see Dr. Yu again, she was forced to pay him a visit. Upon her emergency visit, she was allegedly raped again:

“He suddenly locked the door, barbarously pushed my head against the office desk, tore my clothes and entered me. I was weak and light-headed, and could not even speak because of the tube in my mouth (…) After it had happened, he repeatedly warned me not to speak out about it and said that the expenses of my second hospitalization would not be charged."

Following the second hospitalization, Tutu's wounds did not improve. When she went in later to get her stitches removed, Dr. Yu agreed to do it only if she "satisfie[d] his needs." He then allegedly orally raped her.

Tutu still suffers from unbearable pain months after the procedure. And while Dr. Yu told her there were no problems post-operation, a CT scan revealed broken bones and two big holes in her chin. She shared the scan to Weibo. 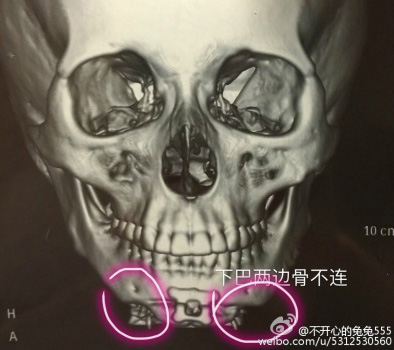 Tutu also revealed that it wasn't until she got the CT scan that she discovered Dr. Yu had performed a V-Line operation, a controversial surgery many hospitals are forbidden from doing. The procedure involves cutting the jaw into a V-shape.

Following the Tutu's accusations, several other patients have reportedly forward with stories of their own. Tutu wrote that she received a number of private messages from female patients who were also molested by Dr. Yu. (Tutu's account has been removed from Weibo since her post went viral).

Some commenters also revealed their own problems with the hospital itself (translations via What's On Weibo):

"This hospital has many dirty practices."

“I had a nose job in this hospital in June, and it completely failed. My nose is crooked.”

“I had my eyelids done by Dr. Yu Dong, and he was terribly impatient. It was the first time I had ever had a surgery and I was so scared, but he never consoled me and only ridiculed me. (..) Although I did not experience the same problems as the author after the operation, I do feel like Dr. Yu Dong is evil and has no medical ethics."

In response to the allegations, the hospital released a statement announcing that it is investigating the case.

Dr. Yu's wife also made a public statement saying that her husband denied all the allegations and that she supports him.

[Images via What's On Weibo] 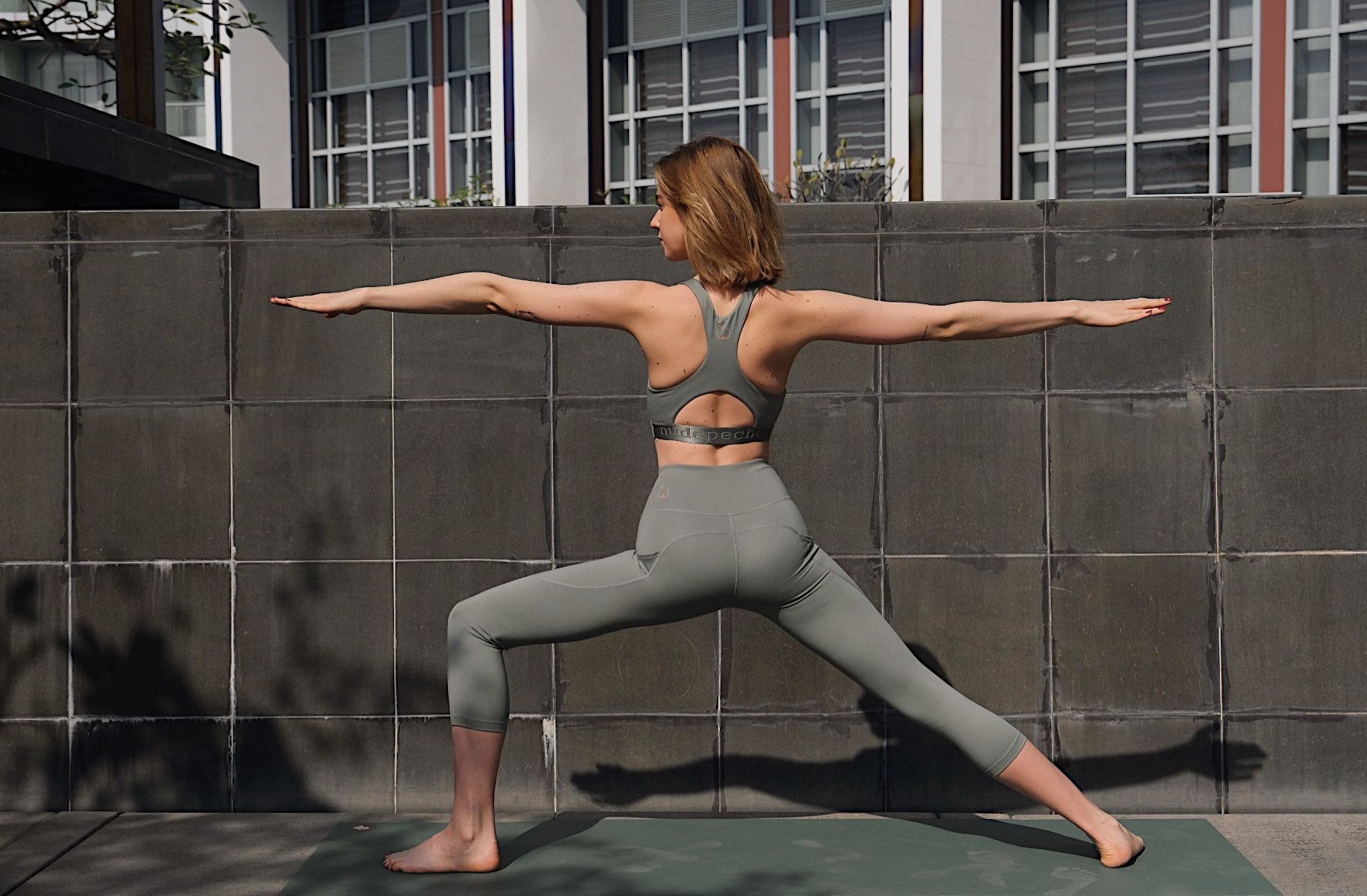