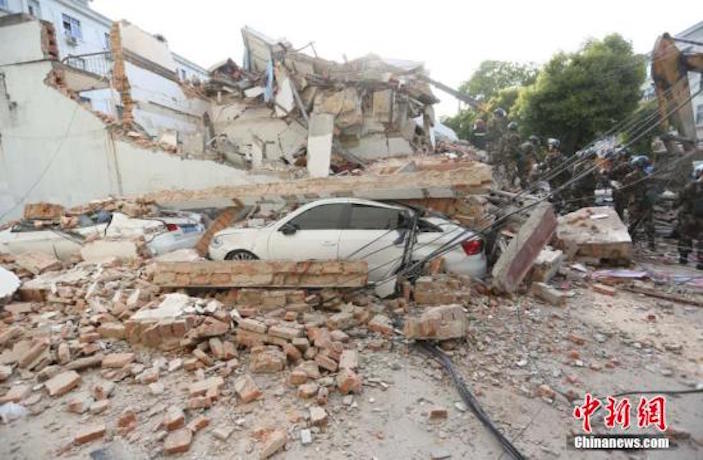 A 3-story house on Xixia Lu in Shanghai's Songjiang district collapsed at around 1pm Monday, injuring one woman and a child, according to an announcement on the district government's official Weibo account. Rescuers work against clock to clear the rubble.

Rescue efforts in the Sheshan compound began immediately after the accident. Around 400 people and two excavators were dispatched to the scene in a rescue that lasted until the early hours of Tuesday morning.

When the building collapsed, huge cloud of dust billowed out. Loud sound could be heard just prior to the collapse, sending passersby running for their lives. Watch video taken by a surveillance camera at the scene (VPN off):

Shortly after rescuers arrived, a middle-aged woman and her two-year-old son were found injured in the collapse. Both were immediately rushed to the hospital. According to reports, both were in stable condition but sustained a few fractures. No one else was found trapped under the rubble, and all 15 residents and eight renovation workers have been accounted for.

The building, which was built in the 1980s, housed shops on the first and second floors and residential units on the third floor. The reason for the collapse is still unknown, but reports have suggested it may be related to all the renovation work underway. Authorities are investigating the incident,  according to The Paper.