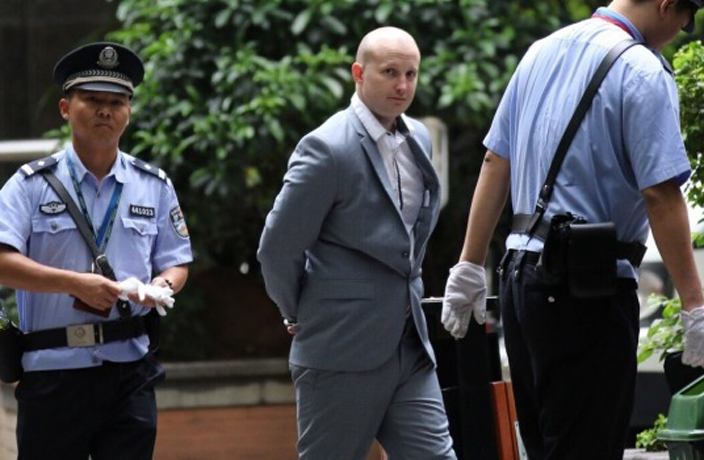 Peter Gardner, a 26-year-old man born in New Zealand but living in Australia, was arrested in November 2014 at Guangzhou’s Baiyun International Airport as he was about to board a return flight to Sydney with his girlfriend. He was caught with 30 kilograms (66 pounds) of methamphetamine, worth USD25 million, and was detained.

His girlfriend was released when the authorities determined she had no connection with the transaction, but Gardner was prosecuted to the full extent of the law —and in China, that might involve execution by firing squad.

Gardner pleaded to the panel of three judges, urging them to consider his young age, personal remorse and full cooperation with the police. The police, however, didn't agree with that last part. Indeed, their version of the story and his diverge significantly.

Gardner claims he was deceived, that he thought he was smuggling “peptides and tanning agents,” which are legal, and that the Chinese men who arranged for his trip and met him for the exchange had sold him meth instead of steroids. He claimed to have paid only USD13,000 for the goods, delivered in two briefcases, and that he never opened them to check what was inside, in what he called the biggest mistake of his life.

Prosecutors countered his version on two points: first, “common sense,” as they insist no one wouldn’t check the contents of the briefcases after having paid such a sum for them; and second, they found his DNA on the meth packaging. Gardner’s lawyer challenges the last point, claiming that police planted the evidence.

Nevertheless, the verdict will be rendered in the coming weeks. According to the law, possession of more than 50 grams of heroin or meth can incur the death penalty. In Gardner’s case, this means he could be executed by firing squad.

China has made headlines before with its notoriously severe drug laws, such as when they raided a rave in Shenzhen last month, arresting 93 people, including 50 expats, based on a tip that illicit substances were being ingested.