As the race for the Republican nomination heats up, GOP presidential candidates are once again turning to China as a reliable bogeyman for all their red-meat needs.

As the New York Times observes, in addition to this week’s stock crash and the many disputes straining Sino-US relations, targeting China is “less politically costly than focusing on immigration” as it allows candidates to avoid “alienating Latino voters who could be crucial in swing states in the 2016 general election.”

That was clearly the calculation for Jeb Bush this week.

Several days after Bush was hammered for using the derogatory term “anchor babies” – a phrase that opponents of birthright citizenship use to refer to the American-born children of undocumented immigrants – the former governor of Florida attempted to redirect his dog-whistle away from the US border and towards unreconstructed Yellow Peril believers.

Apparently, by “anchor babies,” Bush wasn’t referring to Latinos, but “Asian people coming into our country, having children,” he said.

This inspired a series of gleeful tweets from rival Donald Trump: 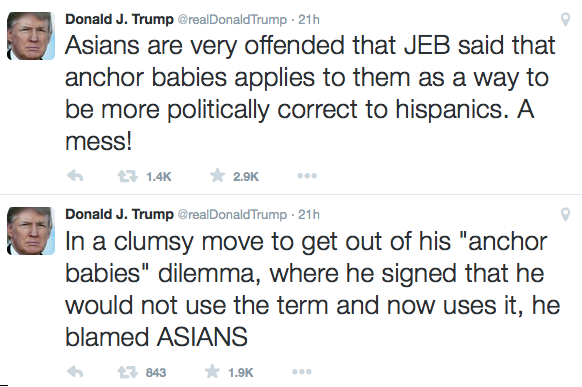 Bush’s campaign clarified that he was referring to birth tourism, whereby pregnant women travel to the US on a tourist visa to ensure their child is born with American citizenship. The practice is particularly associated with wealthy Chinese who have the means to pay for the costly services involved – visas, flights, illegal maternity hotels – and in 2013 was even the subject of a wildly successful Chinese romantic comedy called Finding Mr. Right. Last year, an estimated 60,000 children were born in the US to Chinese birth tourists.

Once it was revealed that Bush was actually attempting to denounce birth tourists from China (after all, it will be another 18 years before those ‘Asian anchor babies’ can vote), what did folks across the Pacific think?

Many of the most upvoted comments essentially agree with Bush, slamming "the powerful class and those who got rich illegally” for going overseas to have children as “contemptible people who abandoned their country.”

Others point out the absurdity of white Americans grumbling about immigration (“Bush’s ancestors came from the UK and gave birth in America”) and one joked that if the US put an end to birth tourism, China would ask for its money back.

Others simply rolled their eyes:

“Every US election year has the same formula – rag on China.”

“History proves that whoever attacks China the most gets elected.”

If that last comment is true, come 2016 Xi Jinping can expect an invitation to McDonad's from President Trump. Also, Bill O’Reilly does not know who Xi Jinping is.