Beijing has vowed to ensure a dazzling background of blue skies for the September 3 military parade celebrating the 70th anniversary of victory over Japan in World War II.

The capital’s notorious smog, which at times restricts visibility to a few meters, will be reigned in with temporary measures to restrict pollution in Beijing and surrounding provinces enacted in the days leading up to the event, meaning that everyone can enjoy an unimpeded view of troops marching through Tian’anmen and war planes soaring ahead. 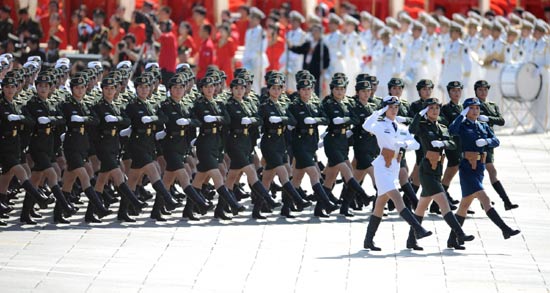 “Environment Minister Chen Jining said clean air was integral to the success of the parade and the overall image of the capital city,” Xinhua reports. (No word on how important the environment minister thinks clean air is for human lungs).

Thousands of coal-burning power plants, factories and construction sites will be closed for a week before the parade, and half the capital’s private cars will be banned from hitting the roads starting August 20. The Chinese government has made this year’s anniversary marking the end of the Second World War particularly high profile. The State Council declared a national holiday from September 3-4 to "enable the public to participate in official commemorative activities.”

Beijing will also close both its airports for three hours on the morning of September 3, affecting 269 scheduled flights.

The September 3 parade will be the first military parade ever to be held on a date other than October 1’s National Day and will also be the first time China has asked foreign heads of state to review its troops. Vladimir Putin has confirmed his attendance (after Xi Jinping attended the Moscow parade in May), but Japanese Prime Minister Shinzo Abe, who was last week criticized by China for not offering a new apology for Japan’s wartime aggression, is unlikely to accept his invitation.