There are, it turns out, quite a few people who speak Chinese. Native Chinese speakers aren't just the biggest single language group; they're as big as native English, Hindi, Spanish, Japanese and French speakers combined. And thanks to this infographic created by the fine linguists at the South China Morning Post, we can see zhongwen in all its juggernaut glory.

This graphic marks Chinese as a "macrolanguage," including all of its major dialects (some of which stray very far away from each other) like Mandarin, Cantonese, Hakka, Gan, Wu and Xiang. Mainland China obviously holds the vast majority of native Chinese speakers, but Taiwan, Hong Kong, Malaysia, the Philippines and much of Southeast Asia also include enough Chinese speakers to make it onto the graphic. 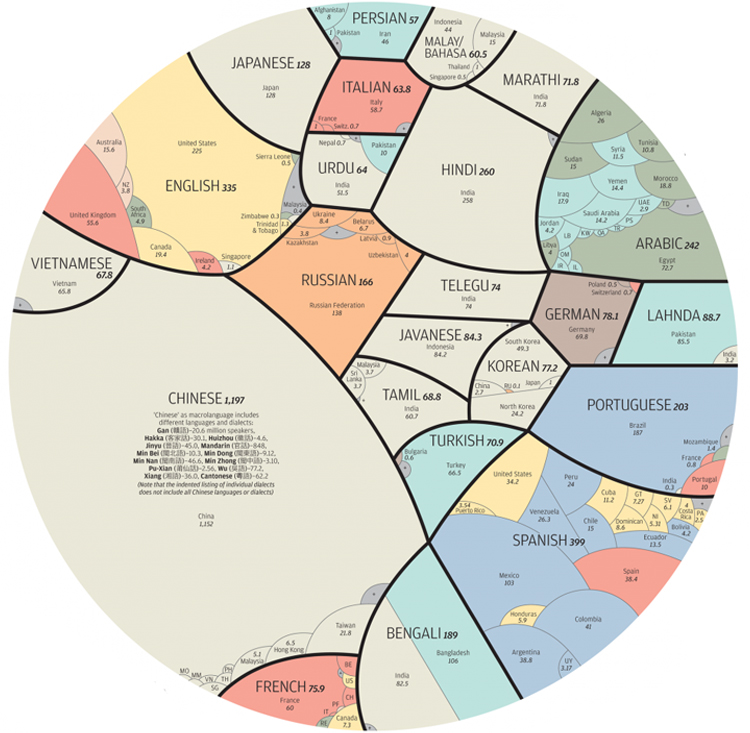 See the high-resolution version on SCMP

Many of the other language groupings on the map are essentially just a history of colonialism - the majority of Portugese speakers don't live in Portugal; Spain is just a dot on the section of Spanish-speaking countries. India, on the other hand, is all over the linguistic map - it holds the majority of speakers of Tamil, Hindi, Marathi and Urdu.

If dialects are counted as separate languages, then China would be one of the most linguistically diverse places on earth - there are more than 300 active dialects in the country (Papau New Guinea tops that list, with 839 languages). But if "Chinese" is treated as a macrolanguage, comprising all its various dialects, then it is the biggest, baddest, most native spoken thing on earth. INFOGRAPHIC: The unexpected overlaps between English and Chinese

Brother, loan me a word. Looks like Chinese fans are having a summer football fling with Germany... Chinese premier Li Keqiang has joined President Xi Jinping in the exclusive online cartoon club. A cartoon of Li appears in an infographic published on the central government’s website on Wednesday.