News has been surprisingly quiet for the past several hours. People's Daily has tweeted a new casualty total: 14 confirmed alive, 5 dead.

That still leaves 439 people unaccounted for, which is an extremely large number of people considering that the recovery effort is now 18 hours on. Military divers and rescue vehicles have been deployed throughout the area.

Local, national and international media are reporting with (seeming) ease, much more open than the complete media shutdown seen after the 2011 high speed rail crash in Wenzhou.

This photo from @CCTVNews has been making the rounds online, with the caption "85-year-old woman rescued from the capsized ship, she is in good condition." 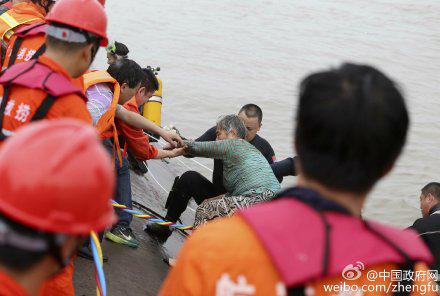 So far, this woman is one of a precious few confirmed rescues - different news sources have been releasing varying numbers, but most have hovered in the range of 10-15 people saved, of the 458 who were on the ship when it sank.

12 people have been rescued and 5 are confirmed dead according to state news sources via Quartz. The ship's captain and chief engineer have reportedly been rescued.

The latest reports say that the ship sank in 10 minutes (not the originally reported 2) and capsized, and that most of the passengers aboard were tourists between 50 and 80 years old.

Tom Philips, Beijing correspondent for The Guardian, has tweeted the following passenger breakdown (this is not confirmed).

This is an incomplete list (it doesn't add up to 458) but shows that many of the passengers aboard came from Jiangsu Province, from where the ferry set sail.

One confirmed dead, 97 identified as from Shanghai agency

BBC News is reporting that one person is confirmed dead from the sinking. Worryingly, the BBC also cites "about 10 people have been rescued so far," revised down from the initial "20 people" being reported earlier this morning.

CCTV News has posted on Twitter that 97 tourists aboard the ship were from the Shanghai Xiehe Travel Agency, which means that they may have been from the city itself (it is also possible that they simply booked the tour through Shanghai).

There is also chatter on Twitter saying that, before the ship capsized, winds "hit 12 on the Beaufort scale" which is classified as hurricane-force winds of at least 117 km/h (73 mph).

About 20 people of the 458 initially aboard have been rescued from a ferry that sank late last night in the Yangtze River in Hubei Province. The ship sank in just two minutes and with no distress signal, after it was caught in a storm.

People's Daily reports that rescuers have heard "responses" after knocking on the hull of the ship, and that many people may still be alive inside.

The ship was on route to Chongqing, coming from Nanjing, and sank around 9.30pm last night. Xi Jinping has issued a statement calling for an "all-out rescue effort," and Li Keqiang was last reported as heading to the scene. 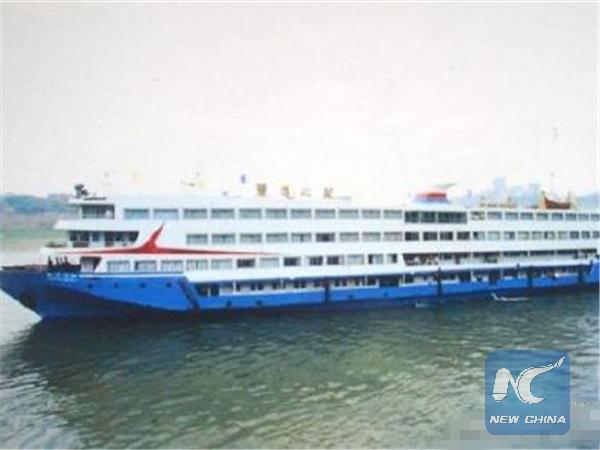 File photo of the type of passenger ship, via Xinhua

Rescue teams are currently braving harsh weather to save those trapped within the ship. Based on the numbers of people involved, this has the potential to be one of China's worst accidents in many years. 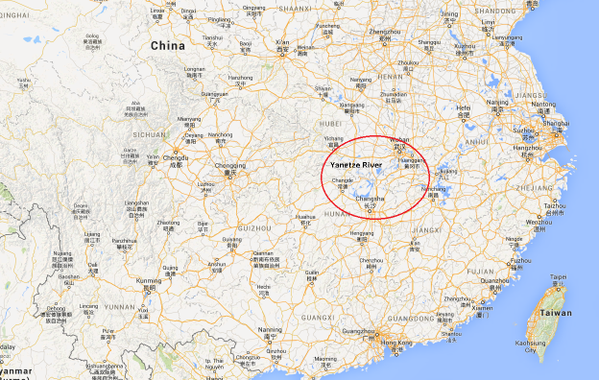 Beijing's new subway trains to hold 3,560 passengers at once

And you thought it was crowded now...