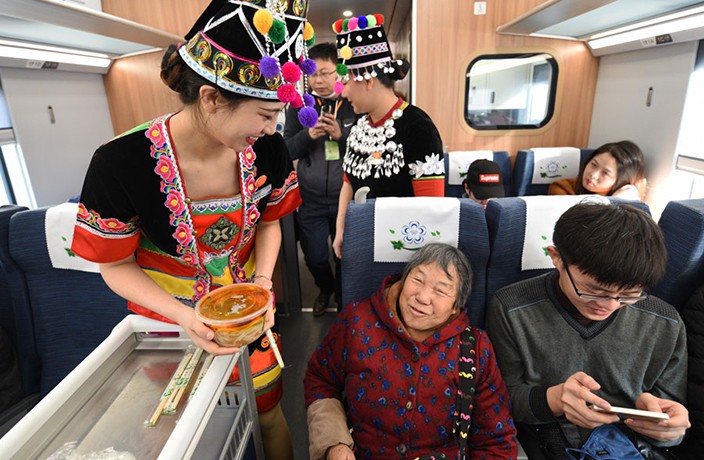 Bullet trains running between Shanghai and Beijing just got a whole lot better. On Saturday, the longest Fuxing bullet train made its first ever run from Beijing to Shanghai, China Daily reports.

The new and improved train now features 17 cars and is capable of transporting 1,283 passengers – that’s one more car and 90 more passengers compared to the largest of the older models. Passengers can choose from three different classes. The trains boast 22 business class seats, 148 first-class seats and 1,113 second-class seats.

On Saturday, the first of these trains made the journey from Beijing to Shanghai, departing from Beijing at noon and arriving at Shanghai Hongqiao Railway Station at 4.36 pm.

The new trains – which have been dubbed Fuxing (meaning rejuvenation) – were first unveiled back in June 2017. The first train had only eight cars. In July 2018, a model featuring 16 carriages was put into use on the Beijing-Shanghai line. The latest 17-car model measures roughly 440 meters in length.

The Fuxing bullet trains can run at a max speed of 400km/h but currently run at speeds up to 350km/h, much faster than the usual 300km/h that most trains in China currently operate at. They are also the first trains to be fully developed in China.

As of Saturday, a new national railway schedule has been implemented meaning there are now 16 more high speed trains scheduled to run between Beijing and Shanghai. It's now also possible to purchase train tickets for Lunar New Year's Eve.

Leaving Beijing for CNY? Here are the Latest Travel Rules