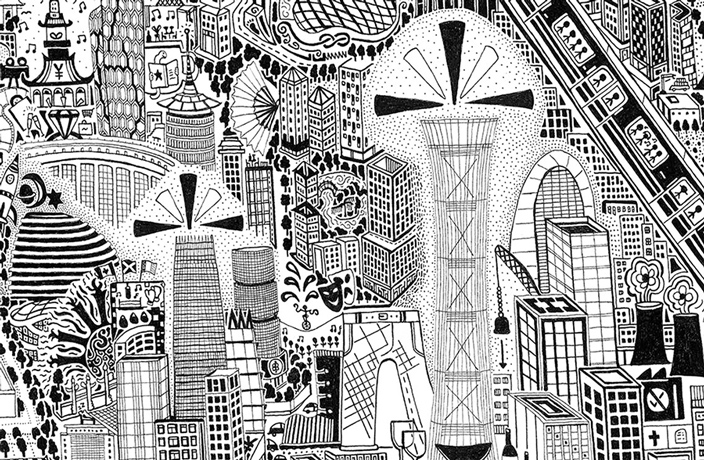 After months of literally wandering around the capital, and turning these wanderings into art, British artist Gareth Fuller recently completed his seminal Beijing artwork: ‘Fuller’s Beijing.’ The blackand-white drawing is a map of the city – but instead of adhering to strict mapping guidelines, Fuller imbued his own experiences, which included walking the entire Sixth Ring Road, as well as city happenings, into the piece. The intricate detailing, yet minimalist aesthetic of ‘Fuller’s Beijing’ is striking to behold. We chat with the artist, who has previously completed maps of London and Bristol, about drawing, Muay Thai and… public toilets.

That’s: Altogether, how long did it take you to complete the artwork? How much of this time was spent walking?
Gareth Fuller: In total, the art project took 13 months. Drawing-time was over a thousand hours – I kept a tally, like a prisoner in a cell, marking up my days in batches of five. The walk took place over a period of seven months, and in the end I trampled approximately 1,385km. I did a lot of time in the saddle too – I was an Ofo addict. But I recently gave up after seeing too many dead bicycles in their graveyards. The scale of waste made me furious. 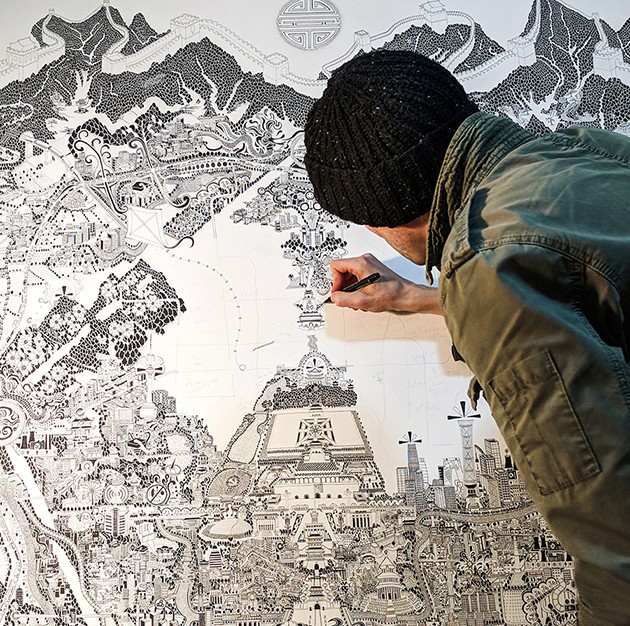 What were your biggest challenges completing the project – and what came easily?
I was constantly aware of how little I knew about the city, thinking my knowledge wasn’t deep enough, but I think there are enough ideas in the work, now that it’s complete. Unlike my other works, I depicted less personal experiences and more overarching themes that are relevant to Beijing life. The easiest part was the walking and cycling research. The city is so easy to navigate with pavements and cycle lanes.

“Drawing-time was over a thousand hours – I kept a tally, like a prisoner in a cell, marking up my days in batches of five”

When we spoke a year ago after your walk around the Sixth Ring Road, you lived in Beijing’s outlying Tongzhou district. Did you ever end up moving closer to the center?
I stayed in Tongzhou mostly to maintain my productivity. There are fewer distractions in the suburbs and although I’m a social creature at heart, the isolation spurred me on. The great thing about living in Tongzhou was having to travel into the city, rather than being central and so limiting my personal geography. 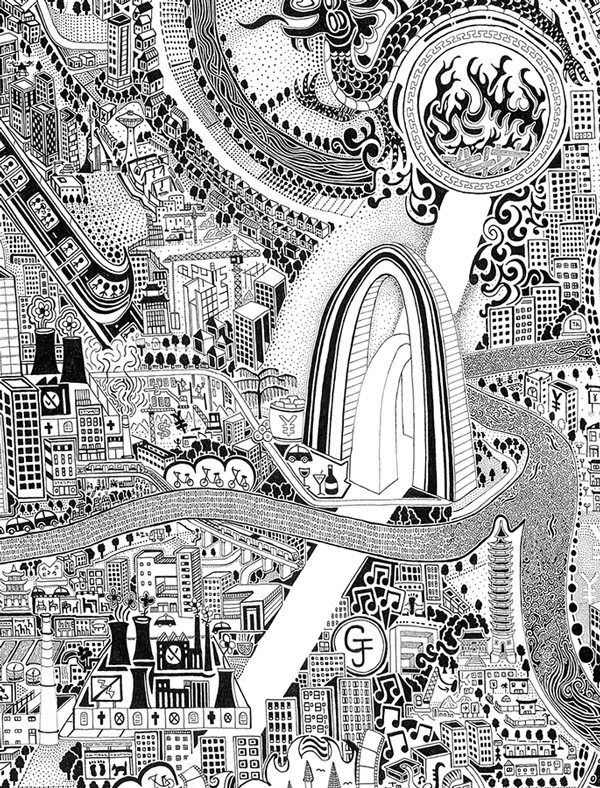 Above: The CCTV ‘pants’ can be seen next to the soon-to-open China Zun tower 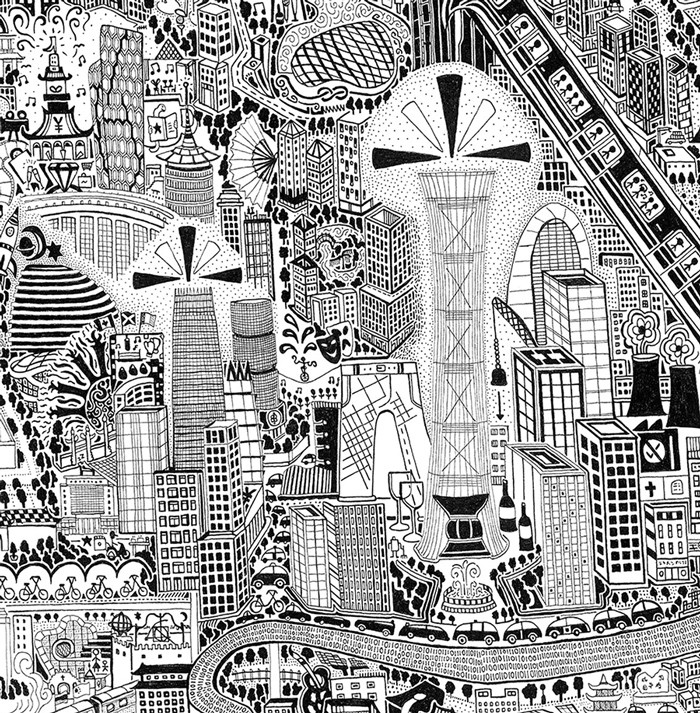 Above, in Fuller's words: “At the bottom of Rainbow Towers, a concept building due for development is represented by a pot of gold yuan. My ‘GJF Monogram,’ a traditional form of signage by mapmakers, is drawn close to where I lived.”

What did you do during your spare time when not working on ‘Beijing’? Or was every moment ‘research’?
Spare time? [Laughs]. At the beginning I was training Muay Thai at Alpha Gym, coached by Sean Wright and his team. I still owe those guys a lot – I don’t think they realize how helpful they were, putting my mind and body in the best place for creativity. Now that I have time, I hope to go back. Keeping fit is essential to my art as it can be [physically] demanding exploring urban environments every day.

Is there anything you discovered about Beijing that may surprise people?
That the cleanest public toilets, in my opinion, are along the Third Ring Road.

What’s next?
I want to learn more Mandarin and incorporate this process into my art. Where and when is still unknown.... I think it’s a secret for now.

To see more of Fuller’s work, visit fullermaps.com. You can also see 'Fuller's Beijing' at Rosewood Beijing all month long. 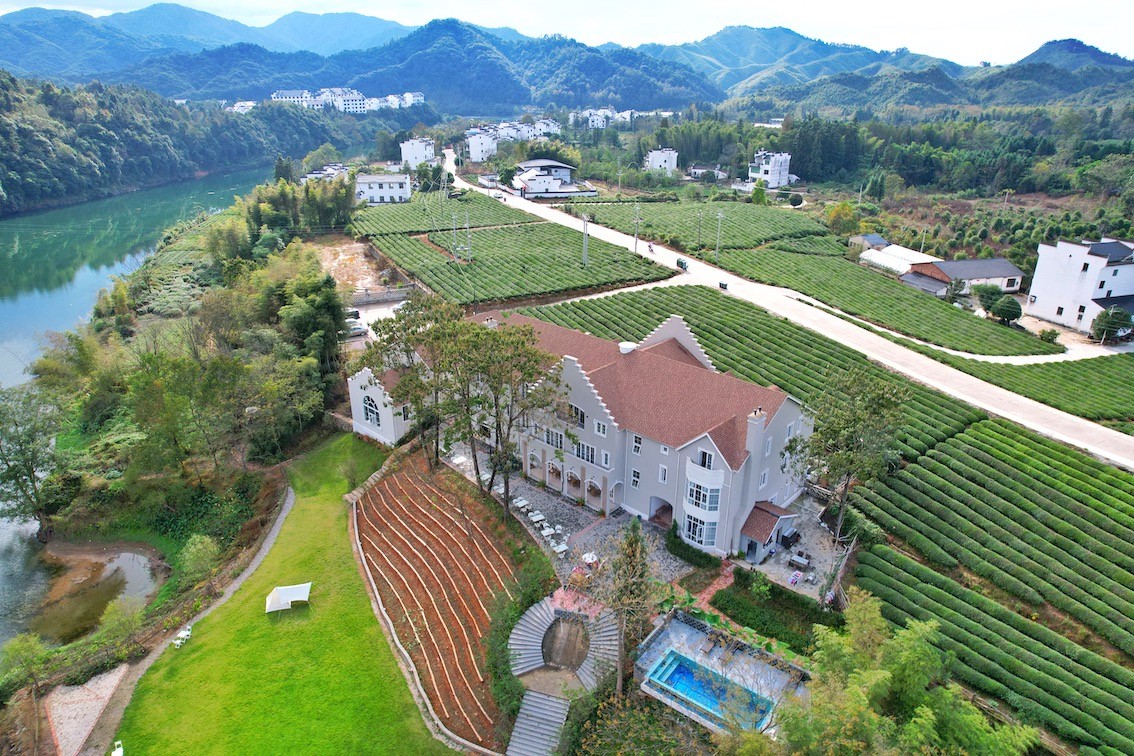