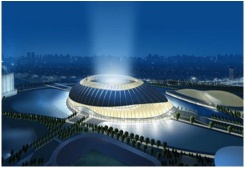 Tianjin Olympic Center Stadium, a stylish sports complex designed by AXS Satow, is the venue to have hosted 2007 FIFA Women’s World Cup and Football preliminaries at the 2008 Summer Olympics, and is the current home of Tianjin TEDA F.C.

With its building exterior resembling a splashing water drop, it is not just a stadium with a capacity of 54,696 seats; it also houses sports facilities, entertainments, exhibition halls, conference rooms and a shopping mall.