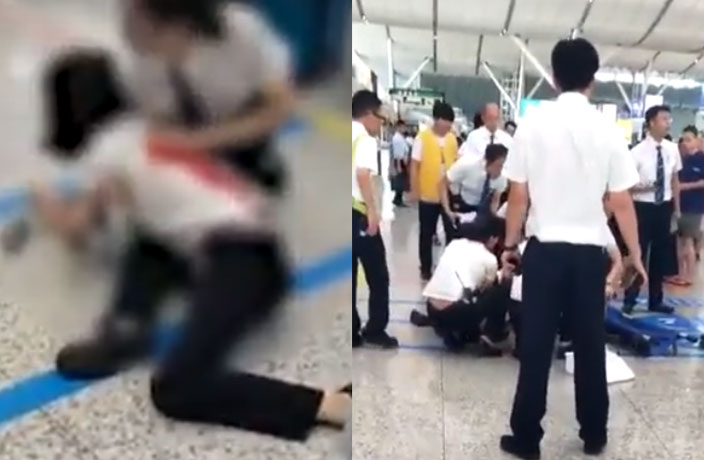 We’ve all been there: Traffic is horrible and you’re running late to catch your [insert transportation method] home from vacation; the cab pulls up to the station or airport and… disappointment – you’ve missed your plane/train/boat. Sure, the situation may be annoying, but we hope that most people would agree it’s no justification for violence. Violence, though, is exactly what happened earlier this week at Shenzhen North Railway Station when one Chinese traveler missed her train.

After missing her train on June 18, a 23-year-old woman identified as Ms. Luo stabbed a railway station worker in the back. The attacker was reportedly a tourist visiting Shenzhen.

Video footage of the aftermath shows the victim kneeling on the floor as blood stains her white work uniform. A crowd of people can be seen gathering around the woman as other station employees rush to her aid. The video is currently available on YouTube.

Thankfully, the wounded woman, identified in media reports as 27-year-old Liu, was taken to hospital with non-life-threatening injuries.

Luo, on the other hand, is presumably in some serious shit. According to Asia One, she was subdued at the scene by security guards and earned herself a “direct ticket” to the local police station. (C’mon Luo, get a grip on yourself).

The attack is currently under police investigation. No word yet on how Luo managed to get a knife passed Shenzhen North Railway Station’s security team…

READ MORE: Man Who Attacked Shenzhen Expat with Knife Freed after Only 8 Months