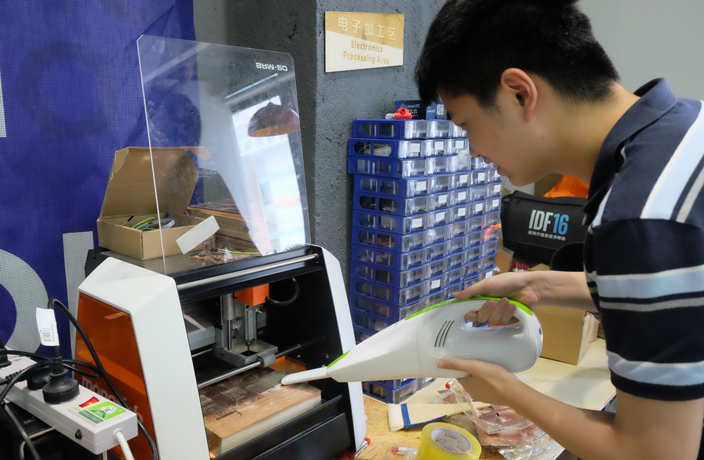 “Things move quickly here,” is a phrase often heard in reference to Shenzhen’s tech scene. The speakers usually aren’t referring to name-brand companies like Lenovo or Huawei either.

Instead, it’s all about the grassroots scene, including the cutthroat competition between shanzhai producers, each pushing out their own new and improved version of the iPhone, for instance. Alongside the local ecology, and sometimes even part of it, is the maker scene.

Six years ago, the first Chinese hackerspace opened in Shanghai. Called Xinchejian (新车间), its founder David Li described it as a place where tinkerers could bridge “the real world with the virtual, demystifying technology by hacking it.”

Since then, ‘hacking’ and its close cousin ‘making’ have come a long way on the mainland. Both terms are used to describe the practice of experimenting and creating, often in an open and collaborative environment. While hacking usually has to do with hardware, making can encompass anything from programming to woodwork.

The Chinese equivalent of maker, chuangke (创客), has become a trendy media catchphrase, while the growth of makerspaces has boomed nationally, largely thanks to government encouragement. From a single space in Shanghai, the number of makerspaces in China grew to over 100 in 2015, according to a report by the British foundation Nesta. The movement has also shifted its focus to southern China and Shenzhen in particular, where the dense concentration of factories makes for an abundance of cheap hardware and easy accessibility to manufacturers.  Despite its brief history in China, it’s sunk down its own roots here, created its own pantheon.

David Li is now a legend in Chinese maker culture. After Xinchejian, he went on to participate in research on local maker culture and to spread its gospel, giving TED talks and speeches across the country. He also founded SZOIL, a makerspace that is also “the first Fablab authorized by MIT in Shenzhen,” in 2014.

Pan Hao (English name: Eric) is another oft-cited celebrity in the local community. He’s known for having biked all the way to Shenzhen from Beijing with only a token amount of cash in hand, going on to found a makerspace in his apartment with friends. This later became Seeed Studios, a well-known platform that provides hardware parts, guidance, and funding for fledgling maker communities. 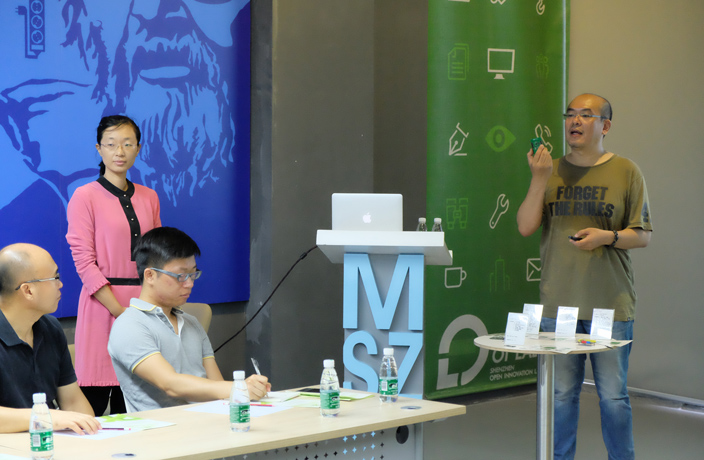 David Li talking at Shenzhen's SZOIL makerspace, which he co-founded

An offshoot of Seeed, Chaihuo makerspace, was the site of a visit by Chinese Premier Li Keqiang at the beginning of 2015. His explicit blessing of the maker movement spurred a flurry of activity; many universities and factories now boast their own makerspaces, complete with 3D printers and laser cutters, and Nesta reported that close to 20 percent of existing makerspaces receive financial support from local governments.

In short, makers in China are no longer the next big thing; they already are. And the Chinese government as well as outside observers expect even more: making, with its values of openness and innovation, will supposedly bring everything from financial wealth to an infusion of creativity to the mainland.

Of course, these expectations and financial support are restricted to a certain type of maker, the kind who is expected to contribute to practical advancements in hardware or software. In the makerspaces of Shenzhen, tools from screwdrivers to 3D printers abound, and words like Arduino (a versatile microcontroller chip) are casually tossed around.

During a weekly gathering at TGN Shenzhen, a relatively new coworking space that boasts its own makerspace complete with multiple 3D printers, workbenches and a gigantic laser cutter, makers discuss the Chinese scene. 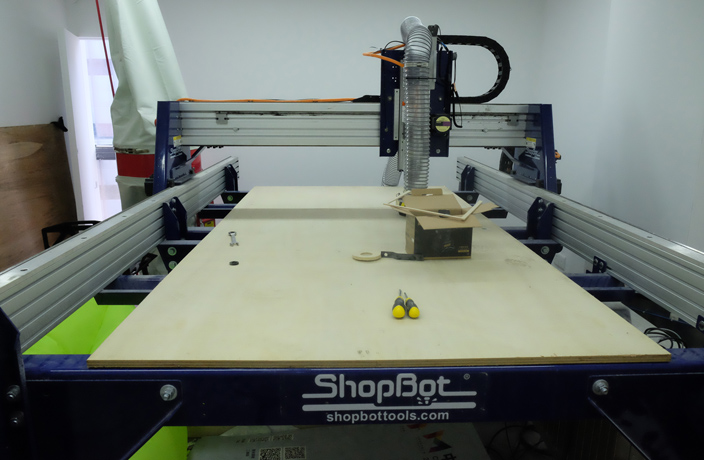 A laser cutter in SZOIL's workshop

In a private conversation, a few agree that limitations exist in today’s environment. Nowadays, the term ‘makerspace’ has become practically synonymous with ‘incubator,’ as everyone rushes to cash in on the maker phenomenon. A disillusioned woman comments that many makers no longer want to be associated with the label, for fear of the connotations it brings.

It’s tempting to call this ‘making with Chinese characteristics’; that what was once a pure hobby when it originated in the West has now been subverted into cold-hearted commercialism. But if it’s apparent that some makers aren’t always comfortable with what’s happening around them, they also clearly acknowledge that much of today’s booming culture wouldn’t be possible without outside support.

As maker and cofounder of a local 3D printer company Hans Stam states, factors in the environment here are redefining what it means to be a maker, and that comes with both benefits and downsides.

David Li, for one, is a strong supporter of the current Chinese maker movement. He sees no reason why commercialization and making should not mix. In fact, he openly advocates that makers shift their mindset from a philosophical high ground to a more practical one.

Outside help and commercialization, after all, can allow making to go from a hobby to full-time employment: “I can live on creating what I like.” Shenzhen, he predicts, will be a pivotal site for this shift. People involved in the tech industry here have already figured out one of the most important questions of making – how to turn it into a sustainable business model – and as such have a lot to teach makers from the West.

Maker culture has the potential to bring massive amounts of creative brainpower to play in this hub of manufacturing. Li predicts the number of makers in Shenzhen, which currently numbers in the tens of thousands, will “scale up to millions.”

Other makers in Shenzhen see another hurdle to overcome: the gap in knowledge between makers and non-makers. Without proper education and outreach, they fear making will not properly take root in China.

Luke Henderson, who manages the makerspace at TGN and leads educational programs there, observed that many Chinese companies have turned their energies to youth education, sometimes more for profit than a real desire to teach making.

A lot of this education comes “in kit form,” which can limit a child or adult’s ability to experiment freely. While making has often been associated with difficult-to-use electronics, he himself tried to emphasize the accessibility of advanced tools whenever possible. When introducing 3D printers to kids, for example, he compared it to a bottle of toothpaste, squeezing out streams of plastic. James Simpson, learning director at the local Litchee Lab, takes a similar approach. In lieu of a single authoritative source that could convey “maker values,” teachers there use an “open source system” to assess students’ progress. Like the Girl Scouts, they award certificates or badges whenever a student demonstrates mastery of a particular skill.

In their adoption of this method, Litchee Labs is in fact only one in an international network of maker education programs. Simpson has hopes of Litchee continuing to build on their current system, and one day becoming a recognized authority in terms of education as well as media outreach.

Most of the makers I talk to see education as the biggest obstacle to growing maker culture in Shenzhen. But if they view progress on this front with a critical eye, they also keep in mind how relatively new maker culture is here.

Six years ago the first hackerspace opened in Shanghai. This year, Ankur Rawal, visiting China for the first time, found a positive haven of maker culture thriving in Shenzhen. An Indian grad student who is currently interning at SZOIL, his month here has been a whirlwind of discovery. He sees maker culture in the city as more developed than in his home country, although in both, the respective movements are still in the process of “getting there.”

Key to spreading the essence of making, he says, is lowering the “barriers to entry.” When he taught classes to kids back home, he started from the basics: “[I] ask a kid why a ballpoint pen is called a ballpoint pen.” No mention of 3D printers, Arduino or laser cutters.

Start with the basics, and go from there.