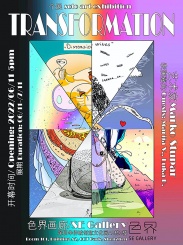 Foreword
...
Marko uses art in many different ways, including those already mentioned above. He is interested in all art forms, and from his experience, the key element that unites all art is pure, raw energy, an impulse we all have. It starts from abstract impulses and forms consciously or subconsciously into its final form… or sometimes it just stays in its initial form, as it does in for example “action painting”.

For Marko, the nature of art is allow him to overcome barriers everyday conversation can have, and directly strike the point, shifting viewers' reality and relocating them to a different dimension. In this recent period, he was focused on the transformation of unrestrained, pure energy, into ideas and creations, with high psychological and practical value, a transformation through release, and depression of thoughts into specific, formed messages that were used to communicate and stimulate viewers imagination.