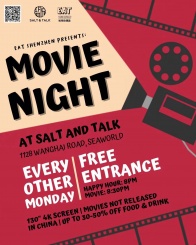 Our next Monday Movie Night is on Sept. 27th and this time, we’re doing it all little differently showing the first three (30-40 minute) episodes of the hit Disney+ series Loki back-to-back.

The series follows the God of Mischief’s whereabouts & antics after he escapes from The Avengers, in Avengers: Endgame, with the events of the TV show having HUGE ramifications for the entire Marvel Cinematic Universe, making it a must-see before any future Marvel movies!

Scan the QR code or add EATShenzhen on WeChat join!