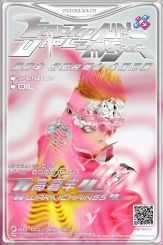 Shanghai based musician/performer Gao Jiafeng has his style evolved over time. He was recipient of 2016 composer-in-residency of Elektronmusikstudion Stockholm, 2014 Margaret Guthman Musical Instrument Design Competition, and 2014 Annual Musicians of Douban.

His new album <幻爱锐舞会 emotional="" dance="" music=""> mix with hyper Pop/ post-internet pop/ trance pop. At the same time, whole album is also a dancing game which designed by his team based on an open source called "StepMania". You can "play" the album while listening at home. All songs from this album are designed to three difficulty levels. You can purchase the official DIY Dance Kit (including USB dance mat) of "Emotional Dance Music" through jiafeng's official social media.