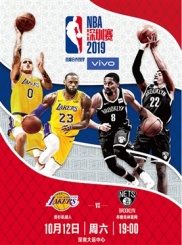 The NBA China Games 2019 will be the NBA’s 27th and 28th games in China, with 17 NBA teams having played games in Beijing, Guangzhou, Macao, Shanghai, Shenzhen and Taipei since 2004.

The NBA’s entity that conducts all of the league’s businesses in China was formed in January 2008 after its first office opened in Hong Kong in 1992.  The NBA currently has relationships with a network of television and digital media outlets in China, including a 30-plus years partnership with CCTV.  The league hosts hundreds of touring basketball events for fans, conducts community enrichment programs, and maintains marketing partnerships with a combination of world-class China-based corporations and U.S.-based multinationals.