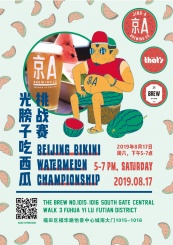 Bust out your sexiest Beijing bikini this month with Half Ton Brewery and Jing-A Brewing!

We don’t actually want to see your belly, but you should definitely come celebrate Jing-A’s fantastic brew – Jing A Beijing Bikini Watermelon Wheat Beer – at Half Ton Brewery. It’s guaranteed to be a fruity, fun-filled night of watermelon-themed games, tasty night eats and beers crafted with the stifling summer heat in mind.

Think you can devour watermelon at an ungodly speed? You’ll be pleased to know that this (otherwise useless) talent can be put to the test during our watermelon-eating championship. Additionally, watermelon-balloon-blowing contests and a ‘pick out the seed’ challenge will put your competitive edge to the test. And, of course, epic prizes will be awarded to those who reign supreme, including awesome Jing-A Beijing Bikini T-shirts, beer belly fanny packs, rounds of beer and more!

RMB38 will score you a ticket to the event, plus a 330ml glass of the delicious Jing A Beijing Bikini Watermelon Wheat Beer.

Map of The Brew