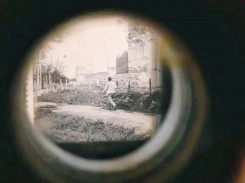 Anais Zhang’s great-grandfather-in-law, a Frenchman named Paul Verdun, was a pioneer photographer in the late 19th century and early 20th century. His hobby took him across France and Europe, leaving behind hundreds of black-and-white photos depicting scenic spots and scenes of daily life.
In the early days of photography, photos were mostly printed on glass. Paul Verdun used a piece of special equipment called Vérascope, one of the first 3D viewers.
Anais Zhang studied at the Guangzhou Fine Art Academy. In 1999, she obtained a master degree in oil painting. One summer, when she was in France visiting her in-laws, she discovered a huge wooden trunk in the attic containing these glass photographs. Surprisingly, from one generation to the next, the Verdun family had forgotten about this hidden secret.