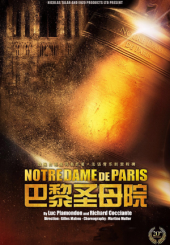 Having first enjoyed its Parisian debut in 1998 at the Palais des Congres in Paris, this original French production went on to sell out  across the world, and was translated into nine different languages. Following the opening of Notre Dame De Paris, the production was commended in the 2000 Guinness Book of World Records for its record success for a musical during its first year.

Children under 1.2m are not permitted