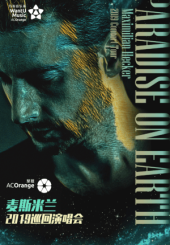 After performing as a drummer in a number of small German bands, and after one year of making music in the streets of Berlin, his demo tapes attracted the attention of famous Berlin based record label Kitty-yo Records, who released his debut album "Infinite Love Songs" in 2001. The album was very well received worldwide and even reached the top ten list of the New York Times’ album of the year contest in 2001.