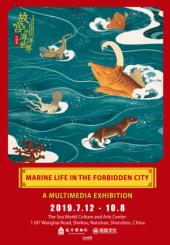 “Marine Life in the Forbidden City - a Multimedia Exhibition” is jointly sponsored by Beijing Palace Museum and Shenzhen Merchants Culture Industry Co., Ltd, and co-produced by Shanghai LinkA Culture Co., Ltd. The exhibition will be debuted at Shenzhen Sea World Culture and Arts Center on July 12, 2019 and last until October 8, 2019.

The "Marine Life in the Forbidden City", which is developed from “HAI CUO TU”, is a multi-media digital representation that transforms two-dimensional textual reading into a multiple sensory experience combining visual, audio and touch.

The Palace Museum used to be the emperor's home closed within high walls, and it was once the largest library and archives which were loaded with the quintessence of the millennia-old Chinese culture. It has also been a goal for this series of exhibitions to showcase, in a more audience-friendly way, to the general public what had been confined within and carry on our Chinese culture.

请带我去【Marine Life in the Forbidden City - A Multimedia Exhibition】