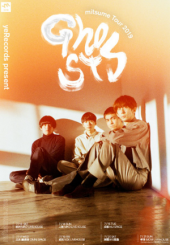 Japanese indie rock band, Mitsume started out in 2009 as a quartet self-recording in Tokyo, and began live performing in 2010. Their songs are led by upbeat yet laid back guitar riffs accompanied by Japanese vocals. Their new album ‘Ghosts’ was released in April, which is their fifth album to date. All singles, EPs, and albums have been through their own self-titled label. Lead vocalist Moto Kawabe stated, “Since our first album, we’ve been under nobody’s control but our own…we prefer to do whatever we can ourselves”.