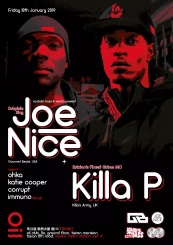 View all photos (9) »
This event has finished

Killa P:
Killa P is a renowned MC in the grime world. Hailing from Brixton, he’s acclaimed for his unique patois style and hard lyrics. Killa P became known as one of the UK’s prolific MCs while he was a member of one of the UK’s founding grime crews, Roll Deep. Contributing to many of Roll Deep’s releases including ‘In at the Deep End,’ ‘Rules & Regulations’ and ‘Return of the Big Money Sound,’ his style and flow led to commercial success and earned him a new generation of fans through his 2008 collaboration with The Bug on the seminal track ‘SKENG.’ Having found an audience in his own right, Killa P followed up this success with two self-released mix CDs – Killa Instinct and Killa Instinct Volume 2 in 2008 and 2009.