Carlijn van Ramshorst (No Exit, Interview) stars in this one-woman show about the woman whom Picasso never divorced and the woman who dared to leave him. It’s a compelling story about the emotional battle between art and love. .

You came up with the idea for the show. How did it come about?
After my last show Interview a lot of other countries where interested in having the show too, but logistics and finance made it difficult to realize. This fact, combined with my hunger for traveling and the wish to be independent, sparked the idea. I wanted to push and challenge myself to do the most difficult thing there is for an actor; to do a solo performance. Then I decided to push myself even further; to perform different characters. I wanted to do a show about relationships. I started searching for a story, which soon turned into the women of Picasso.

The concept I designed is ‘theatre in a backpack’, all props/ costumes/ stage travels with me in a large backpack. I do the lights myself too, making it a real ‘solo.' I love the flexibility of it, the show is adjustable to all sorts of venues like museums, restaurants, theatres or even large homes.

How hands on were you working with Harry Piekema on the script and direction?
Harry and I have been friends for years. I contacted him to discuss my new idea. He was immediately enthusiastic. We really had the same idea in mind of what the show should be about. We had a try-out rehearsal for two days to see if we could be colleagues besides friends, and it turned out great. I went to the Netherland to rehearse with him in a studio in Amsterdam. A week before opening night Harry will arrive in Shanghai to support me to be ready.

Harry wrote the script, it is inspired by books and documentaries I passed to him and all the conversations we had together about love and art and how people limit each other by making ‘images/ pictures’ of each other and not really seeing each other.   I am extremely happy with the end result. The show is about two of Picasso’s wives, but also about me as an actress, which gives it an extra personal dimension.

For people who don’t know much about Picasso’s personal life, could you describe your views on both of these people and their relationship to Picasso’s commitment to art?
Picasso had eight ‘wives’ (he wasn’t legally married to all of them and the relationships were not all at the same time) and in this performance I will be portraying two of them. The two that I found the most fascinating. In the play, the third ‘character’ is me, the actress, who also immediately addresses the audience.

Everyone will have a different point of view on both ladies. For me as an actress; I love them both, Olga was a Ballet Russe chorus dancer and Francoise is still alive (94 years old) and still working everyday as an artist. I understand their struggle of loving and living with a genius. I understand how they loved Pablo and how it influenced their lives and their own artistic careers. They are totally different from each other. What I can reveal is that I was absolutely astonished when I got to know more about Pablo, and how destructive it must have been to live with him.

Pablo was a bastard, I cannot deny that, but I also fell in love with him.  This show will give an insight in his relationships and I hope it will open up discussions about relationships in general. I think this is a universal theme; do we shape ourselves for our relationships or do relationships shape who we are? 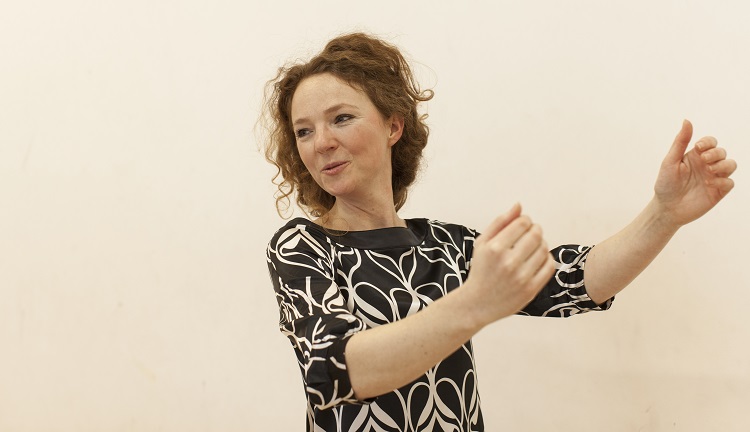 Mrs. Picasso will be a one-woman show. Was that always the plan and what are some of the challenges to doing a solo show? Will this be the first time you’ve done something like this?
First time and the biggest challenge I can give myself. Sometimes I wake up in the middle of the night wondering “why the .. I am doing this!?”. Haha. It’s a real stretch and I thought; if I don’t do it now, I’ll never do it.

The show is described as an “emotional battle between art and love.” As an artist yourself, have there been times you’ve sacrificed love for your art and how do you strike that balance?
First of all, I wouldn’t dare to compare myself being an artist like Pablo Picasso.  But yes, I do recognize the battle. You sometimes have to sacrifice your private life and sometimes, in my case at least, sometimes art is sacrificed for my personal life. Pablo would never agree here with me. His art was everything, and everything else had to sacrifice. And I believe that is what made him such a genius. I admire his dedication but I also wonder; maybe you just can’t be a genius and a social or nice person at the same time? For me personally, this is a battle too.

The show comes from the tradition of ‘location theatre.’ Could you describe what this means and besides Shanghai, where will you be performing Mrs. Picasso?
This means that the show is not only limited to be performed in theatres, but also museums, gardens, restaurants, conference venues or even large homes. “All the world is a stage”, literally. Later in April I will perform Mrs. Picasso in Yoga Garden on Fuxing Lu, for a selected audience. And then I will travel with my backpack to Amsterdam. Some museums there have expressed their interest in Mrs. Picasso. In the near future Hong Kong, Beijing, Singapore and more cities are on my performance list.

You’ve been doing a lot of film work recently, appearing in Firebird and Das Klagende lied from Mahler. Could you describe these projects and what are the biggest differences in starring in film compared to theater?
The Firebird recently had its world premier in the prestigious Concert Hall of Amsterdam. Das Klagende Lied has not been filmed yet. Lucas van Woerkum, the director is now busy traveling the world with Firebird, it is a symphonic film, the film is projected with live orchestras playing and the director edits the film on the spot entirely to the millisecond of the music, the music is always leading. It’s unique!

For me the biggest difference starring in film compared to theatre, is that you don’t have an immediate contact with your audience. Which I sometimes miss in film. But what I love about film is working with a large crew. It is amazing how everybody has it’s own task and only together you can make it to a success. A challenge in theatre, especially doing a solo, is building the arch, keeping your audience with you. In film the editor does this for you. I feel blessed that I get the opportunity to work in film, theatre and television.

You’re a bit of a Shanghai theater veteran, performing in No Exit and Interview. What are your thoughts on the city’s theater community and its audiences?
I experience Shanghai’s English language theatre scene as the Wild West, since it is not really established yet. If you have an idea and you’re entrepreneurial enough you can make it happen. Which is cool. On the other hand, it is a challenge to reach the audience. I hope in the near future this will become easier; all the online channels are already really supportive.

Do you find that it’s growing and have there been any shows you’ve recently seen that you’ve enjoyed?
I moved to Shanghai three years ago and yes I absolutely think the scene is growing, more and more theatre companies are popping up, which is good. My wish for Shanghai theatre would be that one day the offer of theatre is large enough like it is in any other metropolitan city… If you’d like, you could watch a show every night. Wouldn’t that be great?

I always enjoy the performances that Apphia Campbell does, I performed with her in No Exit, which was so much fun. She is super dedicated, professional and has a broad range, from funny Chirstmas musicals to her solo Black is the Color of my Voice, where she absolutely touched me.

What are some of the biggest challenges that people involved in the city’s English language theater scene faces and if there’s anything you could improve, what would it be?
I think on the one hand reaching the audience. And on the other hand the financial part, it is difficult to earn your money with only theatre. I know from fellow actors that this is the reason they are sometimes returning to their home country. So it would be great if that could change. I think sponsorship from companies would be a good support in establishing a more stable theater environment.  Even in Amsterdam professional theatre companies couldn’t live without this support.

Following the show, are there any projects that you will be working on that you can give us a preview of?
Travel with Mrs. Picasso around Asia and Europe. And filming Das Klagende Lied from Mahler.

We have a pair of tickets to give away. Simply e-mail win@urbanatomy.com by April 1 with the subject 'Mrs. Picasso' for your chance to win