A fairly common reaction I get from people back home when they watch my videos is “How the hell are you not in jail?” I’m a little surprised by these comments – I feel like everything I do is harmless – but I think a good majority of people think of China as some big scary totalitarian regime that dishes out severe sentences for the most minor offensives. I’ve had to take a few trips to the police department out here, and found that this couldn’t be any further from the truth*.

My first run-in with the police came while watching my beloved Shanghai Sharks play at Yuanshen Stadium last year (an experience well documented in Donnie Does Shark Tank, below). The 3rd quarter had just ended with the Sharks having blown their lead. The cheerleaders came out on the court and started dancing to K-Pop in the hopes that it would get the momentum back on our side. It was cute and all, but I sensed that the Shark Tank needed an extra boost to get the players and crowd amped up for the 4th quarter.

Without putting much thought into it, I decided to use my fake media pass, sneak past the security guards, rush the court and start dropping the most incredible dance moves this side of the… Yangtze River. The crowd loved it. The Shanghai Sharks staff loved it. And it was obvious that the media loved it too: as soon as I got off the court, I was bombarded by TV cameras and reporters wanting to know my story. I’m a humble guy, but anyone who has seen the video can tell you, I absolutely crushed that interview.

The only people who didn’t love it were the arena cops. The fact I was able to get on the court so easily made them lose face – and as you know if you’ve lived in China, that this is the worst thing you can do to someone. So as soon as my interview was over, a group of cops cornered me in the hallway and talked amongst themselves about what to do. Their main concern was how to talk to me (none of them could speak English) and they eventually had to bring in the one of the Shanghai Sharks employees to explain the situation:

“Look, the Shanghai Sharks fans love you. Even the Sharks staff all like the level of enthusiasm you brought. But, you know China, they have so many rules… So look, the cops are going to have to follow protocol and take you to the police station. Don’t worry, they just have to follow formalities. You won’t get into any trouble.”

I was put in the back of a cop car (no handcuffs, but another cop did accompany me in the back seat) and they drove me to the nearest police station. At the station, they placed me in front of the cells, but not actually in one.

Then the policemen proceeded to crush cigarettes and drink tea until they could find a cop that could speak English. While I waited, I tried to spark up a conversation with the dude locked up in a cell next to me, but he was drunk, and for some reason wasn’t in the mood to help me practice my Chinese…

I decided to do the next best thing and make history, by taking the first-ever Instagram photo of a Chinese jail cell. I used the Kelvin Filter, which is apparently regarded by most people as the worst Instagram filter. I apologize for that. It was one of my first times using the app. Rookie mistake. 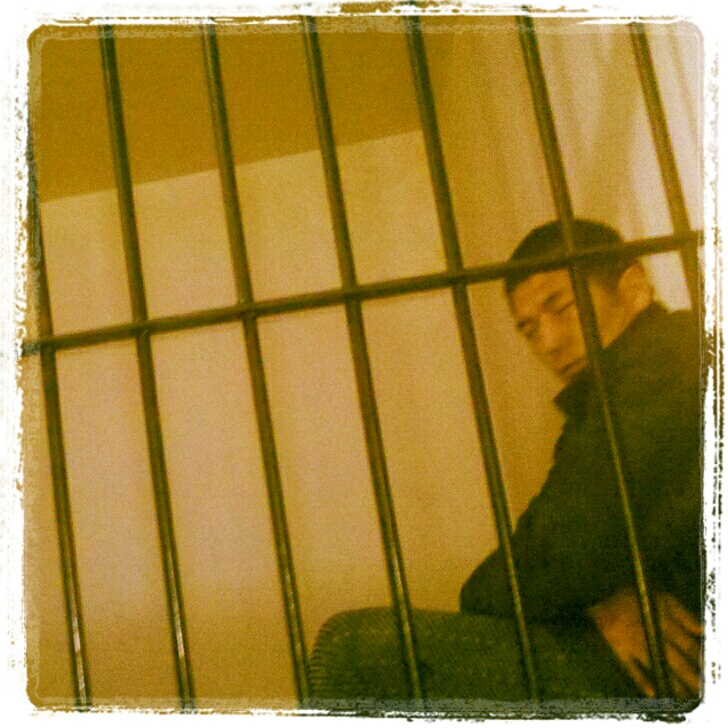 Finally they found a cop who could speak English. He came up to me and asked some simple questions, like where I live and my name. Then we had this gem of a conversation:

Police Officer: In China, we have a rule, you can’t go on the court.

Me: Oh really? I’m sorry, I didn’t know that but I completely understand. Won’t happen again.

Police Officer: Ok you can go now. Do you need a ride home?

Me: Nah, I’m all set buddy, thanks for letting me outta jail.

But this isn’t America. Anyways, I’m sure you’ll all be happy to hear that the Sharks ended up winning the game 113-102. I’d like to think I played a huge role in that.

Unfortunately, the Sharks still ended the season second-to-last in the league, with a record of 10-22. No worries, though.This season we’re going to win the league. And you can quote me on that

*Being a foreigner, my experience in no way reflects what its like for a Chinese citizen dealing with police. For better or worse there is always a HUGE double standard.

// Zach Etkind is the man behind the web series Donnie Does. Click here to read more about his antics.

Donnie, the world's premier Roger Federer impersonator and goose rapper, is currently staying with his ayi in rural China.

WATCH: Donnie try to sneak into the Rolling Stones' gig

Our favourite dumb Bostonian, Donnie, was, like everyone else, keen to see the greatest rock and roll band ever during their recent trip to Shanghai.

WATCH: Donnie Does... The Shark Knight

After receiving a lifetime ban from attending Shanghai Sharks games, Donnie must take extreme measures to remain a loyal fan

Why grow old in America when you can whip cans in China?

Donnie Does: The Shark Knight Rises

The notorious Donnie from the 'Donnie Does' web series hops aboard a boat and cruises the Huangpu with China's gigolo scene. Of course, Raz B, formerly of B2K, makes an appearance.

Donnie Does: Everything is illuminated (with Baijiu)