As his career enters its fourth decade, Tim Robbins has pretty much done it all. He won an Academy Award for his stirring performance in Mystic River, released a solo album four years ago and is about to star alongside Jack Black in the upcoming HBO comedy series The Brink. However, the Oscar-nominated director will be indulging his first love when his Actors’ Gang brings a workshop production of A Midsummer Night’s Dream to the Daguan Theatre from June 19-21.

“The dream wasn’t movies,” he says of the theater group he co-founded in 1981. “We were a combination of actors that loved European theater and punk rock. We stayed away from American realism and tended towards more exciting material that had a larger canvas. I’m proud to say we’ve never done a play with a couch before.”

Midsummer is one of Shakespeare’s more fantastical creations, an endearing comedic romance involving young couples and manipulative fairies in an enchanted forest setting. Past adaptations have played up the wonder but Robbins has gone for a minimalist approach.

“I’m a big believer of less on stage. When I see these kinds of productions with big sets and lavish scenery, I feel like I’m watching a theme park,” he says. “To me, theater is about the connection between the actors and the audience. The more bells and whistles you have, the less attention you pay to the heart of what the author is talking about and what the actors are trying to portray.”

The Shanghai shows features the same cast that performed it last year in California, and Robbins explains he first directed it in 1984, when he also starred as Oberon.

Pieces constantly evolve,” he explains. “It’s based on certain European companies that really take their time to develop a piece. Unfortunately, they’re state funded and we’re not so we have to be more economical. Usually we do a workshop production and if we’re interested in developing it, we’ll let it germinate for seven months and do it again.” 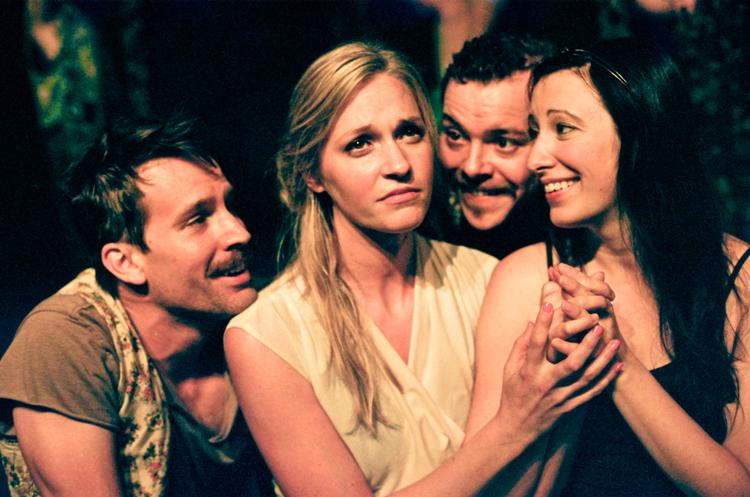 The Actors’ Gang has always been close to Robbins’ heart. He reportedly funded their inaugural 1982 production of Alfred Jarry’s Ubu the King through his salary as a waiter and early television work. It was a smart investment. The LA Weekly described the show as “a shot heard around the city,” with Robbins shining in the lead role as the madcap king.

Guest work on TV shows like St. Elsewhere, The Love Boat and Moonlighting increased Robbins’ visibility, leading to his breakthrough role in 1988’s Bull Durham. His turn in Robert Altman’s 1992 comeback film The Player elevated him to leading-man status, which was cemented by his stirring portrayal as Andy Dufresne, a man “who crawled through a river of shit and came out clean on the other side” in 1994’s The Shawshank Redemption.

Despite the jam-packed schedule, the Actors’ Gang very much remains core to him. As Founding Artistic Director, he’s overseen the production of over 100 plays in Los Angeles and the troupe has counted stars like Jack Black, John Cusack, John C. Reilly, Helen Hunt and Jeremy Piven as past members.

“What we have is rare,” he admits. “It’s a company of actors that have been together for over 30 years that still has original members in it. We operate as an ensemble and have a real sense of community.”

That civic-mindedness is evident in their education programs in working with inner-city youth and prison inmates. Robbins says their educational responsibilities have expanded over the past decade, an attempt to fill the void left by Californian budget cuts.

“Great art involves receiving everything around you and processing it in a way that’s productive,” he explains of the program’s impact. “Having empathy for people with less than you helps you be able to portray emotions of other characters and that makes you grow as a sentient being. I see it happen over and over again.”

Of course, philanthropy isn’t possible without a busy schedule and the Actors’ Gang will also take A Midsummer Night’s Dream to Beijing as part of the NCPA Shakespeare Festival and to Italy’s distinguished Spoleto Festival. The director is optimistic that China will become a regular stop on their international circuit.

“If the offers are there and timing is right, we want to go,” he says. “The theory is that we want to be able to pack up one trunk and go anywhere in the world to do a show.” Over a dozen years, Emilie Simon has crafted a reputation for experimental pop in the vein of Kate Bush and Björk. The three time Victoires de la Musique returns to Shanghai as part of the JUE Festival. Tennis' top players roll into town to take part in the Shanghai Rolex Masters. While the big three of Federer, Nadal and Djokovic have reigned supreme for a decade, Marin Cilic aims to build on his recent US Open win and barge into the sport's elite. Heart to Heart Shanghai is holding their annual holiday fundraising concert and a pair of 'America's Got Talent' winners will headline the evening concert while working with students during the day's Battle of the Bands. That's chats with 2010 winner Michael Grimm about winning the show, his upcoming blue eyed soul album and sitting in the judge's chair.

We chat with 2011 'America's Got Talent' winner Landau Eugene Murphy, Jr. about how the show changed his life and stepping into the judge's role on the eve of his co-headlining appearance at Heart to Heart Shanghai's annual concert to raise money for children's heart surgery on Dec 7.

Since debuting in late 2012 with productions of The Tragedy of Anthony and Cleopatra and Pericles, Shanghai Shakespeare has produced Mandarin adaptations of classic English plays. Organized by experienced Hollywood actor and drama director Thomas Caron, their next endeavor is Three Short Plays by Samuel Beckett.

Win tickets to 'The Complete Works of Shakespeare (Abridged)'

After a sold-out run last November, Urban Aphrodite is bringing back their production of 'The Complete Works of Shakespeare (Abridged)' for a weekend of shows from April 11 to 13, including a bonus adult's only late night show on April 12 where the audience is encouraged to buy the cast drinks as they perform.